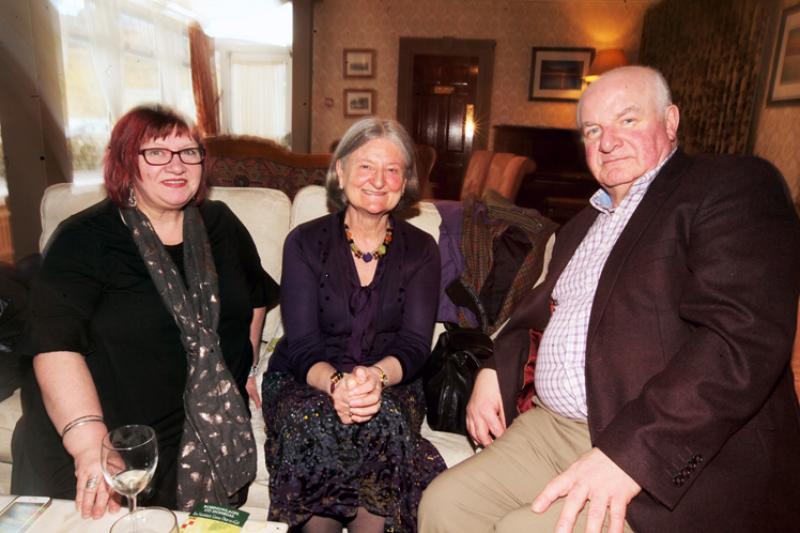 Pictured at the launch of the Micheal O’Cleirigh Summer School in the Sandhouse Hotel on Friday night are Isobel Cleary, Madeleine Cleary and Kevin Gilmartin. The festival runs from Friday 11th May to

The programme for the Micheal O’Cleirigh Summer School at Rossnowlagh on May 11 to 13 was officially launched in the Sand House Hotel on Friday by Cllr Tom Conaghan, Cathaoirleach, Municipal District of Donegal.

He recalled that Micheal O’Cleirigh and his three companions were the Four Masters who collected, arranged and illustrated the annals of the Kingdom of Ireland from the dawn of Irish history until the death of Hugh O’Neill in 1616.

Mr Conaghan said the school, which has been running for five years, was creating a very important vehicle for public access to the life and times of the Four Masters and to their painstaking and scholarly work.

He added: “The contribution of the Four Masters to our understanding of Gaelic history must be protected and passed on to future generations. Visitors to our beautiful county should also have access to the story of the Four Masters through many visible signs in this county of their legacy.”

Fergus Cleary noted that this year’s school will include the inaugural gathering of Clan Ui Chleirigh with a talk on the clan by Madeleine Cleary.

Committee member Michael McLoone noted a highlight of the school weekend will be an address by historian James O’Neill, author of best-selling book “The Nine Years War: 1593-1603”.

The war was waged between gaelic chieftains Hugh O’Neill and Aodh Rua O’Donnell and the English Forces of Queen Elizabeth 1 and led to the flight of the Earls and the plantation of Ulster.

Mr McLoone said: “I am looking forward to hearing about the nine-year war from someone who has written the definitive book.”

Reflections in the song, Roisin Dubh, recorded by traditional singer Maighread Ni Dhomhnaill, will feature in the keynote address to the school by her husband, former RTE Director General Cathal Goan when he will raise the question is the song truly about Ireland or was it about a friar’s love for a woman.

Further details on the school may be obtained on the website at mocleirigh.ie.