IT OCCURS TO ME: The five curses and more

A night in Dublin and a worthy cause to support 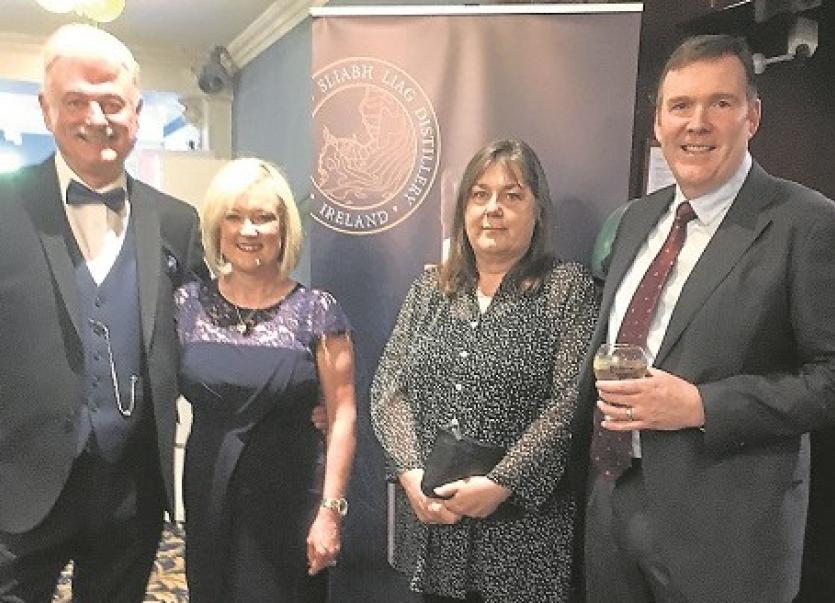 Frank and Caroline O Fiaich with James and Moira Doherty from the Sliabh Liag Distillery at the Donegal Association in Dublin gala night.

The Donegal Association Gala was a huge success in the Ballsbridge Hotel, with Shay Given receiving the 2017 accolade and Stephen McCahill handing over his well merited crown to the legendary Lifford goalkeeper.
Well done to Jimmy Harte on the exclusive interview with Shay.
I was delighted to meet Shay’s brother Liam, who was Students Union Welfare Officer when I was Mature Students Officer in the University of Ulster many decades ago….in fact, we hadn’t met for 30 years.
Mary B and Paul Gallagher, ably assisted by Mickey Joe Harte, provided the music and they were sensational, sounding as good as ever. Mary B was reminding me of turning up in a Dublin nightclub to support Pluto in a bands competition in 1973! They won deservedly.
I was delighted to meet up again with James and Moira Doherty from the Sliabh Liag distillery whose Silkie Whiskey and Dulaman Gin went down very well at the pre-meal reception. A very generous gesture indeed. For people who don’t know James, he is very much in touch with his Kilcar ancestry and as residents of Straleel, they have sent a big message to the locality where their business is based.
A few years ago, local councillor Niamh Kennedy said that while she accepted that people had a right to object to the Sliabh Liag Distillery, she also said the objections to the development were “akin to pressing the self destruct button”. When the Council granted the Distillery its planning application in July of that year, let’s remember with some 22 conditions and it was appealed by three parties to An Bord Pleanala. Those appeals were made by An Taisce and two residents living nearby.
A chief point in An Taisce’s objection was a claim that the site contravenes Donegal’s county development plan in terms of its location outside a main rural ‘settlement area’ like Carrick. For those unfamiliar with it, the Distillery is about a kilometre outside Carrick on the R263. Some concerns of local residents included their ‘first hand knowledge’ of the constraints of the water supply in the area as well as additional ones about traffic and environmental concerns.
For example, one resident noted that a condition applied to the permission would see ‘complete destruction of a century old hedge row’. Initially, the inspector from An Bord Pleanala tasked with assessing the appeal recommended the application be refused by the Bord. Subsequently however, An Bord Pleanala did not go along with that recommendation and upheld the Council’s decision to grant planning subject to the aforementioned conditions. Their argument was that the three points which formed the basis of the decision to refuse the plans would be adequately addressed by the County Council and the 22 conditions.
Council noted that the project would be of good enough economic benefit to the local area to justify its location outside Carrick and that strict conditions were in place for the developers to consult with the Council on effective traffic management and wastewater infrastructure.
The overall project is expected to generate 40 jobs for the locality and the developers did emphasise in their files that they’re satisfied the development is tucked under the R263 minimising any negative visual impact to this scenic area.
They also state that their waste water plans are far enough away from the local Owenree river and they have committed not to extract any water from that river in an effort to protect both public health, local water supplied and minimise any risk to the local environment. 22 strict conditions have to be met by those involved in the project and surely, if they meet the criteria, it is absolutely vital that James and co get the necessary support. Let’s remember that distilling is a long haul, and that whiskey is not a succès instantané, as the French remind us about good Champagne.
My great fear is that if the Sliabh Liag Distillery’s progress is thwarted even further, that…firstly, we will lose the great potential for jobs and tourism, we will most certainly lose James and Moira, whose commitment to the locality is genuine and heartfelt and that, crucially, to will scupper the plans of other budding entrepreneurs who may be considering ‘In Through’ as a place to do business.
I had the pleasure of knowing Father James McDyer who said he was determined to rid Glencolmcille of its “five curses”: the lack of water-supply, electricity, industry, paved roads, and a dispensary. Many of his decisions and far-sightedness were resented by some, but he, like St Patrick and the snakes, he got rid of the 5 curses.
In his autobiography he recalled the aftermath of the American Wake when, after the young person was waved off in the morning, McDyer recalled, “the father would enter the house to brood over the fire; the mother would sit out on a rock beyond the cabbage garden, and remain seated there for hours gazing in the direction in which here child had gone”. Many of them never to be seen again. James Doherty’s did the same, so wouldn’t it be the ultimate gesture for a returned son to afford him the courtesy and privilege of ensuring no American wakes for 40 or more local sons and daughters.

Saving Donegal Parish Church
A campaign has been launched to help renovate one of Donegal Town’s most iconic landmarks, Donegal Parish Church, whose tower and spire are in urgent need of repair.
The church, which was built in 1828, is one of the oldest buildings in the historic town centre and its second most-photographed building after the nearby Donegal Castle.
The church tower and spire are an instantly recognisable feature on the Donegal Town skyline. Every year, thousands of tourists visit the church and enjoy the peace and stillness away from the bustle of the streets, shops and hotels around the Diamond.
As the Church of Ireland reminds us: “The building is not simply an historic landmark; it is also home to a living community of faith, who seek to worship God and share the love of Christ with the whole community.”
This is done most tangibly through events like the parish’s community carol service, community open days, and the work of the Mustard Seed—a volunteer-run community tea room and prayer space along the riverside at New Row. The interior of the church has been largely unaltered since 1889.
Now, the tower and spire need attention. The mortar between the stones has failed, allowing damp to penetrate the structure and damage the stonework. In some places, the mortar is up to 90% defective and flakes of stone are beginning to come loose from the tower. Urgent action is needed to repair the stonework and to re-point the entire tower and spire.
The Archdeacon of Raphoe, Ven. David Huss, says it is specialised work, which comes at a price. “The cost of the entire repair project is estimated at €150,000.”
The parish is organising a number of fundraising activities over the next months. These will include a parish dance in the Abbey Hotel from 9pm to midnight on Friday 4th May.
On Sunday 10th June, there will be a sponsored walk from Glebe National School, starting at 3pm.
And on Saturday 11th August the parish will hold an evening cruise on Donegal Bay Waterbus, starting at 7.30pm. It also hopes to run an art exhibition and silent auction in the summer.
More details on all of these activities can be found at the parish’s new Facebook page, ‘Save our Spire Donegal’, which will also have details of how donations can be made. any support will be greatly appreciated.