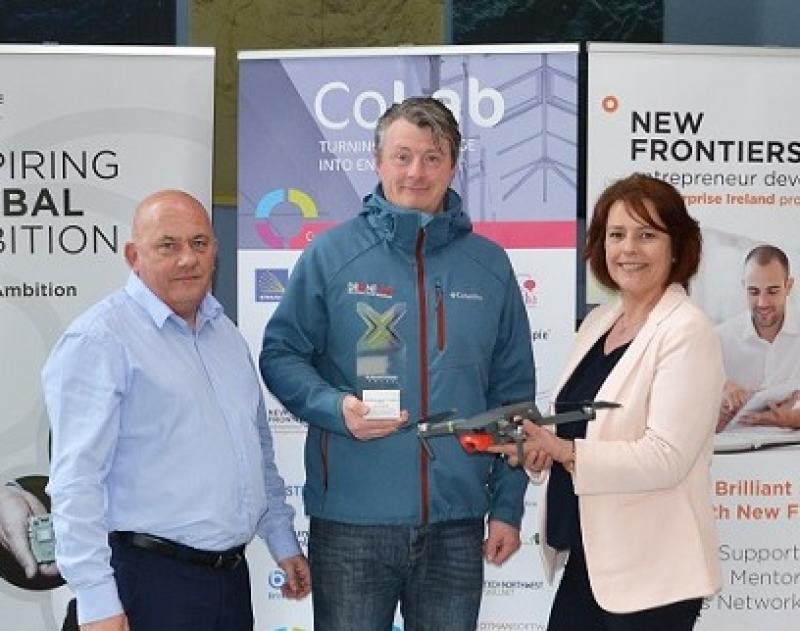 The company pioneered innovative software that essentially enables drones to be used as aerial assets during emergency search and rescue missions, saving time and ultimately lives. DroneSAR was the only Irish company chosen out of 55 entries worldwide to receive this prestigious award. The team is no stranger to receiving accolades, winning a top European Commission prize for their life saving technology, the “Copernicus Award” in 2016.

DroneSAR is revolutionising the global search and rescue sector with its software, which enhances commercial drone capability to be ‘an autonomous eye in the sky’. The drones can quickly find missing people in extreme terrain and weather, sharing mission-critical information instantly with emergency response teams on the ground.

Matthew Kelly, founder DroneSAR, explains this innovative application:   “The software automatically outlines the area to cover, it begins to search by itself covering vast areas in a much shorter time. Once the drone locates the missing person it shares the GPS coordinates and live camera feed with the search and rescue teams.”

“It’s all about time when you’re looking for someone and reducing the element of risk that first responders face when tasked to do their job, “ says Matthew, who went out with the Donegal Mountain Search and Rescue team on training missions. We quickly realised that drones helped significantly to increase situation awareness and the probability of detection. We found that a drone was particularly useful in areas that were difficult to access and traverse by ground search teams.  As as result, we developed new functions to further enhance the technology such as sharing GPS locations, receiving and transferring live camera feed and making it compatible with other devices such as, smart phones and tablets.  We wanted to ensure the drone could deliver real-time data from a scene so that informed decisions could be made by those responsible for co-ordinating the response effort.”

According to Matthew, whose mother is from Donegal, “We tried and tested what worked and what didn’t over an intensive 18 months period of perfecting the software. Donegal was the perfect terrain - it doesn’t get much tougher. If it works here it’ll work anywhere."

Matthew Kelly is an award-winning app developer who returned to Donegal whilst working on another project app for the Cliffs of Moher with Enterprise Ireland. He met Leo Murray, Leader of Donegal Mountain Rescue and R&D engineer at an Enterprise Ireland event, which resulted in a conversation about how technology could transform off-the-shelf drones into a more user-friendly support for search and rescue.

Matthew embarked on Phase 2 of the Enterprise Ireland New Frontiers Programme based in CoLab at LYIT.  “I’d still be in London if it hadn’t been for New Frontiers. Even with a good business idea, you need a good team behind you.” He says it was a very valuable programme, “We learned a great deal from experts outside our area on the course and from all those involved in the New Frontiers Programme too. The weekly pitches really stood to me in speaking to potential partners.”

The project quite literally “took off” when the software was selected for a European research project conducted with DJI (a leading drone manufacturer) and the European Emergency Number Association Association [EENA] an NGO based in Brussels. “This project sought to prepare a white paper on how drones could be applied during emergency first response and involved participation from search teams from Iceland, Wales, Demark as well as the Donegal Mountain Rescue Team,” explains Matthew.

DroneSAR is currently deployed by the Irish Coast Guard, Donegal Mountain Rescue and rescue services in Iceland, Denmark and Wales.
Aidan McKenna, Regional Director, Enterprise Ireland said, “Enterprise Ireland supports innovative companies with global ambition through mentorship, funding and providing a supportive and collaborative environment for business growth. DroneSAR is an excellent example of a company that has taken an idea, leveraged the supports available to them and created a product that has the potential to be a fundamental element of Irish search and rescue operations. This award is reflective of the innovation and commitment within the company and we look forward to continuing to support DroneSAR on its growth trajectory.”

Matthew believes that Donegal has a lot going for technology start-ups, “Being based in Donegal has really benefited us, not only in developing our product but in general, we’ve received great support and encouragement from New Frontiers, businesses in CoLab and the team there. We’ve found excellent talent at LYIT as well.  There’s everything here we need to go further. In addition, it’s a great place to surf.” Three out of the DroneSAR team are keen surfers.

So, what’s next? “ Well, we’re looking to release the app worldwide and the goal is that it’ll be used by emergency first response and search and rescue (SAR) teams around the globe. We’re also currently looking at version 2 of the software which will incorporate a range of additional functions including image recognition and satellite integration for post disaster emergency management,“ adds Matthew

New Frontiers is currently recruiting for Phase 2 in the North West. If you have a technology or knowledge based idea that you would like to turn into a commercial business, the New Frontiers Programme can help and support to accelerate your business development and to equip you with the skills and contacts that you need to successfully start and grow your company.  To find out more visit www.newfrontiers.ie or contact Jenni Timoney Programme Manager, Timoney.Jenni@itsligo .ie, phone Office: +353 71 9137378, Mobile: +353 87 6825024