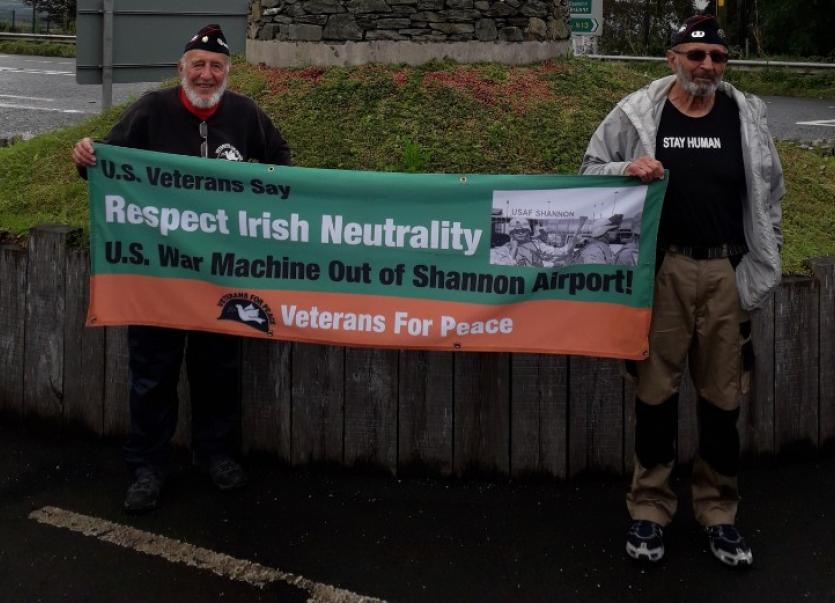 Trial of Tarak Kauff and Ken Mayers, US ‘Veterans For Peace’ arrested at Shannon activists scheduled for 2021

Two US ‘Veterans For Peace’ activists who walked Inishowen for their ‘Boots on the Ground for Freedom’ campaign, have had their passports restored.

The men, Tarak Kauff and Ken Mayers, had to relinquish their passports as part of their bail conditions, following their arrest at Shannon Airport on St Patrick’s Day past.

The pair, who appeared in Dublin’s Cloverhill High Court on Wednesday past (November 27), were told their trial would take place in May 2021.

Their bail conditions were subsequently modified, and their passports were returned.

Speaking to Donegal Live, Tarak Kauff said he wanted people in Inishowen and wider Donegal to know how much Ken and he had “appreciated the solidarity and support” of the Irish people.

He added: “I feel we now have lifetime bonds of friendship and solidarity to continue the struggle for justice, equality and for a just, decent, democratic and sustainable socialist world from wherever we are.

“My intention is to return to Ireland before the trial and continue the ‘Boots on the Ground for Freedom’ walk. I will try to bring some brilliant younger veteran friends, some of them Irish American, who can talk powerfully about the recent wars and the destruction they have seen directly, and how the US military and the corporations profiting from these wars are literally destroying the planet. They will also speak as Ken and I do, of how important to any chance of world peace, the Irish
voice can be, if and when it can proclaim real Irish neutrality and remove the US war machine out of Shannon.”

Tarak Kauff and Ken Mayers, first spoke to Inish Times in September past before embarking on their walk of Inishowen, part of their ‘Boots on the Ground for Freedom’ Campaign.

Tarak, who is from New York, explained the men had come to Ireland to protest against the US military's use of Shannon Airport.

He said: “Ken and I were part of a six-strong group from the States, which included two recent veterans who had actually been on those planes, with their weapons.

“We are from a group called "Veterans For Peace" and are protesting against the flights of rendition through Shannon, as well as the fact the US military is going through Shannon, back and forth, waging wars in the Middle East, which is actually opposed to Irish Neutrality.

“Irish Neutrality is being disregarded by your own Government and by the United States military. The wars, which are being waged are very destructive, to say the least.

“We came to Ireland to be part of the resistance to that and it turned out, the day we were in Limerick, St Patrick's Day, we found out a plane had landed at Shannon, which was believed to have US troops and weapons on board. Ken and I decided to make our way onto the airfield and inspect the plane, which the Irish Government is supposed to do but has not done, as far as we know. We made our way onto the airfield and had approached the plane, which was an Omni International aircraft hired by the US. After about 20 minutes, we were stopped. We were not too far from the plane,” said Tarak.

Tarak said: “We are getting quite a bit of support. We have been staying with different people, in different places. We started our 'Boots on the Ground For Freedom' walk from Limerick Prison on September 7 and would welcome others to join us in demanding real Irish Neutrality and saying no to war.

“We have had a terrific reception, really wonderful. The Irish people are very warm, very hospitable and almost exclusively, supportive because they believe in Neutrality and they understand it is being compromised and they are being compromised,” said Tarak.

Ken, who lives in Santa Fe, New Mexico said knowledge about the US military's use of Shannon Airport ranged from, 'I thought that had stopped' in 2005 to 'It has got to stop.'

He added: “Only one person out of hundreds has said to me, 'Well America is our great friend and we can't go against it.' My response has been, 'Friends don't let friends drive drunk and America has been driving drunk for 70 years and it's time their friends stopped it.'

“I went back to the University of California, Berkeley, to try to figure out how America had gotten so screwed up. I've been protesting American foreign policy for the last 53 three years in one form or another and have been in 'Veterans For Peace' since 1986.

“One of the ways we look at the world, is to say, 'Peace at home, Peace abroad' so, if we are opposed wars to anywhere, we've got to be opposed to wars everywhere. Tarak and I have both done a lot International work. We are very pleased with the reception in Ireland. However, make no mistake, if I'd known we were going to be stuck without our passports for six months, I would not have done it. I'm a little bit different from Tarak, I was scheduled to go on my honeymoon, on April 22. I'm looking forward to getting home,” added Ken ruefully.

Tarak added: “We will come back for trial because the whole purpose of going on the airfield at Shannon was to get a jury trial and make our case.”