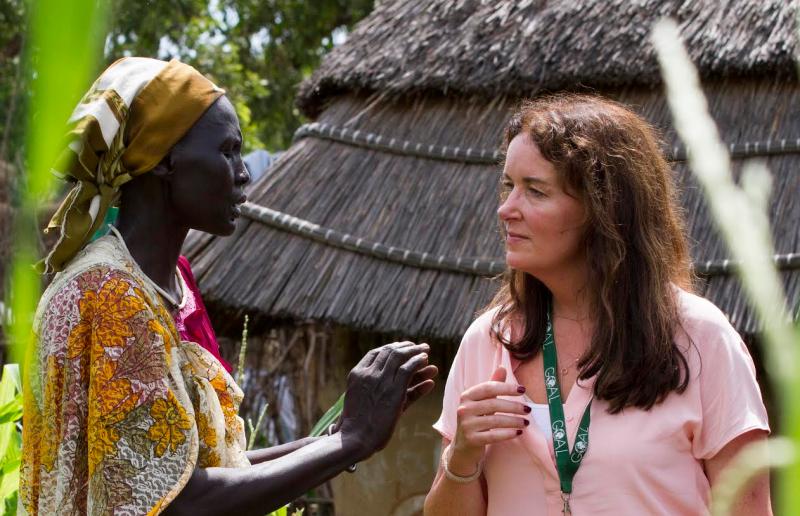 Broadcaster and columnist, Dr Ciara Kelly, is calling on people in Donegal to help humanitarian aid agency, GOAL, in its work providing life-saving support to refugees and displaced all over the world this Christmas.

Speaking at the launch of GOAL’s Far From Home Christmas appeal, Dr Kelly said it is entirely appropriate at this time of year to focus on the millions of men, women and children who have been forced to flee their homes due to conflict and natural disaster.

She said she was deeply moved by her visit to two refugee camps in Gambella, in Western Ethiopia, with GOAL earlier this year where she met women and children forced to flee South Sudan due to the ongoing conflict there.

“It was truly humbling meeting these refugees and hearing their life stories and the affect of their loss. I felt privileged to witness first hand the incredible work of GOAL in supporting refugees. I met the most inspiring, brave women forced to undertake dangerous journeys to escape violence,” she said.

“Their courage and resilience was nothing short of extraordinary. The power of the human spirit should never be underestiamated.”

Dr Kelly also said she will never forget one mother she met who spent days walking from South Sudan to safety to Gambella with her small children having lost her husband in the war.

“She showed me scars she had incurred on her legs from the violence in her homeland. Her focus was on protecting her children and getting them to safety and she was so grateful to GOAL for their help and support.”

Dr Kelly added: “My appeal to Irish people this Christmas is, as we gather with our families and our friends, to make a choice to help those who are Far From Home, who are unsure of what tomorrow will bring, and hope only for the safety, security and happiness that we so often take for granted. “

GOAL chief executive, Siobhan Walsh, said: “Right now, a staggering 70.8 million people around the world are displaced from their homes, in search of safety and refuge. Over a third (36%) of global refugees come from Syria and South Sudan alone, countries where GOAL plays a significant role in supporting affected communities.

“GOAL believes in the critical importance of supporting displaced and refugee communities through the provision of humanitarian aid, nutrition, food and health support and the delivery of livelihood programs. “

GOAL’s programmes in Syria, South Sudan, Sudan, Zimbabwe, Ethiopia, Honduras, Turkey and Niger all support people who have been displaced. Since 2014 GOAL has been to the forefront responding to the displacement of families in Syria. It is currently providing food and water to over 800,000 displace in the country

Last year GOAL supported over 5.5 million people in need in 13 countries all over the World.