The poster for the RNLI's Perfect Storm campaign

As Christmas approaches, the RNLI is issuing its own call for help as the charity’s volunteer lifeboat crews are getting busier. The charity is facing a ‘Perfect Storm’ with more people than ever needing its help, meaning support from the public is more vital than ever.

To ensure the RNLI can continue its lifesaving work this Christmas and into the future, the charity is running a major fundraising appeal, The Perfect Storm.

While many people will be thinking about presents, turkey and time with the family, dedicated RNLI volunteers from three lifeboat stations in Donegal will be ensuring their yellow wellies and lifejackets are ready for when the call comes and will be prepared to drop everything at a moment’s notice to save lives at sea.

In many cases, volunteers will need to abandon their turkey dinner and head to their lifeboat station when the call for help comes in.

The community lifesaving team at Bundoran RNLI, can remember one such Christmas back in 1998 when two surfers were rescued off the coast of Tullaghan, County Leitrim. The rescue was acknowledged by the RNLI with a written letter of commendation from the charity’s then chief of operations.

On December 28, a surfer raised the alarm that two others could not get ashore.

Helm Daimon Fergus takes up the story: "Tony McGowan, our lifeboat operations manager contacted the Irish Coast Guard in Malin Head and had our volunteer crew paged. Tony Cummins was at the helm along with Damien McNamara and myself. Our lifeboat, an Atlantic 75, was launched and underway within seven minutes. There was a south easterly force 5 offshore wind and a swell of 22ft at the time. The main challenge was the swell which was breaking over the breakwater and into the channel from the boathouse. I remember Tony had to time the swells and judge the right moment to clear the channel." 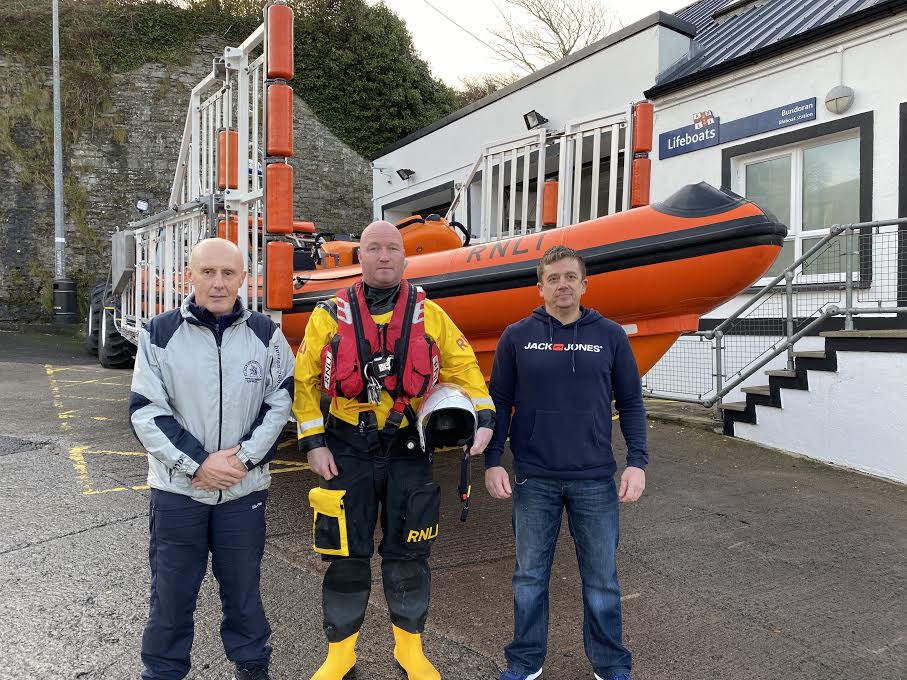 Once clear, the lifeboat ran before a quartering sea and reached the casualties at 4.22pm.

"We had been guided to the exact location by a shore party sent from the lifeboat station," Daimon continued.

"We swiftly managed to recover the two casualties and one surf board just to the north of the surf line. As we came back and approached the station, Tony once again had to time our return carefully because of the breaking swells in the approach channel. I won’t forget the fact that the first surfer squeezed my hand so tight that he bent the thick silver ring on my right hand into my finger and the ring had to be cut off when we got back to the station."

In commending the crew, the RNLI’s letter to the station read: "Although this service was short in duration, all those involved are to be commended for the alacrity of the launch, the contribution of the shore party, as well as the seamanship exhibited by Tony Cummins."

One of those surfers was Mark Ponsonby from Letterkenny who says he will be eternally grateful for the speedy launch of the lifeboat that day.

"It’s been over 20 years now since my brother and myself were rescued by the RNLI in the sea at Bundoran. I often wonder what would have happened to us or become of us if it wasn’t for the timely interaction and rescue by the RNLI services that day.

"In a matter of minutes, they had answered the emergency call and had launched the boat. The Irish Coast Guard helicopter was also tasked to come to our aid. The conditions we found ourselves in were extreme and treacherous and the timing was critical for that rescue as the light was fading fast, yet the RNLI volunteers didn’t hesitate to get to us as fast as possible. My family will forever be grateful to the RNLI on that day and will never forget what they did for my brother and me that day."

Now, as the current volunteer lifeboat crew prepare for Christmas 2019, they too will be ready and willing to respond should their pagers go off.

For Daimon who has been a volunteer for 25 years, Christmas is no different to any other time of year.

"We’ll still be on call ready to save lives and delay our own Christmas celebrations. We couldn’t do what we do without the support of the public. The RNLI has experienced a shortfall in funds, but we are rescuing more people than ever before. We are facing the Perfect Storm and are calling on people to make a donation this Christmas to ensure we can continue saving lives at sea."