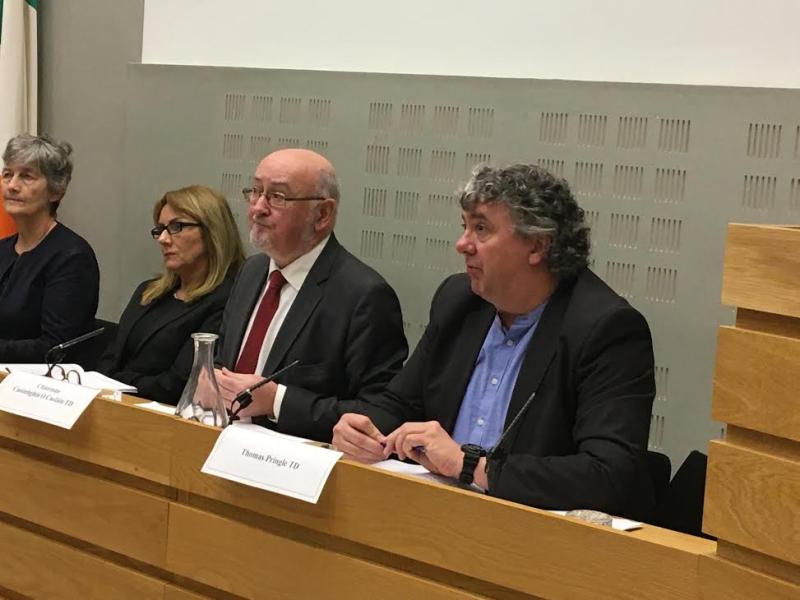 Deputy Thomas Pringle , right, at the launch of the Justice Committee Report

This week Independent TD for Donegal, Thomas Pringle and members of the Joint Oireachtas Committee on Justice and Equality launched their report on Direct Provision, recommending the urgent reform of the asylum reception system in Ireland.

Speaking on the report, Deputy Pringle highlighted that Direct Provision was established in 2000 as temporary accommodation for people seeking asylum in Ireland.

"It is a disgrace that, almost 20 years on, we have not come up with a better system for vulnerable people seeking refuge in this country.

“With over 70 million people forcibly displaced around the world, the Government needs to face the fact that asylum is here to stay. We need to stop focusing on temporary measures and develop a sustainable and humanitarian system for the reception and integration of asylum seekers.”

“With 1,500 asylum seekers currently in emergency accommodation, it is clear that the Government is still focusing on the short-term. Not only is emergency accommodation grossly inadequate in meeting the needs of asylum seekers, but many people are being placed there without going through the normal screening process. The ongoing lack of formal vulnerability assessments, which is an obligation under the EU Recast Reception Conditions Directive, must also urgently be addressed,” he said.

Deputy Pringle called for the establishment of an independent oversight body which would be empowered to carry out unannounced visits of Direct Provision centres and emergency accommodation, to ensure that the National Standards for accommodation for people in the international protection process are upheld.

“Despite the fact that asylum seekers have been given the right to work in Ireland, there are still considerable practical obstacles to accessing the labour market, including difficulties obtaining bank accounts, PPS numbers and driving licences. For a right to be effective, it must be accessible. Government departments and agencies must be proactive in removing these barriers,” he added.

Highlighting the over-reliance on for-profit companies to provide accommodation, Deputy Pringle stated: “We need to move away from commercial entities who are seeking to make a profit off the most vulnerable in society. Accommodation should be state-owned and state-provided, centred around the rights and needs of the asylum seekers themselves.”

He added: “While I am happy to be part of the launch of this report, the Government must ensure that these Justice Committee recommendations are taken on board and implemented. We have had a number of high-level reports on this matter, namely the Mahon report, which have only partially been implemented. I will continue to pressure Fine Gael to bring about this much-needed reform of the asylum process,” said Deputy Pringle.