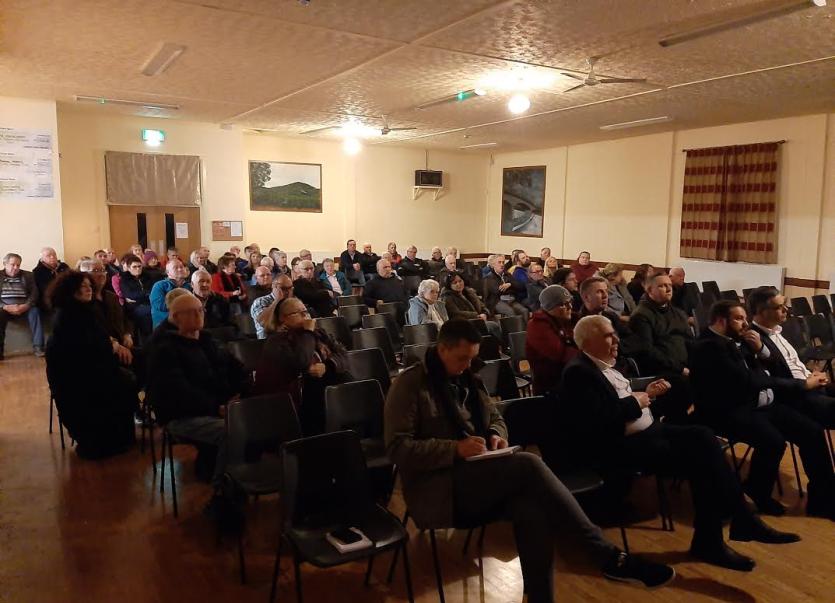 A programme of civil disobidence including blocking Lifford bridge and the entrance to Lifford Community Hospital were but two of the many radical proposals to emerge from a public information meeting in the town last night.

Well over 100 people turned out to the gathering which was organised by the Friends of Lifford Hospital Group in the social centre. They said they had decided to call the meeting now as it was understood the last two long-care patients there were going to be moved in early January.

Friends' chairman, John Quinn explain that despite all the assurances given to them by Fine Gael ministers over the years, including former health minister Dr James O'Reilly and current junior health minister, Jim Daly, the HSE seemed 'hell bent' on closing their hospital.

He said the committee had met everyone from health minister, Simon Harris, junior health minister, Jim Daly and accused the HSE of being "intransigent, dishonest and devious" in their dealings about the hospital and its future.

He slammed what he called the HSE's 'misleading' statements about consulting with the families of the last remaining long-care patients in relation to a proposed move to St Joseph's Hospital in Stranorlar at the start of January, adding the committee and indeed the general public felt it was part of the health authority's plan to ultimately close the hospital.

"They were hoping to move the final two long stay patients from Lifford to St Joseph's Hospital in Stranorlar so they could close down that ward but they have yet to tell us or the families concerned how the quality of care these people would receive would be any different to what they are getting now."

Mr Quinn added while they were not against any family's decision to move if they wished, it was wrong to suggest they [HSE] had consulted with everyone, he said.

He also criticised the decision by the St Joseph's Hospital committee in Stranorlar to stand alone in their fight to save their hospital saying it had weakened the efforts of both the Lifford and Ramelton facilities in their attempts to be saved.

He said even though the hospital was built in 1740 the building itself was still in excellent shape but the HSE and HIQA were changing the goalposts all the time in an effort to end all services there.

"Joe McHugh announced funds for all hospitals and community facilities over the past few weeks but not Lifford. They want us to fall off the radar but we're not going away," he said.

The committee and all speakers were particularly scathing in their criticism of sitting Donegal minister, Joe McHugh for his lack of support for their cause and his continual non-engagement with the people.

A powerpoint presentation by Friends' PRO, Gerry Burns, highlighted what they committee felt were the unequal distributions of resources within the health system claiming the Fine Gael led government had abandoned places like Donegal and Lifford in favour of towns where their own TDs held sway.

He also slammed Minister McHugh's inactivity using an empty chair instead of a photograph as he did for other politicians in his presentation, to highlight his lack of engagement pointing out during one recent occasion he chose to attend a 'kick the ball against the crossbar challenge' competition at a playing facility in Letterkenny rather than meet the committee and hear about their concerns.

"That's unbelievable and unacceptable," he added.

He added they hoped to bring the powerpoint presentation to as many towns and villages in the area as they could so people knew coming up to the next election what was going on. He said they felt the decision to move the patients was taken now leading up to Christmas in the hope people were too distracted to make a fuss.

"If we lose the hospital we will lose other services, we will lose a community, it's home to some people. Lifford town might be the administrative capital of Donegal but it's also a town with no banks, we have a dog track with no dogs, a military barracks with no soldiers, a garda station with no gardaí and now they are going to leave us a hospital with no patients," he said.

Indeed Cllr McClafferty, the only Fine Gael councillor at the meeting, admitted what he had heard that night was "a bad reflection on the party" and promised to do whatever he could to help their campaign and the campaign to protect all other community hospitals in the county.

General election candidate, Mary T Sweeney from new party, Aontú, said they would support the Lifford cause too.

Various speakers from the floor recalled their connections with the hospital and how important it had been for generations. Many agreed a programme of civil disobedience including such things as blocking the Lifford bridge, blocking the departure of the patients from the hospital in january - with the consent of the families concerned and protesting outside Minister McHugh's office in Letterkenny were options that should be considered.

The Friends of Lifford Hospital committee agreed to have one to one meetings with the two families in the coming days to plan their next moves but vowed the issue would be front and centre of any general election campaign in the coming weeks.