O'Connell Street in Sligo to close until end of April 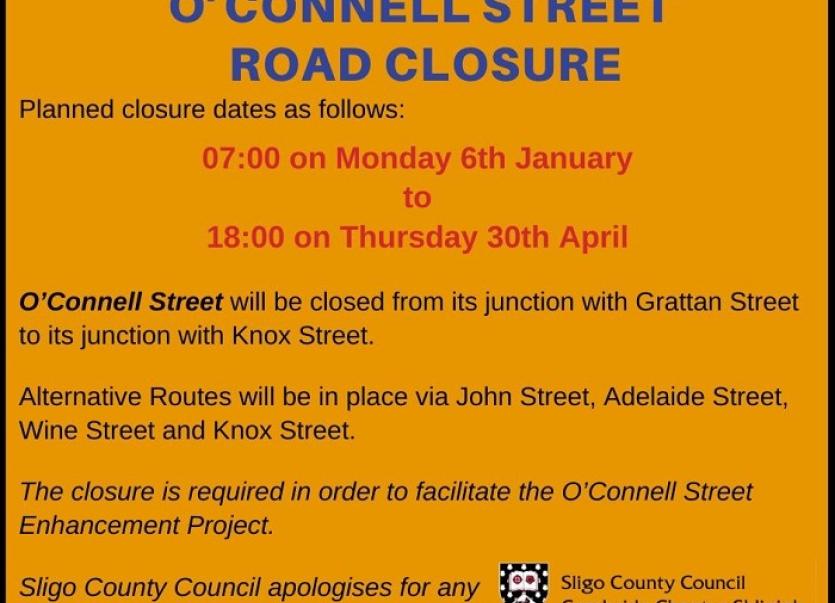 South Donegal drivers who commute daily to Sligo for work or shopping are warned that the town's main street, O'Connell Street is set to be closed from next Monday, until the end of April 2020.

The Notice of road closure at O'Connell Street will come in effect from next Monday, 6th January from 07:00 in order to facilitate the O’Connell Street Enhancement Project.

It is expected that the works will cause congestion and inconvenience to many drovers so be prepared to work in extra time, if you are heading south over the next couple of months.

This is the map of expected traffic flows in the absence of being able to travel down the town's main thoroughfare. 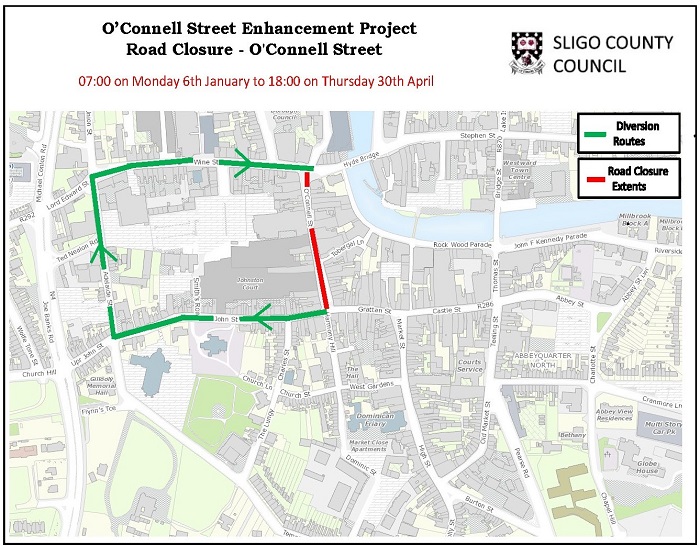 The project involves the refurbishment of Sligo’s busiest commercial zone and pedestrian thoroughfare. The main design ethos is to create an improved pedestrian zone by enhancing the quality and attractiveness of the urban environment. In addition, the project aims to create a permeable inter-connected metropolitan space that will facilitate commercial and residential opportunities for the undeveloped and underutilised sites, on and in proximity to O'Connell Street.

This project is the initial step in the provision of the Global Public Realm Strategy for Sligo City and, as such, is considered the flagship project on which the design ethos and rationale for other projects will be based. The O'Connell Street Project aims to enhance the image and setting of the street by upgrading its public spaces; conserving its built heritage; protecting its archaeological items; encouraging people to explore Sligo; and helping local businesses to flourish and develop.

The project includes works on O’Connell Street, at the northern end with its junction with Wine Street / Fish Quay and Lower Knox Street; along Lower Knox Street to Hyde Bridge; on O’Connell Street at the southern end with its junction with Grattan Street and John Street; and on the main body of O’Connell Street itself.
One of the key goals is to deliver an attractive urban space, with enhanced linkages to other pedestrian areas within Sligo, such as Tobergal Lane and the flourishing Rockwood Parade precinct, with its multitude of shops, bars and restaurants..