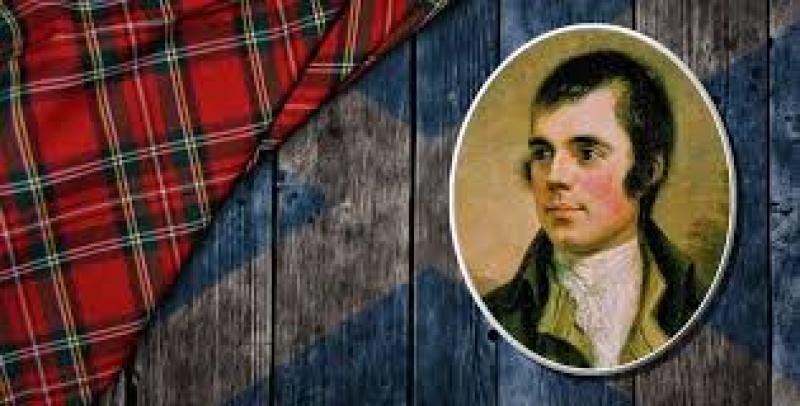 On January 25 every year, Scots and want-to-be-Scots around the world and here in Donegal celebrate Burns Night, the annual evening devoted to the Scottish poet, Robert Burns. The life and works of Robert Burns is most common celebrated with a Burns supper with friends and family.

Preparations are already under way in Newtowncunningham where a Burns Night, supper and ceili, will be held on Friday next, January 10, in the local Presbyterian Hall at 8pm

Robert Burns, or ‘Rabbie’ Burns as they like to call him in Scotland, was a Scottish poet and lyricist from Ayrshire and lived from January 25, 1759 to July 21, 1796, hence why people celebrate his life and work annually on January 25.

He is widely known to this day as the ‘National Poet of Scotland’ and his life and work is celebrated across the world. His influence has long been strong on Scottish literature and he was chosen as the Greatest Scot by his fellow public nation in 2009.

A lot of you will recognise some of his best pieces of work, including poems such as Auld Lang Syne which is also a song and is sung at Hogmanay [New Year’s Eve].

1.Get Your Music Ready

As your guests arrive, greet them with Scottish music. While it’s traditional for a piper to play live at a Burns Night, you can also queue up your Scottish playlist using Pandora, Spotify or Amazon Music.

Have a welcome speech ready to share conveying thanks to your friends and family for coming. After your speech, it’s traditional to say a Selkirk Grace, which was famously performed by Burns for the Earl of Selkirk.

Plan at least three courses for the Burns supper: soup course, haggis main course, and coffee. You can include others as well such as a cheese course or dessert course. While every course should be Scottish-inspired, the most important is your haggis course. When the haggis course is brought in, bagpipe music should be playing and either you or a guests need to recite the “Address to Haggis”. Don’t forget to toast with whiskey before everyone digs in!

4. Assign Guests to Give Toasts

After coffee is served, it’s time for toasts. You’ll need to give the first toast to honor Burns and it can be humorous or serious depending on your personal preference. A male guest then gives the “Address to the Lassies”. Originally a thank you to the women who prepared the meal, it is now a humorous view of women. A female guest then answers with a similar “Reply to the Laddies”, given in the same spirit. Pick these guests ahead of time so they can prepare and work together on their toasts.

Supper will end with the singing of Robert Burns’ most famous songs, such as Ae Fond Kiss, Parcel o' Rogues and A Man's a Man, and reciting of your favorite Burns poems. You or one of your guests can perform the entire set or your guests can take turns. It’s also acceptable to read poems from writers inspired by Burns. If you have guests from other countries, they’re encouraged to perform pieces from their country’s most famous poets.

Your fun-filled Scottish evening will end with you and your guests holding hands to sing Auld Lang Syne. Give one last toast to your friends, family, and Burns and start counting down the days until next year’s celebration. Enjoy this night full of tradition and merriment!