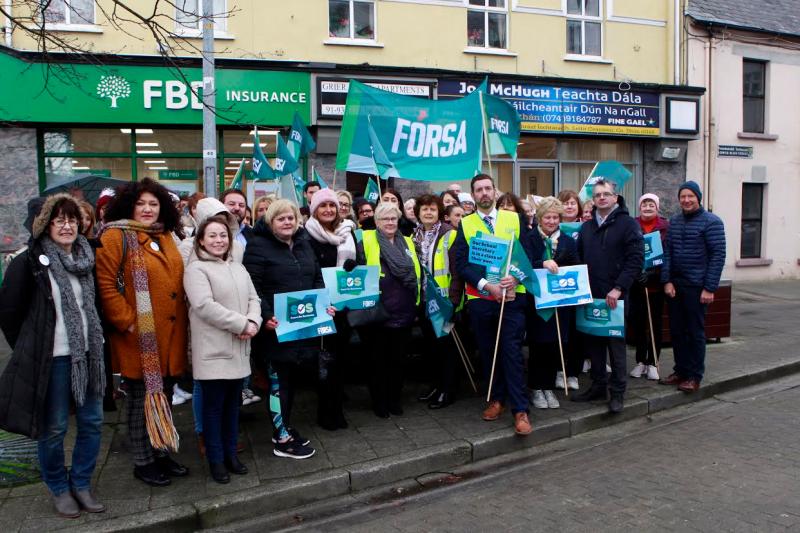 Over 60 school secretaries from all parts of Donegal and beyond descended on Education minister Joe McHugh's office at Lower Main Street, Letterkenny on Friday afternoon with one clear message - fix this mess minister.

Their protest is part of a nationwide strike at locations all over the country. The action by school secretaries represented by Ireland’s largest public service union, Fórsa, is to be followed by a resumption of their work to rule next Monday, which was suspended in October 2019 in order to facilitate discussions at the Workplace Relations Commission (WRC).

The ladies received a huge welcome locally with dozens of passing motorists honking their horns in support of their action.

The dispute is over the continuing two-tier pay system that leaves most school secretaries earning just €12,500 a year, with irregular, short-term contracts that force them to sign on during the summer holidays and other school breaks.

Fórsa represents more than half of the estimated 2,000 school secretaries employed directly by their school’s board of management and paid from the school’s ancillary grant.

Most of the remaining estimated 1,000 school secretaries are employed directly through the Education and Training Boards (ETBs), while a very small number, who were hired before 1978, are directly employed by the Department of Education.

The vast majority of school secretaries working in Ireland are women.

The decision to take strike action and resume the work to rule followed what the union described as an ‘insulting and derisory’ offer of 1.5% at the WRC last December. Talks have been taking place since October.

The resumed work to rule action will mean that school secretaries will withdraw from work on public service systems and databases. They will also refuse to carry out the functions of public servants. This is because they have repeatedly been refused public service pay and conditions over the last four decades.

Fórsa representative, Barry Cunningham, addressed the gathering saying as people were aware this was an ongoing dispute that centred around the lack of parity for school secretaries.

"There is a two tier system in the country that we are determined to see end. It's a predominantly female based workforce and they're treated in an appalling way. The majority of school secretaries will have to sign on during the summer and all of the holidays."

He said those protesting were upset the minister or no representative from his office were present to talk to them.

"If these people are not going to be treated as public servants, they are not going to do public service work. It's down to the minister to solve this. He said on the record in the Dail back in October that he wanted this issue solved so now it's time for him to come up with a solution, keep your promise minister" he said. 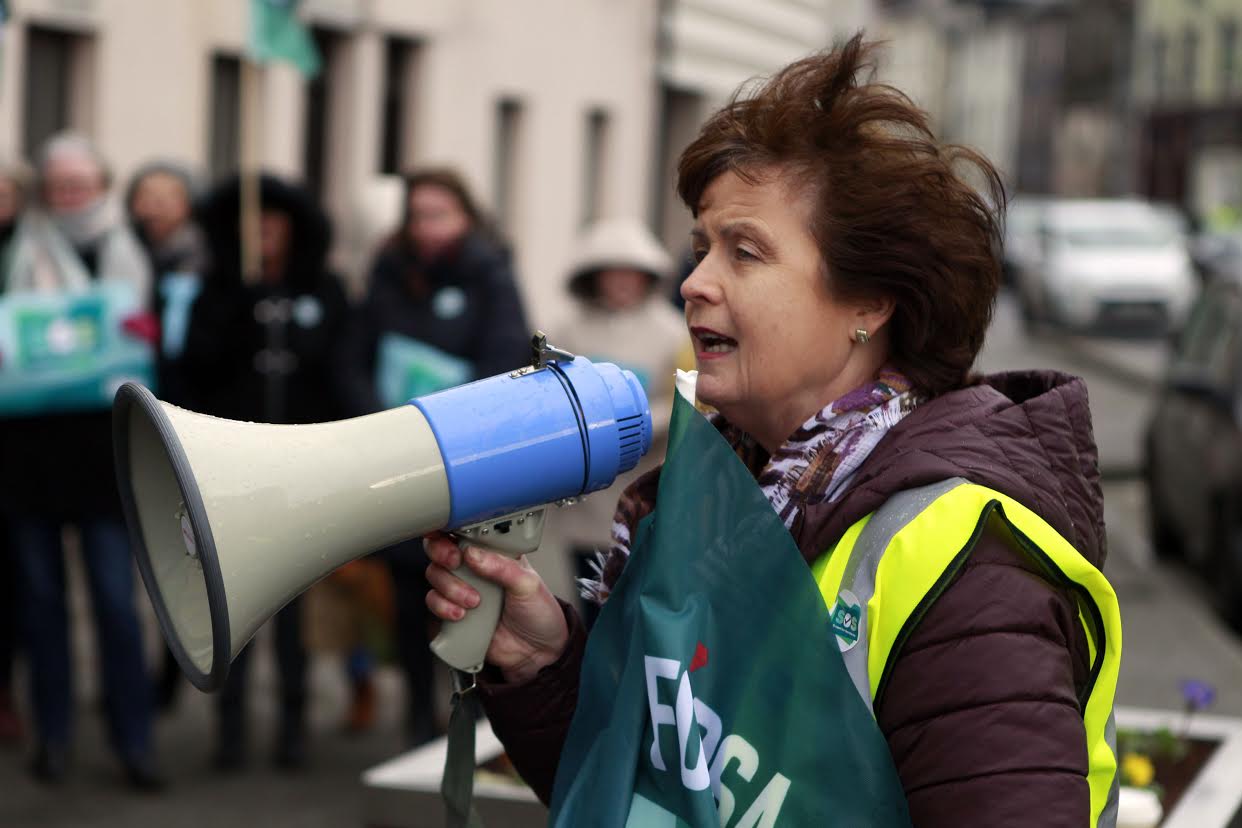 One of the local organisers, Kathleen O'Doherty (above) of the education division of the Fórsa union, said she was delighted with the turnout adding many school secretaries had already been on the picket line that morning at various schools around the county.

"I have great respect for Joe personally, this is not about him but he is Minister for Education and is well aware of the issue. He is in a position to right this wrong.Please Joe, whoever is holding this up, get it sorted and do the right thing," she said.

General election candidate, Mary T Sweeney from the Aontú party who is also a member of the board of management in Drumkeen National School, said she knew all too well as a teacher herself that no successful business or home could work efficiently without the secretary who in many cases was also an administrator.

"It's quite a thankless job at times but I have 100% support for them. The Minister for Education has let the side down again. You come from an educational background so why are you doing this? Why are people having to go on the street outside your office to fight for what they deserve, it's a disgrace, get it sorted Joe," she said.

"This should have been sorted out a long time ago, it's a disgrace. The secretaries have been campaigning for many years and have heard promise after promise but it hasn't happened to date. We're now in 2020 and it's time the Fine Gael government and Minister McHugh stepped up to the plate and give the ladies what they deserved. This is a massive own goal on top of all the other ones in this election year.

His party colleague, Senator Padraig Mac Lochlainn, who is also expected to be a candidate in the forthcoming election, said it was sad that the school secretaries were not getting the respect they deserved.

"A school is a public place of education and you have a situation where the teachers in that school rightly get a fair wage and a pension but the actual secretaries who are running that school are second class citizens. They're getting paid relatively poor wages and they have no pension and many of them don't even get paid during the summer holidays. It's outrageous.

He added the secretary also acted as an administrator for everything that went on at school and were often a point of contact for the public.

"My message to Joe is simple. He knows this is wrong, he knows this is deeply unfair, he needs to stand up to whoever in the cabinet or civil service who is blocking change and do what;'s right for the school secretaries. The minister needs to find some backbone and stand up on this issue

The last place these womens want to be today is standing out here in the frozen cold outside the minister's office. This is not where they want to be," he added.

Ms McGee said this was about inequality.

"If they were all male workers this wouldn't be happening. The school secretaries are the first point of contact for our students, parents and communities and an integral part of the whole system.

She added the minister held the key to sort the problem out.

"I heard him talk this morning asking the secretaries to come back around the table and engage with them again. Fórsa will come back around the table but if he was serious about sorting this out he would have sent his representatives to the Workplace Relations Commission (WRC) when they met last with some serious proposals and he didn't do that. In fact what came out was very very negative and if he was serious about sorting it he should have come with serious proposals. 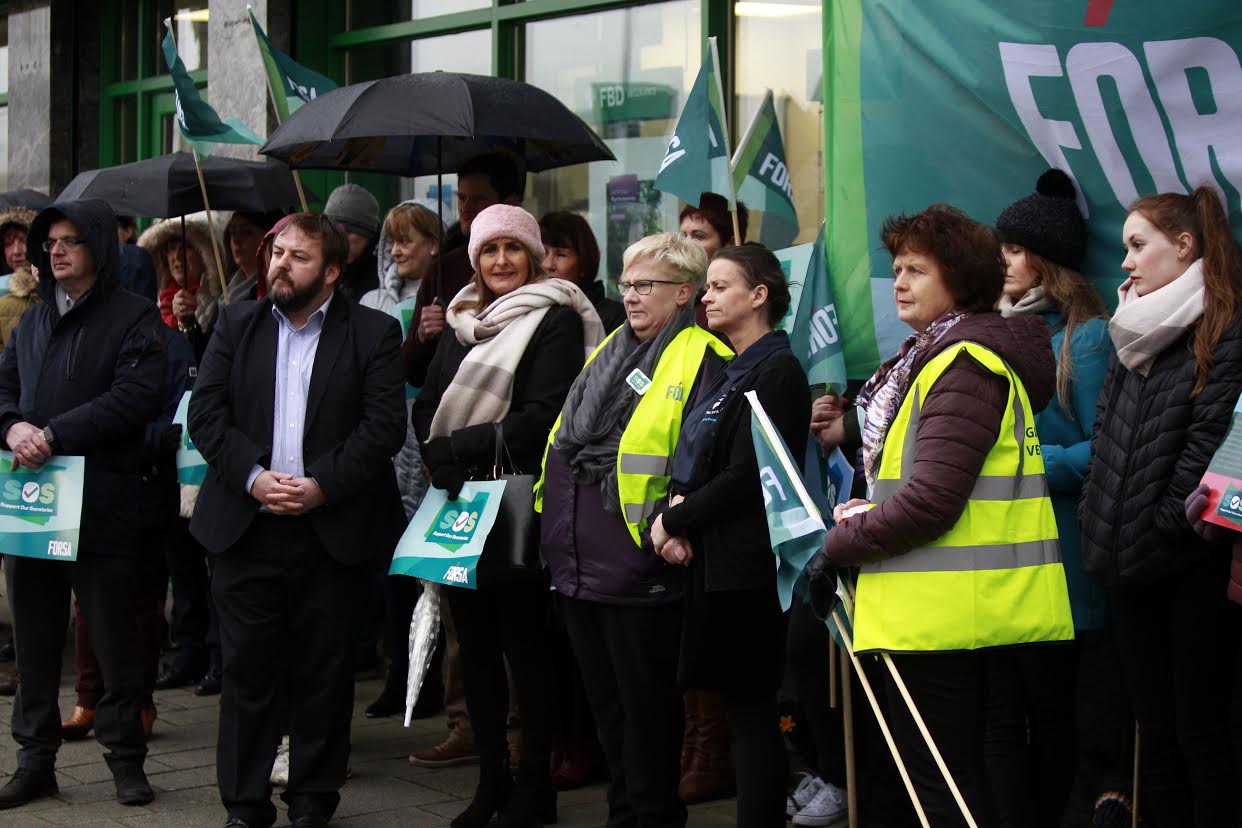 "We have the community, the trade union movement - SIPTU, Mandate, INTO, TUI, ASTI and parents behind us. I must say this has not been a good move for him in an election year," she said.

Ms McCarron added they were glad to be out supporting the secretaries.

"We are all together in this fight, it's important we show our support for them.

Mr O'Rourke also said they believed this fight was their fight also.

"It's absolutely ridiculous what is going on, they are basically employees of the State but are not being treated as such and that has to stop," he said.

Mr Crouthers said people needed to realise this wasn't a pay claim, it was effectively an equality claim.

"What the union is after is that school secretaries who work in non-department schools to be treated with fairness and equity. The fact people have to sign on over the summer and school holidays is simply unacceptable. Joe McHugh knows what the issue is, he knows how to fix it, the overall cost will be negligible and the Donegal public are behind the school secretaries," he said.

He added this action had been forced upon them but the message to the minister was clear.

"We are not going to go away. It's going to lead to an escalation of the campaign and it's in their hands to fix it," he added.