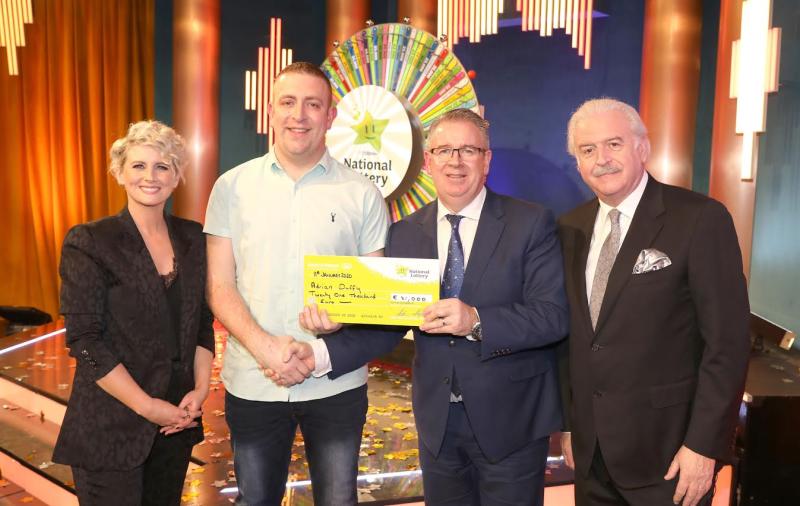 Adrian received his cheque from George Canavan, The National Lottery with programme hosts Sinead Kennedy and Marty Whelan present too

An Inishowen man has won a timely €21,000, just weeks after completing a major refurbishment of his new home, when he appeared on the Winning Streak National Lottery TV game show on Saturday last.

Adrian Duffy from Gleneely, moved into his renovated home just before Christmas and won €21,000 in cash from the popular RTÉ One show.

Five weeks ago, Adrian was sitting in the local pub enjoying a few drinks the night before his birthday (which was on December 8) when he got a call to say his name was drawn to appear on the next Winning Streak show, in January 2020.

Call after call came through and he spent the rest of the evening celebrating his luck while replying to calls and text messages congratulating him. What a start to Christmas for the Inishowen man.

Adrian was happy with having to wait five weeks for his Winning Streak appearance as he has just moved into his new refurbished home with his girlfriend Lisa. The couple, who have been together for more than five years, bought their first house in May, which needed a bit of work, so Adrian had been working away on it with every spare hour he had.

The couple moved in just a couple of days before Christmas. It has been a busy time for Adrian, who works as a Bid Manager for Boyle Construction in Letterkenny, where he has worked for almost three years.

Lisa, his parents Eileen and Charlie, and his sister Catriona, cheered him on this weekend from the audience. They were be joined by a number of Adrian’s friends and other members of the family.

In his spare time, Adrian loves sport and plays soccer for Gleneely Colts FC, where he plies his trade in centre midfield. He is also a keen golfer and plays off six. His local club is Ballyliffan Golf Club.