Killybegs group epitomises all that is good about Men's Sheds 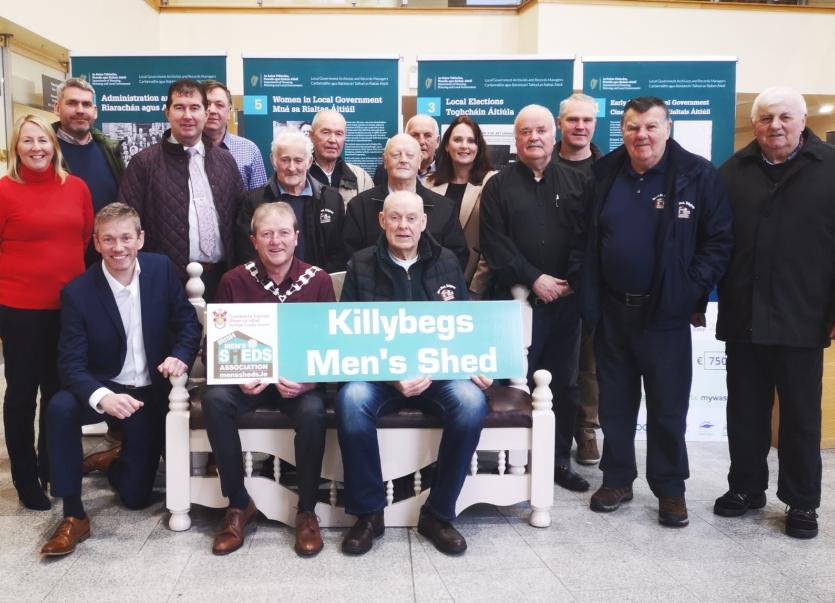 Members of Killybegs Men’s Shed have been praised for their recent national upcycling award and their contribution to their community.

The group were invited to the January meeting of the Municipal District (MD) of Donegal. They recently won the National Upcycling Challenge for their bench made from a bed that had been rescued from a skip.

The beautifully-crafted piece is currently on display in the Public Services Centre in Donegal Town.

Cathaoirleach of Donegal MD, Cllr Noel Jordan (SF) said: “It is a wonderful piece and totally deserves the award you got. I congratulate you on your ongoing success.

“I wish you all the best in the future. If there is anything we as Donegal MD can do to help, we will be happy to do so.”

Cllr Niamh Kennedy (Ind) agreed that Killybegs Men’s Shed had done a fantastic job on the upcycling project. She also praised the group for their work in Killybegs.

“It is great to call into the Men’s Shed,” she said. “They are always very welcoming.

“I appreciate all the work you do. So much effort goes into it and it is lovely to see. Thank you for all your participation and help with everything.”

He said: “There was a time when people went to the pub for company, when they could drive home afterwards. The Men’s Sheds have taken over that.”

Regarding the upcycling project, he said: “People from a different era re-used everything because you didn’t waste anything. That has come back round again.

“It is great to see that traditional skills being passed on to a new generation through the Men’s Sheds.”

“We can see that there is great camaraderie between you all and that there are great benefits to yourselves and in turn, in what you are giving back to the community. That is very valuable.

“It is great to see traditional skills and crafts being kept alive.”

“Years ago, people just lingered about the house in their retirement,” he said. “This lets people be very productive. It is great for your health, your family and your community.”

Cllr Tom Conaghan added his congratulations, praising the members for working together to achieve success. He added that many people - including some county councillors - could learn from that type of co-operation.

Pat McGinty from Killybegs Men’s Shed thanked management and councillors at Donegal MD for inviting the group to the meeting. He also thanked the Donegal County Council and Men’s Sheds co-ordinator in Donegal, Kathleen Bonner.

Mr McGinty had a particular word of gratitude for the Local Link bus service which ferried Killybegs Men’s Shed members to Dublin for the National Upcycling Challenge.

Mr McGinty said he himself had worked for 50 years as a carpenter and boat builder. He said other members had trades ranging from fishermen to bankers.

“But they all know how to make a cup of tea!” he said.

“We are really delighted with what we are doing. It is great fun.”

Mr McGinty said that there were four Men’s Sheds in the MD - Ballyshannon, Donegal Town, Killybegs and Meenaneary.

He told councillors: “You are all welcome to come in for a cup of tea and a bit of craic. We even do a bit of politics!”