Preparations move up a gear ahead of this weekend's general election

Donegal's islanders go to the polls on Friday 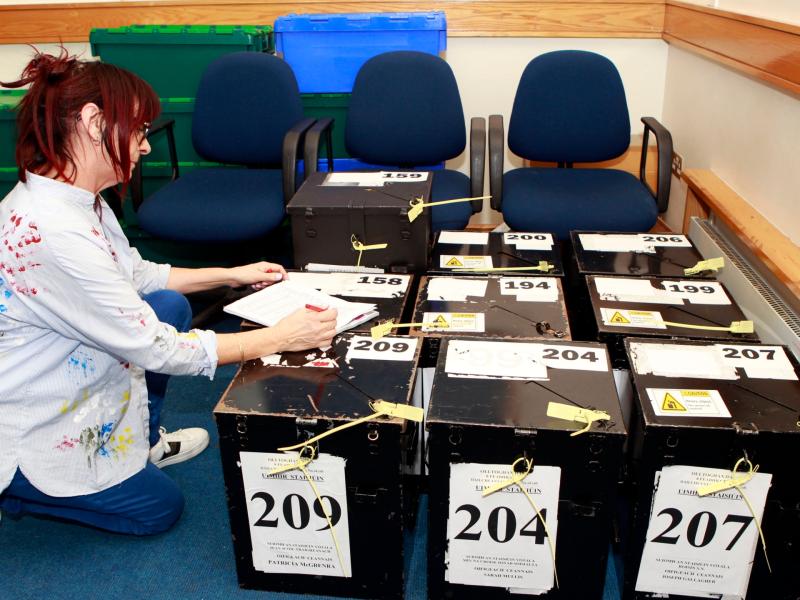 Ballot boxes are checked over for the last time yesterday at the old Letterkenny Courthouse before they are distributed around the polling booths in Donegal PICTURE: BRIAN MC DAID

As the first voters go to the polls on Donegal’s five inhabited islands tomorrow, (Friday), the feeling this week is that apathy has turned to anger throughout the five-seat Donegal constituency.
It’s thought the turnout could be as high if not higher than the last general election when the turn-out was 62.85%. It's also expected that there will be a good turnout in the Sligo-Leitrim constituency.
Change is predicted again in Donegal but where it comes from is open to debate with a number of contenders confident that they can upset the odds.
But it’s that race for the fifth seat that seems to be grabbing all the attention with a number of the runners believed to be in the final shake up for that last spot.
Predictions, pamphlets and promises have been the order of the day since the election was called back on Tuesday, February 4. However, over the past week or so the contest has intensified with all 13 candidates being put under scrutiny by an increasingly cynical electorate who feel the county has been once again edged out of its fair share of job creation, healthcare facilities, educational resources and infrastructural needs.
Several protests highlighting a range of issues have been organised over the past couple of weeks.
Indeed, this week alone in Donegal, TUI members have picketed outside a host of secondary schools while only yesterday, a protest took place outside Letterkenny University Hospital highlighting the lack of an acute stroke unit, and childcare workers also protested over pay rates and employment issues. 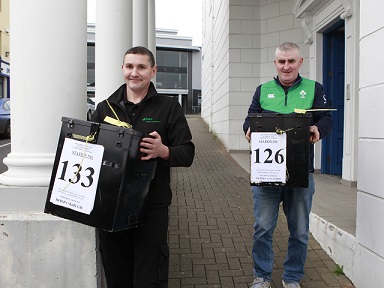 Dermot McGraine from Ballintra and Joe Harkin, Cresslough pictured in Letterkenny as they start to deliver the voting boxes around Donegal for the general election this weekend PICTURE: BRIAN MC DAID

The casting of votes will start tomorrow, Friday, February 7, on the islands where locals will vote in two polling stations on Árainn Mhór: Athphort and Leadhb Gharbh national schools between 10am and 7.30pm; Oilean Gabhla: James Sweeney's house, 11am-3pm; Inis Bo Finne community centre 11am-3pm; Inis Fraoigh at the county council premises at the pier, 12noon-2pm and on Toraigh at the local national school between 11am and 3pm.
Voting continues on Saturday, February 8 for the rest of the constituency. The 252 polling stations will open from 7am and close at 10pm.
Votes are due to be counted from 9am at the Aura Leisure Centre in Letterkenny the following day, Sunday.
To add to the occasion another major crowd pulling event, Donegal's NFL games against Galway take place just a few hundred metres up the road at O'Donnell Park will add to the expected congestion in that area on the day.However, the gardaí have revealed they will have a traffic management plan in place while the GAA will be adding extra stewards to minimise any problems
The weather may also play a role over the weekend as forecasters have predicted the election is not the only turbulance due this weekend as Storm Ciara is on its way.
Sunday could see an even stronger system hitting with winds reaching up to 130km/h inland with over 140km/h in parts of coastal counties.
Overall counting is expected to last well into the night in both Donegal and Sligo-Leitrim constituencies and if the last general election outing is anything to go it could be a long night given the number of candidates involved.