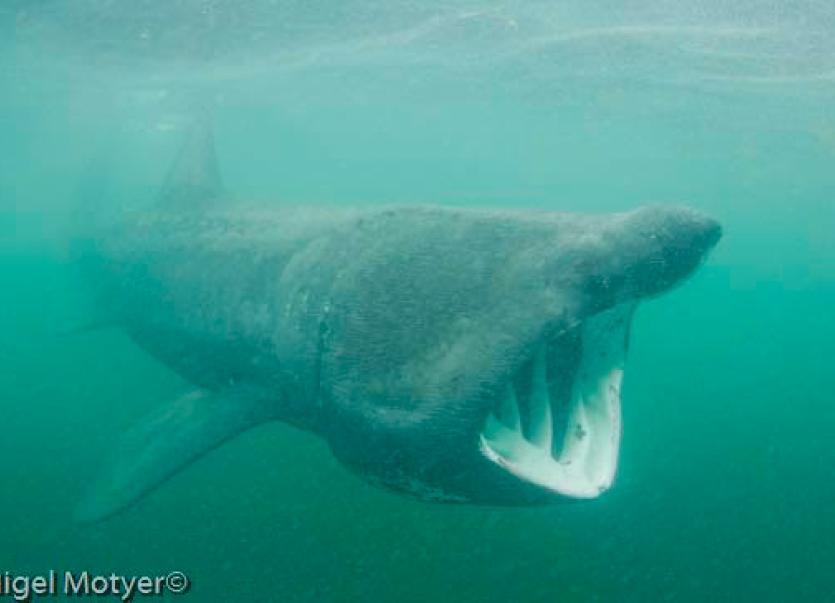 A Basking Shark glides through the water

And samples taken from Basking Sharks off the Donegal coast have played a major part in this discovery.

The study, led by the University of Aberdeen, and involving a wide range of collaborators including researchers from Galway-Mayo Institute of Technology (GMIT), shows that the Basking Shark also prefers to travel with family to familiar feeding sites.

The research published this week in Scientific Reports sheds new light on the migration routes of the sharks and outlines their vulnerability to environmental change.

Basking sharks, the world’s second biggest fish, can grow to more than ten metres in length and were recently classed as ‘endangered’ on the IUCN Red List.

Basking Sharks feed on plankton and in areas of the north east Atlantic such as the west coast of Scotland, Ireland and the Isle of Man, hundreds come together in surface waters during spring plankton blooms.

Often seen near the coast, these sharks have been shown to cross ocean basins and equatorial regions, diving to depths of more than 1000 m.

Basking Sharks were hunted regularly in Ireland from at least the 18th Century up to the mid-20th Century, especially off Connemara, Co Galway and Achill Island, Co Mayo.

In the 1950s over 1,000 sharks were taken annually from currachs in Keem Bay off the tip of Achill. Even in the 1980s Norwegian boats were still taking Basking Sharks from Irish waters, including off the coast of Co Waterford. 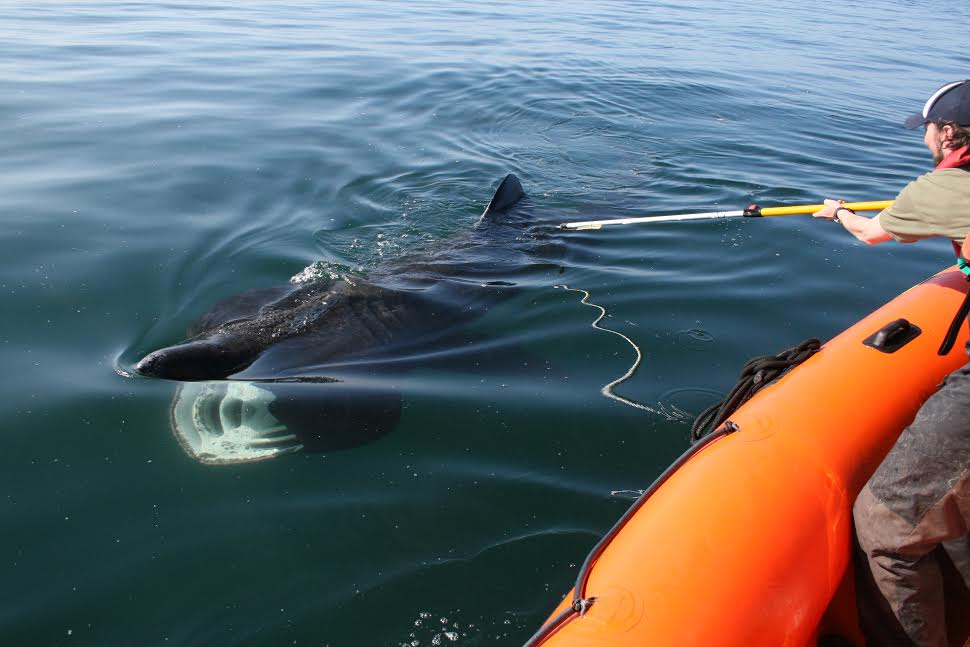 Up until recently very little was known about their biology as they only appear briefly at the sea surface each spring before vanishing into the ocean depths.

By developing a register of genetic profiles, scientists in this recent study were able to identify individual basking sharks when they arrived to feed. The results revealed that the fish repeatedly returned to the same feeding sites in successive years.

Dr Lilian Lieber, first lead author on the study, says: “Although developing genetic markers was challenging, the biggest obstacle to understanding how this endangered species uses the oceans was lack of DNA samples collected routinely from aggregations.

At the start of our study the relatively few available samples were from stranded sharks taken years and hundreds of kilometres apart, making them useless for population analyses”.

During fieldwork in Ireland by GMIT’s Dr Simon Berrow, member of the Irish Basking Shark Study Group along with Emmett Johnston, a breakthrough came when it was discovered that these genetic techniques worked on skin mucus samples collected off Malin Head.

Following this, researchers from Ireland, Scotland and the Isle of Man routinely swabbed aggregations of sharks quickly and with minimal disturbance, to obtain genetic profiles of individuals traveling together.

Some sharks were re-encountered within the same season and then again in following years, occasionally on approximately the same date in different years at sampling locations only kilometres apart.

While the authors suggest that individuals of such a wide-ranging, long-lived filter-feeder are likely cosmopolitan, meaning groups are expected to mix and be genetically similar, comprehensive sampling revealed the first evidence of genetic differences between populations.

One of the most surprising findings was that Basking Sharks sampled off Ireland in spring were genetically distinct from other north east Atlantic fish, including those sampled later in the year off Co Donegal.

Dr Simon Berrow, lecturer at GMIT, who sampled these genetically discrete sharks, says: “I like to get out early in the field season as you never know how long Basking Sharks will be at the surface. Sampling sites off west Kerry were convenient for us to deploy our research boat quickly when sharks appeared. Imagine our surprise when these sharks we sampled in March and April were genetically discrete from all others sampled in Britain and Ireland”.

The study suggests that these sharks may have overwintered near the US east coast before swimming back to Irish waters.

“Whether sharks off Kerry are unique or if research groups elsewhere sampled sharks earlier in the season they would get the same genetic differences is unclear,” adds Dr Berrow.

Widespread regular sampling revealed basking shark groups consist of individuals more related to each other than the rest of the population, indicating a tendency to travel as extended family parties following prescribed seasonal migration routes.

Dr Catherine Jones, study co-lead, says: “Perhaps relatives hang out together which could facilitate learning migration routes and encourage other cooperative behaviours. This means there’s more going on in basking shark aggregations than first appears in that they don’t fit the shark stereotype of a lonesome independent predator.”

Dr Jones adds: “Losing a group of kin together such as occurs during accidental bycatch, erodes variation rapidly, making these big, slowly reproducing fish less capable of evolving to cope with environmental change. That, and a tendency to utilize areas currently designated for development of marine renewable energy, may not produce a happy outcome, unless we see intelligent management of marine environments.”