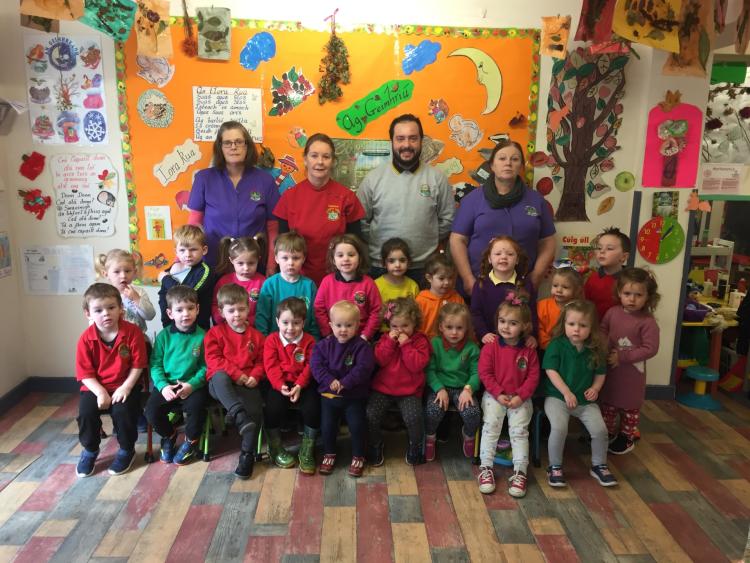 Naíonra Buncranncha which took part in Wednesday's march in Dublin

In an effort to highlight the mounting “crisis” in the early years education sector, Inishowen providers are to participate in a national day of protest.

The protests took place in Letterkenny and Dublin on Wednesday, February 5.

Speaking to Donegal Live before setting off for Dublin, Colum  Mac Lochlainn of Naíonra Buncranncha, said the national day of action had been organised by “various umbrella groups from the whole early years education sector.”

He added: “The Dublin march took place from Parnell Square down to the front of the Dáil in Kildare Street.

She said: “We will be protesting outside the offices of the Donegal Childcare Committee at 11.30am on February 5, to coincide with the Dublin event, to enable parents, children and  early years education sector, unable to go up to Dublin, to make their voices heard.

“Essentially, we are seeking a funding model for the early years education sector, which gives affordable access to parents, high quality education for children; and a sustainable model for providers,” said Stella Farren.

According to Colum Mac Lochlainn, the whole early years education sector is “completely and utterly underfunded.”

He added: “The chronic underfunding has gone on for years, for example, our government spends 0.2 per cent of its budget on childcare, while the European average is 0.8 per cent. That is a massive difference.

“The early years education sector grew up in a very ad hoc manner. The sector is now being professionalised, which is fantastic but that professionalism is not being matched by any sort of funding or resources, which is a big problem.

“The qualifications are Level 7 and Level 8, however Donegal has the lowest average wage in early years education sector in the state at just over €11 per hour, for somebody who may have a degree or a postgraduate qualification.

“In addition, we get no training days and our training is not paid for. If you want to undertaking training, it has to be done on a Saturday and you have to pay for it yourself. This is absolutely atrocious. Higher standards are being demanded, which is brilliant, however, this should be facilitated, for example, primary school teachers have already had two training days.

“The wage issue is also terrible. It is €11 per hour and Donegal is bottom of the pile. At the end of the day, if you are a professional, if you have a degree, Kay Mac Lochlainn [manager of Naíonra Buncranncha] has a degree and 20 years experience and she is getting paid not much more than that.

“Because of the low wages, there is a knock on effect on staffing. Pobal does an annual report on the sector and these are its 2018/2019 figures, the average wage in Donegal is roughly €11, in Dublin it is about €12. The low wages mean there is a huge staff turnover. Last year there was a 25 per cent staff turnover, which means one in four people left the early years sector. Graduates do not want to go into the sector. There is a massive problem with recruitment. For us it is hard to get Irish language graduates but on top of that is the general staff turnover problem. Most early years workers are only funded for 38 weeks in the year, which means they have to sign on the dole during the summer,” said  Colum Mac Lochlainn.

Mr Mac Lochlainn asked how could the early years education sector be expected to “attract and keep staff”, somebody who may have attended university and paid fees of €3,000 per year, while paying €11 per hour.

He said: “Early years education sector providers are now also faced with one of the two main insurers [Ironshore] pulling out of the market. The sector itself is in a constant state of crisis. We are in a funding crisis. We cannot get workers.

“If I could wave a magic wand, any new build for schools should incorporate a separate but same-site pre-school, so you have modern facilities. We also need proper, dedicated buildings. There is only one purpose-built pre-school in Inishowen.

“I would also introduce a sliding payscale, similar to that of primary school teachers. People deserve to get paid a proper wage if they have the proper educational qualifications and experience. Why should early years sector workers be on minimum wage?  The early years infrastructure needs investment.

“I think the government is putting out a whole load of band aids and sticking plasters on the whole early years education sector, which has resulted in massive under funding. At the end of the day, 25 per cent of services lost a worker last year. We cannot get workers to stay in the sector,” said  Colum Mac Lochlainn.

On Wednesday next, the early years education sector will be demanding: increased funding for the sector; a  sliding payscale for workers; proper infrastructure; training days for staff; and an alternative insurance provider.

Colum  Mac Lochlainn concluded by saying his message for Donegal's five incoming TDs was “if early years education sector providers are being inspected four times a year, treat us like an educational establishment.

“Pre-school in 2020 is a school. It is education and should be treated like a school, in order to give children the best start in life.”