Pringle confident he can retain his seat

There could be three left-wing TDs in Donegal he says 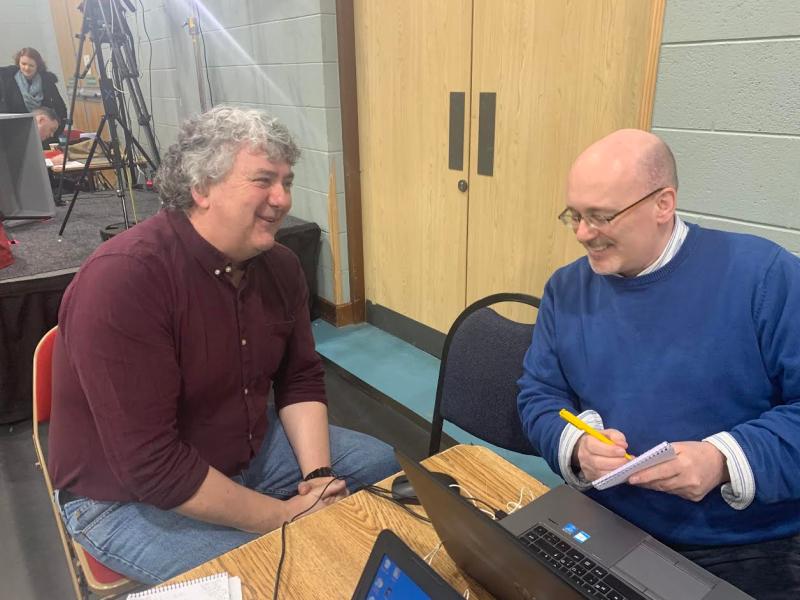 Thomas Pringle, left, talks to our reporter, Connie Duffy at the count centre this morning

Outgoing Killybegs-based deputy, Thomas Pringle, is confident he can retain his seat today.

He is bolstered by the fact the examination of transfers for him are looking good.

Speaking this morning, Mr Pringle felt there was a wind of change blowing towards a left-wing government in Ireland and that included Donegal too.

"Based on the sample of Padraig Mac Lochlain's surplus we looked at yesterday,(Sunday), and what's happening here this morning, I appear to be doing very well. I think I'm getting about two-thirds of Padraig Mac Lochlainn's transfers which means this could translate into 400-500 votes which means it will close the gap between myself and Pat the Cope Gallagher," he said.

He added he should move up the table and then it all came down to the other elimination.

"I think I'm going to benefit more from everybody than the likes of Pat the Cope Gallagher or Joe McHugh so that's going to stand to me," he said.

He admitted he was in a "much happier mood" than this time yesterday.

"I think, and this could be the greatest quote ever if proved wrong, but I think I'm going to be alright."

He said he felt part of the reason for this was the transfers he received from Sinn Féin,

"I think the left-wing factor made the difference. In a normal election you would expect Pat the Cope Gallagher to benefit on a geographically basis but the mood for change is here and we felt that very clearly on the doorsteps.

He added he would relish the prospect of three left-wing candidates representing Donegal in the next Dáil, although felt it would be even better if it was five.

"It's a positive thing and if we end up with an alternative government that doesn't include Fianna Fáil or Fine Gael that's good for Ireland."

He denied he had missed an opportunity at the last election to support the government and perhaps get a deal for Donegal.

"Row in behind Fine Gael, not a chance. It would be a betrayal of myself to support Fine Gael and that's nothing against the people who support the party, there are good people in it, but Fine Gael and Fianna Fail are right-wing parties and from a personal point of view I wouldn't feel comfortable supporting them.

"Would I have wanted to be there for the past three years with the homelessness crisis and health crisis to get some wee handout for Donegal - I don't think that's the way I'd want to do it," he said.

Asked If he would consider any offer from Mary Lou McDonald to help put a coalition together to form the next government, Mr Pringle pointed out that he had said throughout the campaign that what was needed was a left-wing alternative.

"Sinn Fein have come on board for that as the campaign developed and in reality if the numbers are there we should put it together. The next best option would be to force Fianna Fail and Fine Gael on to the same side, whether that is in opposition or in government," he said.