A rural Donegal community has said an emphatic no to any proposals that would involve prospecting or mining for gold in its area.

Residents in and around the Donegal town area voiced major concerns after during a meeting, which was organised by the Save the Hills of Donegal group attracted upwards of 70 people to Tawnawilly Community Centre on Tuesday night.

Its spokesman, Denis Slevin, outlined how people form all over areas surrounding the Bluestack mountains region had come together to oppose prospecting licences were advertised last year.

He said the issue came closer to home for people living in and around the Donegal town area over the past few weeks when a number of locals noticed "unwelcome visitors" on their lands who were digging holes and taking samples without permission.

"When challenged they said they were form Omagh Mineral Company and only after being challenged did they produce a letter asking permission. We believe they were in the area for a number of days.

"A few locals told them in no uncertain terms they weren't wanted around here. I met them and told them to get into their jeep and head North again.

"One person from the company called to a house and indicated they were interested in gaining access to the nearby mountain but were told there were over 155 shareholders in that mountain and they wouldn't be welcome on it either," he said. 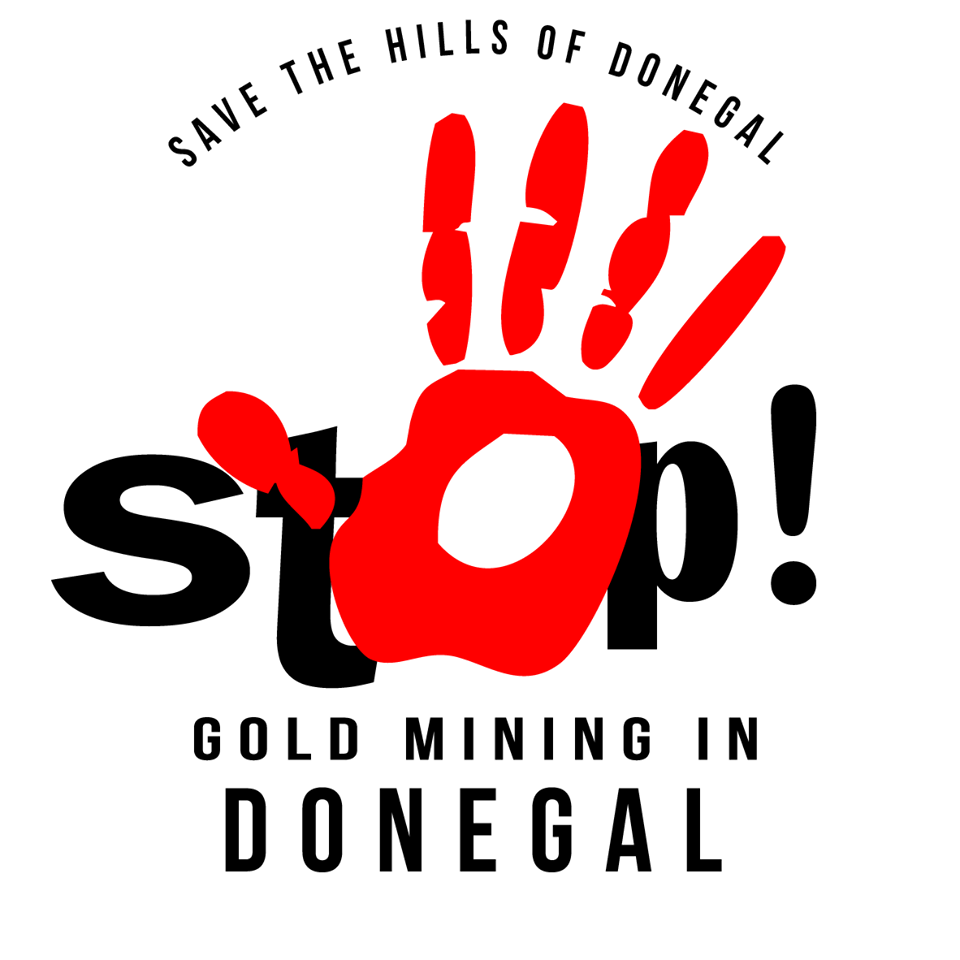 He added all the activity prompted them to call the public meeting and invite representatives from the Save Our Sperrins (SOS) group in Tyrone to outlined their experiences dealing with a multinational mining company who were also prospecting for gold in the Greencastle, Rouskey and Gortin areas outside Omagh.

"It's frightening what's going on in our little island. We haven't got backing from government parties anywhere along the way; we the people are on our own in this," he said.

"We've discovered they [the government] are advertising Ireland as being open for business when it comes to mining and mineral prospecting and they are trying to attract companies to come here and operate.

"These big multinationals will happily come in here, desecrate the place and walk away, they don't care. They might offer a few light bulbs, fix a few potholes on the roads, a few wee jobs but believe me its small pittance when you can't to the kitchen sink and drink your water. We all have to be very aware where this is going," he said.

Another member, Freda Walsh, outlined how one company did withdraw from prospecting around the Coimin, Glenfinn area when locals made their opposition known but added they remained vigilant to ensure they didn't return.

Guest speaker, Fidelma O'Kane from SOS outlined their campaign against prospecting efforts by Canadian company, Dalradian Gold and how they felt it was important to protect the community against any threats to the water, air, land and health from the toxic pollution generated by gold mining.

She said like Donegal, they lived in a designated area of outstanding natural beauty with special areas of conservation and areas of special scientific interest nearby but this took second place as the authorities who seemed determined to allow mining to go ahead.

She said the company had currently lodged a 10,000 planning application to develop an underground mine which would use blasting with explosives and cyanide to extract the gold from the rock.

The proposed site overlooked Greencastle village and was 1200m from the local primary school and playgroup and other facilities. She warned the production process and created acid water and other harmful metals such as mercury arsenic copper, lead, zinc, chromium, cadmium, nickel and iron which carried obvious threats to the water supplies, people, animal and land.

Reading from the government promotional material at the event Ms O'Kane said it outlined how Ireland had "favourable policies with strong government commitment", "a modernised minerals development bill", "streamlined permitting procedures", "pragmatic environmental requirements", a flexible royalty regime" - so many incentives she added "it sounded like the RHI cash for ash scheme in the North".

She produced a map from Geological Survey Ireland showing how the whole country was available for mining and all of Donegal, excluding Glenveagh National Park. Twenty-two licences had already been issued for the county and more were available, she said.

Locally she said it showed Omagh Minerals, a wholly owned subsidiary Galantas Gold, Canada, had been granted three prospecting licences for areas between Lough Eske and Lough Derg including Tawnawilly and Meenadreen.

In Northern Ireland their licences extended right to the border near the Dearg Line not far from Castlederg.

One speaker said he chased prospectors looking for uranium back in 1980 and he would have no trouble doing it again.

"I chased that company with a shotgun when I caught them drilling in my land. I still have that same shotgun, no one will come in and drill on my land," he said.

Ms O'Kane said no one could go on to anyone's land without prior permission.

More pictures were produced showing how the mining in Tyrone had affected the local environment and landscape and how hundreds of bore holes had been drilled with the consent of some farmers, much to the displeasure of others who were against any prospecting and this had caused division within the communities affected.

She also explained how companies provided incentives to local groups and clubs in their area by way of support funding as long as they got an undertaking these bodies would not criticise the mining and agreed to be used for publicity purposes. 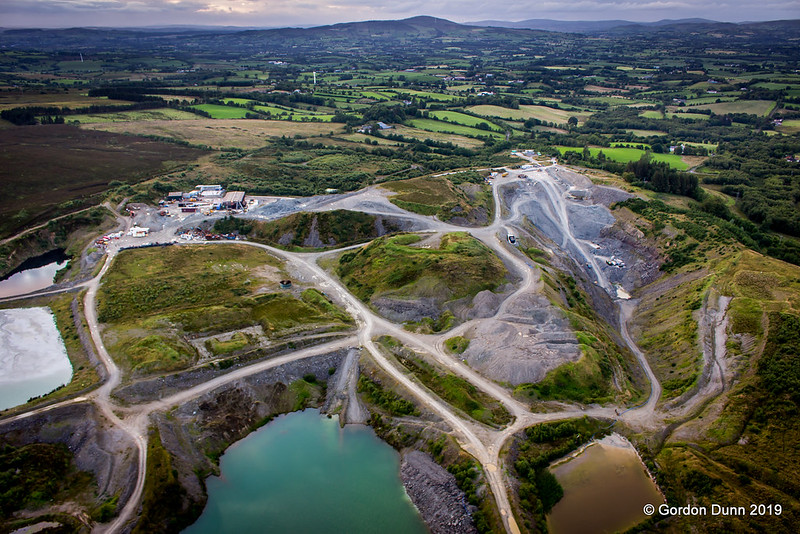 An aerial view of the current Galantas operation outside Omagh

"These companies don't come to prospect for nothing, it's going to lead somewhere. Omagh Minerals are looking for base metals, gold and silver. They are getting your taxpayers money through incentives and grants and no doubt the gardaí will be called upon to provide them with security. Government departments give them a lot of time and help but the green clean image of the country could be destroyed. Mining will devastate the environment and people's health," she said.

She urged everyone to inform themselves of the dangers of gold mining and write in and object even at this stage. People should also refuse mining companies permission to go on land, lobby local politicians, erect posters objecting to mining in homes and on land.

"If they have taken soil samples from your land without your permission that is theft. If you meet them with it demand it back, they can't take your property. Contact their office and ask them to return it to you and report it to the gardaí," she said.

Ms O'Kane also cautioned about the allure of jobs being created adding there were few with mining expertise in this area and other jobs promised were only turning out to be short term affairs.

"In fact we will lose jobs in farming, fishing and tourism if this goes ahead," she warned.

Numerous concerns were raised by a number of speakers while local councillors, Niamh Kennedy, Michael McMahon, Bary Sweeny, Tom Conaghan and Noel Jordan all indicated they would play active roles opposing mining at municipal district and county council levels. Another councillor, Michéal Naughton wasn't at the meeting but indicated to the group earlier he would also support their stance.
There was criticism by one speaker of the Green Party for its lack of activity expressing concerns in this area.

MC for the night, mayor of Donegal town, Pauric Kennedy, also stressed the importance of the entire community working together on this and urged everyone to inform themselves on everything to do with prospecting and mining.

It was agreed further meetings would be held in the Drimarone, Leghowney and Pettigo areas shortly. A number of specially made anti-gold mining/prospecting/trespassing signs were made available at the end of the meeting for local landowners to erect on their properties.