Markings on whale stranded on Donegal beach tell tale of great battles 8, 000 feet below the surface 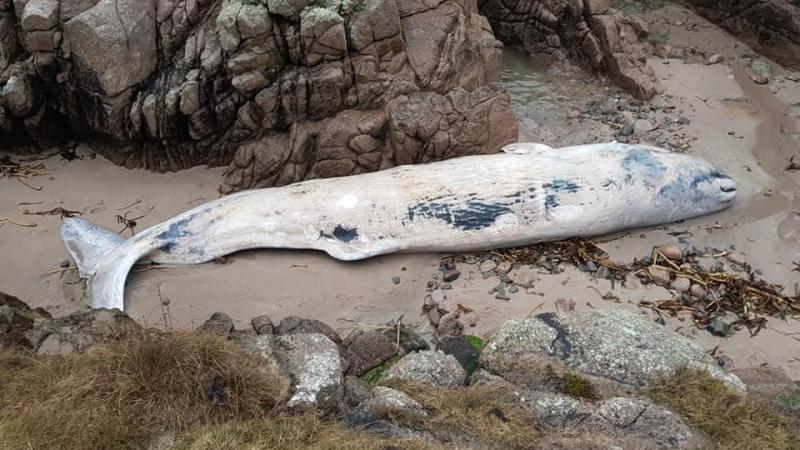 A sperm whale measuring almost 10 metres  in length has been found stranded on a Donegal beach, and it has tales to tell.

The Donegal branch of the Irish Whale and Dolphin Group (IWDG) believe the stranding on Cruit Island is interesting for a number of reasons.

Firstly, the sperm whale is female. Females are not usually seen at this latitude. They usually remain with their calves at the Azores, with only the adult males making the journey north to the Arctic Circle.

Another exciting discovery was the presence of squid ring marks all over the whales body.

According to Donegal IWDG: "This is totally natural but very interesting to see up close. These animals feed mostly on large squid and must have great battles at depths of up to 8000ft."

Also worth noting was the condition of the whale's teeth. They are well worn, suggesting an older animal. Given that these animals can live for more than 100 years, she could have been around for a very long time.

These magnificent animals face threats from oil and gas exploration, noise pollution, ship strikes and plastic ingestion. It would therefore be nice to think that this female may well have lived out her natural life before reaching her final resting place on the Donegal shore.

People are advised to reporting strandings to the Irish Whale and Dolphin Group at iwdg.ie or to the Donegal branch via its Facebook page Donegal IWDG