Letterkenny man enjoyed a fine career for club and county 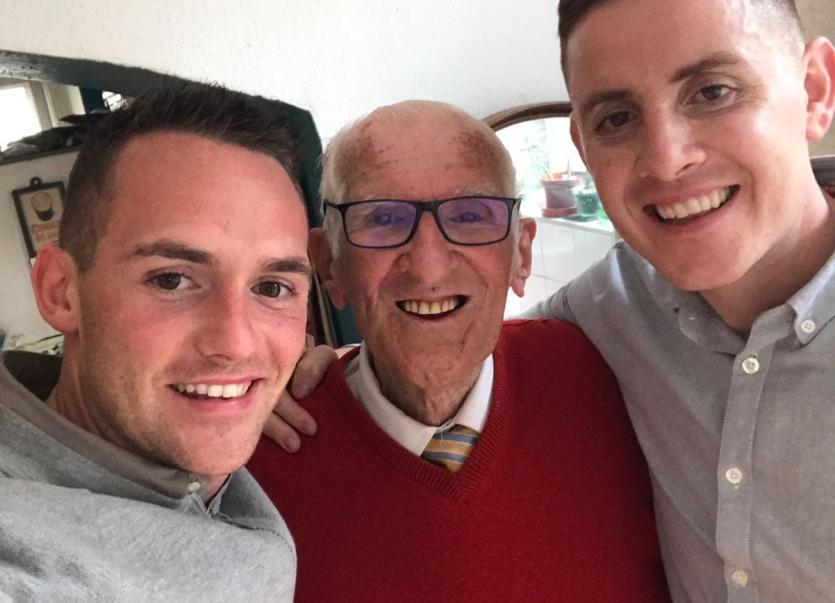 Con O'Halpin, pictured with Ciaran Greene and Dualtach Molloy when the two St Eunan's players visited Con at his home in London

The members of St. Eunan’s GAA club in Letterkenny are mourning the passing of one of their most celebrated players, Con O’Halpin, who has died in London.

Con was a member of the first ever St Eunan’s championship team back in 1948 and a member of a star-studded side that halted Gaoth Dobhair’s march for a historic first five-in-a-row of senior championships.

A man of many firsts, he was also a member of the first Donegal team to play in Croke Park in a competitive game, when he lined out in goals against Cork in the 1952 National Football League semi-final.

A former teacher at St Eunan’s College, Letterkenny, Con moved to London in the 1950s where he remained since. He continued his teaching profession in London and resided there for the rest of his years.

He always kept in touch with home and with his beloved St. Eunan’s GAA club.

Back in 2012 the club honoured their former player when they inducted him into the St. Eunan’s Hall of Fame at their annual presentation night.

The vice-chairman of St. Eunan’s GAA club, Cathal Greene, became close friends with Con in recent years and said news of Con’s death has been met with much sadness in his home town.

“Con turned 90 last November. He was a real gentleman who was so proud to have played for St. Eunan’s and for Donegal.

“He loved his time playing football, and even after he moved away, he kept up to date on all that was happening in the game here.

“I remember when he came back to Letterkenny, he wanted to go out to O’Donnell Park. I was chairman back then and myself and James and Paddy Gallagher and and Charlie Harvey took him out and showed him around.

“It was a great day, and we kept in touch ever since. We used to write to each other, and Con used to send on a few pound for the club - nothing big, just some money if we reached a county final or an occasion like that.”

Con was living in Whetstone in Barnet in North London and he passed away in the early hours of Wednesday morning.

Cathal’s son Ciaran, who is also now based in North London, recently visited Con at his London home, along with another St Eunan’s player Dualtach Molloy.

Even though Con had only a relatively short playing career here in Donegal, he achieved much success.

He also played Sigerson Cup football with UCD and was also an accomplished basketball player during his time at university in Dublin.