Round Ireland and Britain Alzheimer’s walk curtailed by coronavirus pandemic 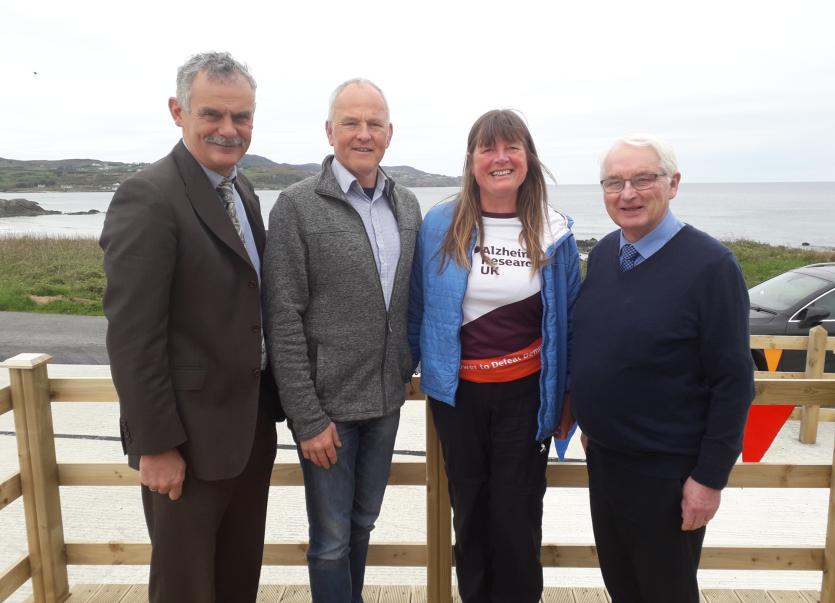 Sadly, Karen Penny who trekked the Donegal coast for a round Ireland and Britain charity walk has had to postpone her potentially record-breaking feat due to the coronavirus pandemic.

Redoubtable walker, Karen, sailed from Rathmullan to Buncrana in May last year, as part of her Alzheimer’s Research UK fundraiser, having covered 17,070 miles.

Karen announced her decision last week on Shetland, where she had arrived on March 1, with what she described as “a very heavy heart.”

The Swansea native said her decision had been prompted by the profound impact coronavirus was having in Shetland and around Britain, Ireland and the rest of the world.”

She added: “It would have taken me another two years to conclude my walk and I would have been the first woman to walk around Britain and Ireland continuously, but I cannot ignore the profound impact that the coronavirus is having, not only here in Shetland but around Britain, Ireland and the rest of the world.

“These are challenging and uncertain times for every single person, and I have to take personal responsibility for my actions and the impact those actions have on others with whom I come into contact.

“It is so essential to act compassionately for all those who are vulnerable at this time. This walk has demonstrated how kind people are and how close communities can be. People look after each other and that is what we need to do now. It is so heartwarming here in Shetland to see how the Community is rallying around to support each other.

“I spent the last 13 months walking the whole Coast of Ireland, Wales, the North West of England, the mainland Coast of Scotland from Gretna Green to Aberdeen and 30 Islands including the Outer Hebrides and Orkney and to date I have raised nearly £59,000 for Alzheimer’s Research UK,” said Karen.

When she reached Inishowen last May, Karen, who began her walk on January 14, 2019, explained her motivation for her then possibly four-year-long hike.

She said: “I am doing this walk for two reasons. I have a huge passion for walking and I am raising money and awareness for Alzheimer’s Research. Sadly Alzheimer’s has really affected our family. My husband, Mark (Faulkner) lost both of his parents, in quite quick succession to dementia and alzheimer’s.

“Mark’s father passed away with alzheimer’s, after eight years and at the end of his life, he didn’t know who he was, where he was, didn’t recognise his own son, didn’t know his name. It was very sad for all of us.

“I think the hard thing about it was, we as a family, felt very ill-equipped to deal with alzheimer’s and understand what needed to be done because we hadn’t had that experience before and making decisions as a family, trying to work out what was the best thing to do, was very, very difficult.

Karen was keen to emphasise alzheimer’s was not an “old person’s” disease.

She said: “It is young people. It is people in their 40s and 50s now who are developing alzheimer’s now. It is a disease of the brain. Your brain is like an orange and segments fall out of it and they’re linked by neurons and once the neurons are gone you never get that facility back again.

“What we are trying to do is to get as much awareness as we can for alzheimer’s, so people start talking about it and we put pressure on Government and Government funding. We want to get more money pouring into the charity, which it hasn’t had previously. So many charities benefit from Government funding and look at the huge in roads that are made.

“You have cancer research. We now have various cancers, which can be stalled a little bit and put back and some people can be cured of cancer, just because there has been the right amount of funding into it. That’s what alzheimer’s needs.

“I was recently invited into Carrick Day Care Centre. Several of the visitors there were patients who had alzheimer’s. It was absolutely refreshing to sit there and really understand now what it’s all about. So when they say, ‘I need to get a taxi. Am I going in my taxi now?’ You just need patience. You need understanding and you need that rapport with people that you care for, to look after them. I found it very humbling. This is a very humbling journey for us,” reflected Karen.

At the moment there is no cure for alzheimer’s But Karen believes there will be one day.

“When I arrived in Ireland, Míceál Delaney and his wife put me up for the night and didn’t charge me and, more importantly, taught me about hurling.

“The GAA is an amazing organisation. When I went to Mayo, I met a gentleman called Derek Davis who was a tour guide and he was all things Mayo. He gave me a lanyard with red and green on it, with a sign saying, ‘Mayo for Sam!’ In Leitrim the whole Council came out and walked the whole 5k of the coastline with me, that was incredible.

“I have been walking around Inishowen since Storm Hannah. Rathmullan Sailing Club brought me to Buncrana in a rib boat, specifically to let me get there in time to do the Buncrana Parkrun on Saturday morning. Buncrana was absolutely beautiful. I then walked up Mamore Gap and down the other side. It was stunning. On Monday, I will walk from Culdaff to Quigley’s Point and Wednesday, I will arrive in Derry in the early afternoon. I am looking forward to that because I have heard what a fabulous place it is,” said a determined Karen.

Karen was walking the Coast of Ireland and Britain for Alzheimer’s UK 2019. To follow her journey check Facebook for The Penny Rolls On; Twitter for Thepennyrollson; and Instagram for coastalwalkeraruk. Donations can also be made at www.justgiving.com/fundraising/thepennyrollson.

In an emotional conclusion, Karen asked people to stay with her saying: “I will restart this walk Your support has meant everything to me. The sun comes up and it starts again.”