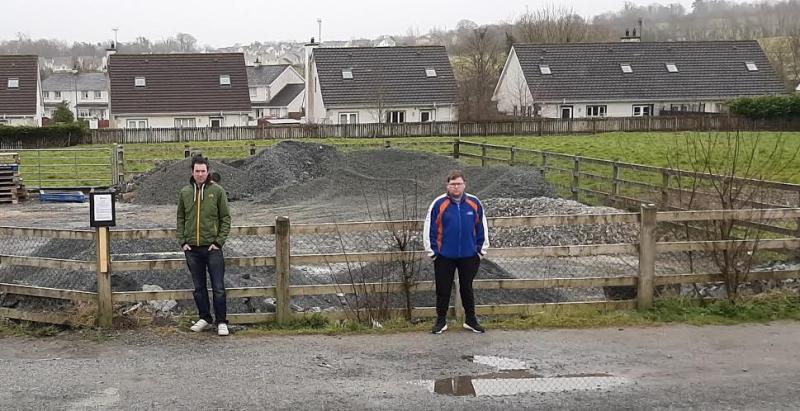 Residents living on the Trusk Road area in Ballybofey have accused Donegal County Council of trying to rush through a planned 19-unit two-storey social housing development without allowing them time to analyse the proposals as a community.

They claim that the current Covid-19 restrictions on public gatherings prevents them from meeting to discuss concerns and offer alternate ideas.

This development has been steeped in controversy since it was first mooted several years ago.

It had been the subject of a protest at council headquarters in Lifford a number of years ago but now it appears the council is keen to push the project forward. 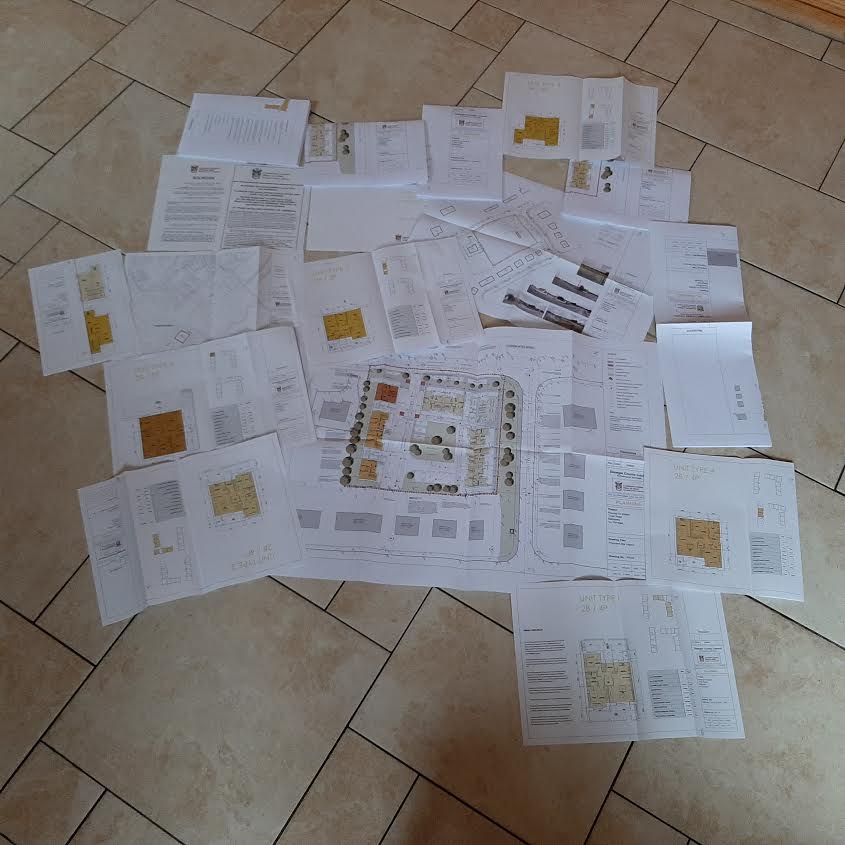 Local residents were angry when the site notice appeared at the location towards the end of last week saying they had been promised full consultations would take place before anything happened.

“We're not against the housing project, we just feel it's not the right design for this area. The council has the ability to come up with something other than a concrete block.

“There are 52 residents living in the 23 houses at The Weavers. This project would add a potential 76 more in 19 units without making allowances for basic necessities,” a spokesperson for the group said.

The spokesperson added no one was against the idea of social housing there but everyone felt proper bungalows instead of a two-storey development would be more suitable to the needs of elderly people.

“We are also very disappointed with our local councillors and indeed the council itself as we feel we have been getting the runaround since we voiced our concerns.”

Now residents are concerned that the deadline for objections or submission will pass before they can get together to offer their opinions.

“The Government, the HSE, Saolta and even the council have been telling us to refrain from holding public meetings but how do they expect us to examine up to 20 different documents and come to a general consensus at this time?
“As a community we would love to see suitable community housing for the elderly. They need a front and back door, and a garden and a scheme that enhances their quality of life.
“The plans we've seen suggest there are two and three bedroom apartments being considered and that doesn't sound like a development for the elderly.”

The actual site where the council proposes to erect the development at Trusk Road, Ballybofey with The Weavers housing development in the background

The spokesperson pointed out there are also plans for disabled parking and a bus stop but the small space provided didn't lend itself to these proposals.
“We don't even have a decent footpath serving this road. We are 100% convinced the council is using the Covid-19 crisis to slip this through. We have asked for the date for submissions to be put back from the start of June until at least September but we haven't received any reply to this to date.
“The council knows we cannot collectively gather to discuss our fears and concerns. How is the ordinary lay person to understand the complicated drawings or planning proposals being suggested without us all coming together and pooling our knowledge?”

The spokesperson added: “The people of the country are totally focused on what is the worst health crisis ever. People are afraid to meet up to talk but we feel we are entitled to a proper hearing from the council.
“We know they spent something in the region of €875,000 buying this site years ago and are keen to make up the outlay.”
It is understood residents will continue to seek an answer from the council.

“We feel disrespected, we feel we have been bullied. They have given us information but that's not enough. It's not right to disregard the Covid-19 rules in this situation. We want this postponed until the crisis has passed,” the spokesperson said.

Council say scheme will be of benefit to community

Donegal County Council argues the proposal will enhance the area and cater for the growing accommodation needs in the area.

The planning notice states it plans to construct a 19 unit two-storey development consisting of 16 two-bedroom and three-bedroom housing units.

The council explains that the development objective is to provide a high-quality,sustainable predominantly senior citizen housing scheme that will address the existing social housing needs of the Ballybofey-Stranorlar area. 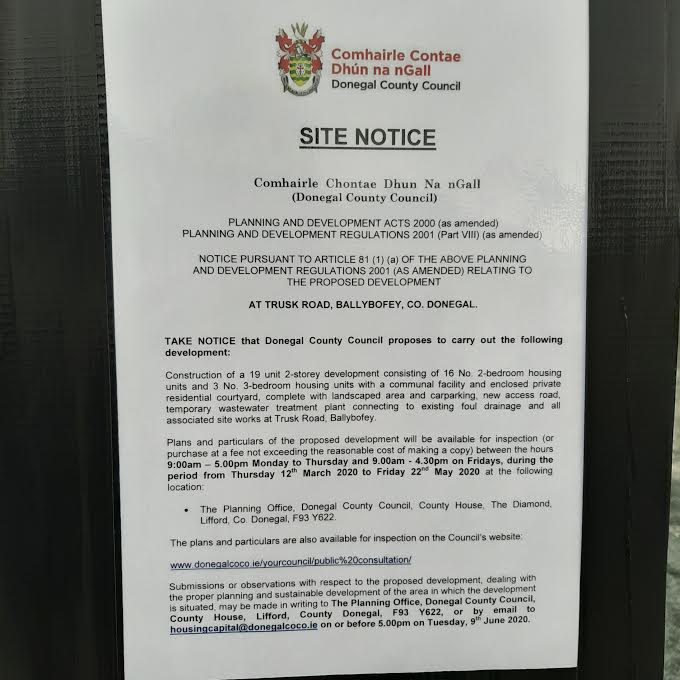 The site notice which was erected last week

It adds that given the site’s proximity to the town centre, the numerous retail, educational, recreational and healthcare facilities located close-by, the development of the site for residential use will offer an appropriate location for social housing and would contribute to the creation of a sustainable community for elderly people.

Plans can be inspected between 9am and 5pm, Monday to Thursday and 9am to 4.30pm Fridays until May 22 but submissions or observations dealing with the proper planning and sustainable development of the area in which the development is situated, may be made in writing to the council's planning office, or by e-mail before 5pm on Tuesday, June 9.

The plans and particulars are also available for inspection on the council’s website:
www.donegalcoco.ie