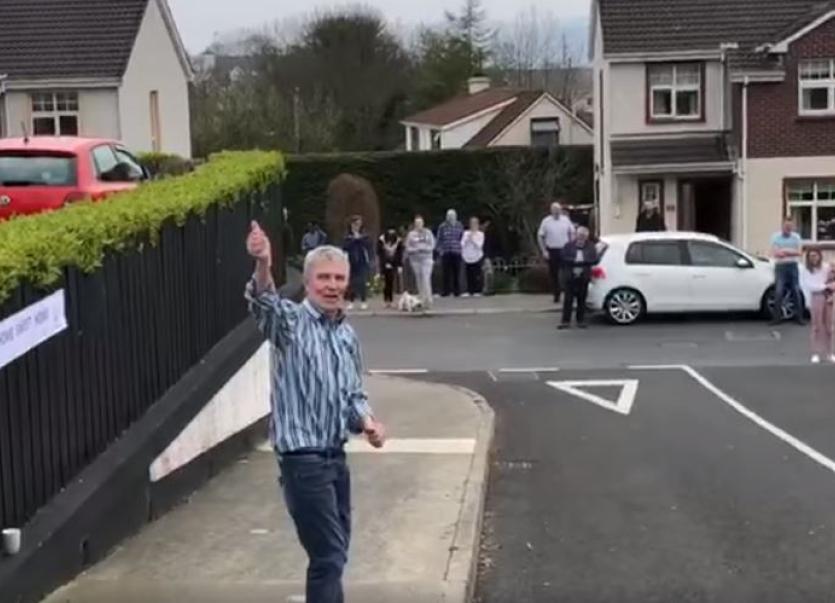 An Inishowen man was given warm welcome home after recovering from Covid-19.

Buncrana man Donal Bradley returned to his Burwood home last week to a rousing reception after spending two weeks in hospital with the deadly virus.

Family, friends and neighbours turned out to greet the popular local with loud cheers and a round of applause. The scene that was captured by Donal's daughter Danielle, has since gone viral on social media.

The 65-year-old had spent two weeks in University Hospital Galway, one of which was spent on a ventilator in the Intensive Care Unit.

Following his return home, Mr Bradley's other daughter Julie said he was “very tired” but “over the moon to be home and alive”.

“It was out of this world,” Julie explained. “It was such a great occasion when he arrived home. It was a great coming together of everybody.

“There was been so much bad news that it's nice to finally have some good news. There was a few tears in people's eyes.

“I think it also shows how much of strong and tight-knit community we have here. Everyone has been very supportive and its really given the place a boost.”

Julie told the Inish Times that there had been a “few tough days” when her father was in hospital.

“It was very tough for the family,” she said. “We couldn't see him, or talk to him and be near him. When you're in that situation its very hard.

“But the staff in Galway were fantastic. I was the point of contact for hospital staff and they explained everything to me in layman's terms, which kept us reasonably calm, especially when my father was on the ventilator.

“Those days when he was on the ventilator were tough but all we could do was try and stay positive. Thankfully my father was a healthy man before he caught Covid, which probably helped him in the end but it was very scary.

“Looking back now, it seems like those days just flew past but they were some of the longest days of our lives.”

Julie said her father is now at recuperating following his release from hospital.

“My father is very tired and sore from the tube from the ventilator but he's relieved that he's home. We're very lucky and delighted that we've had a positive outcome,” Julie added.

With the restrictions on people's movement extended until May 5, at the earliest, Julie is urging people to follow the government's guidelines and to stay at home.

“It's important that we do what we are being told. This will only last a few months and it'll pass. You could already have it and pass it to somebody else and you wouldn't want that on your conscience.”

He said: “The ventilator is the highest level of support that we will give to patients, who have difficulty breathing.

“During that time they have a tube which delivers the oxygen and the pressure into their throat, so they tend to be deeply sedated during that period.

“And while they are very sick they tend to lose a lot of muscle as part of their critical illness. When they recover they do feel quite weak.

“Julie’s description of her dad is not unexpected. It’s exactly the kind of thing you tend to see in people who survive and recover after a very severe illness like Covid-19.”