Prayer Cycle with a Difference for Donegal Rector

Archdeacon of Raphoe to cycle around south Donegal to visit parishioners 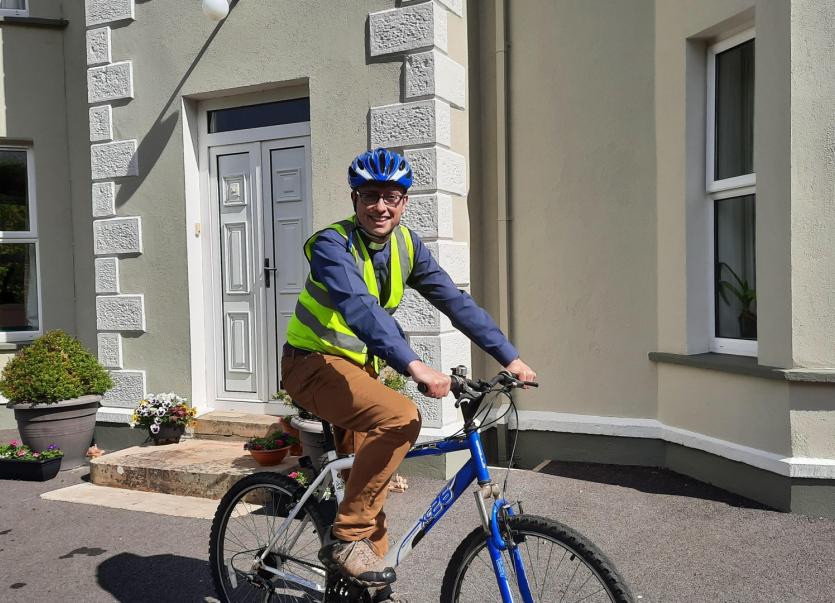 Archdeacon David Huss sets off from the Rectory on the first leg of his ‘pedal-powered parish pilgrimage’. PHOTO: Bev Huss.

The Archdeacon of Raphoe, Ven. David Huss is taking to the roads of south Donegal on a bicycle for a series of socially-distanced parish visits around the Parishes of Donegal, Killymard, Lough Eske and Laghey.

The local rector, who lives in Donegal Town, is encouraging parishioners to come to their doors and say hello – from a distance of at least two metres – as he cycles his parishes' highways and byways offering pastoral support to his flock.

“I was missing seeing people face to face,” Archdeacon Huss said, before setting off on the first leg on Wednesday – which had been designated International World Bicycle Day. “We’re now permitted to do ‘outdoor’ get-togethers, as long as we’re not in groups of more than four, so the idea came: why not do it by bike?”

The rector said his wife, Bev, who is a GP, was delighted with what they have dubbed the ‘pedal-powered parish pilgrimage’.

“Bev had a hand in the suggestion,” he said, “in fact the actual idea of going out on the bike was probably hers, so, she’s very pleased to see me breaking away from my sedentary lifestyle and getting exercise. I’ve been passed as ‘medically fit’.”

Day one took Archdeacon Huss out of Donegal Town, along the Killybegs Road to Summerhill, Edrim, Drimark, Drumstevlin and Ballydevitt.

“From next week I’ll crank it up to longer distances; there are a few hills in the parish but I’m spreading it over several days so I should be fine. I’ll be setting off each day at about 2pm,” the Rector said, “and finishing who knows when.”

Archdeacon Huss is at pains to point out that he will be observing social distancing throughout his travels.

“I hope to wave to people, stop at the gate, say hello, hopefully say a quick prayer. I won’t go into people’s houses or accept cups of tea – not until I’m permitted to do so and that won’t be for the foreseeable future.

“Physical distancing doesn’t mean spiritual distancing, though, so it’s important to keep in pastoral contact. Doing it by bike is a great way of doing it: it’s good for my health and fitness, and it may create a bit more interest.”