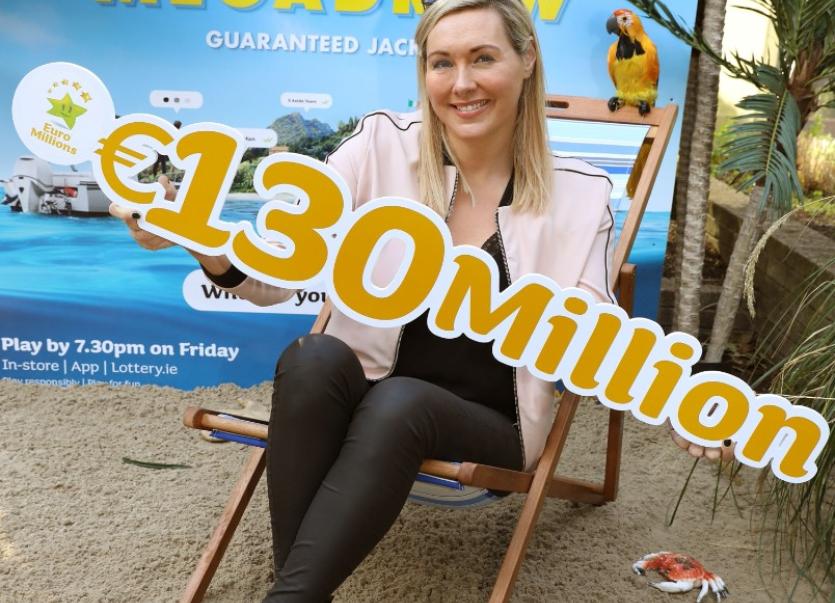 The EuroMillions jackpot is a guaranteed €130m today!

Excitement is building among EuroMillions players all over Ireland ahead of Friday’s (3rd July) extra special EuroMillions Mega Draw which has a guaranteed jackpot of a staggering €130 million.

The National Lottery has advised players dreaming of winning big in the special draw to continue to follow public health guidelines and if playing in retail, to buy their tickets early to avoid queues which will inevitably build in the hours leading up to the cut-off for ticket sales at 7.30pm on Friday evening.

So far this year, over €52 million in prizes has been won by players in Ireland in the EuroMillions game which includes a €17 million jackpot win in Castlebar, Co. Mayo and an incredible 16 separate winners of the €500,000 EuroMillions Plus top prize.

A spokesperson for the National Lottery said, “The EuroMillions community holds a special Mega Draw event a number of times a year and it always creates incredible excitement amongst our players. To win this mind-blowing amount of money is the stuff of dreams and it would bring to 16, the number of Irish EuroMillions jackpot winners since the game launched in Ireland in 2004. With the guaranteed jackpot of €130 million for Friday’s draw, we are advising our players to continue to follow the Government’s public health guidelines and avoid queues in retail by purchasing their tickets early in store or to play online at www.lottery.ie or through the National Lottery App.”

They added: “Each and every week, there are over 100,000 winners in the EuroMillions game in Ireland. Our players aren’t the only winners however. Community groups and charities throughout Ireland are also set to benefit from Friday’s special €130 million jackpot event as almost one third of National Lottery sales, including the EuroMillions game goes to Good Causes in the areas of sport, youth, health, welfare, education, arts, heritage and the Irish Language. In total, more than €5.6 billion has been raised for Good Causes since the National Lottery was established 33 years ago. In 2019 alone, €252 million was raised for local Good Causes in communities across Ireland.”

Here is the roll call of the 15 lucky Irish EuroMillions jackpot winners to date:

2. July 2008: A lucky player from Co. Tipperary won a €15 million jackpot with a ticket bought in Carrick-on-Suir in Co. Tipperary.

3. June 2009: A family syndicate shared the jackpot with a British winner, taking home over €29.4 million with a ticket they purchased in Dublin.

4. June 2013: A winning ticket sold in Beaumount, Dublin, shared a EuroMillions jackpot worth over €187 million. A Dublin player earned half of the jackpot and picked up over €93 million.

7. September 2014: An €86.7 million jackpot was won by a syndicate from Dublin. The ticket was sold in Centra, Ballybrack, Co. Dublin.

10. January 2017: A Dublin work syndicate claimed the €88.5 million EuroMillions jackpot. The winning ticket was sold at the Applegreen Service Station on the M1 Northbound in Lusk, Co. Dublin.

11. July 2017: A syndicate from the West of Ireland won a €29 million EuroMillions jackpot. The ticket was sold in Garryduff XL Store on Pound Road, Castlebar in Co. Mayo.

12. December 2017: A small family syndicate from Dublin won €38.9 million on a ticket purchased in The Village Shop in Malahide Shopping Centre

15. February 2020: A lucky Mayo family shared a €17 million jackpot prize with a ticket they purchased in Mulroy’s Londis, at the Moneen Roundabout, Castlebar, Co. Mayo.