Students and staff had to be rescued from Machaire Rabhartaigh beach in August, 2019 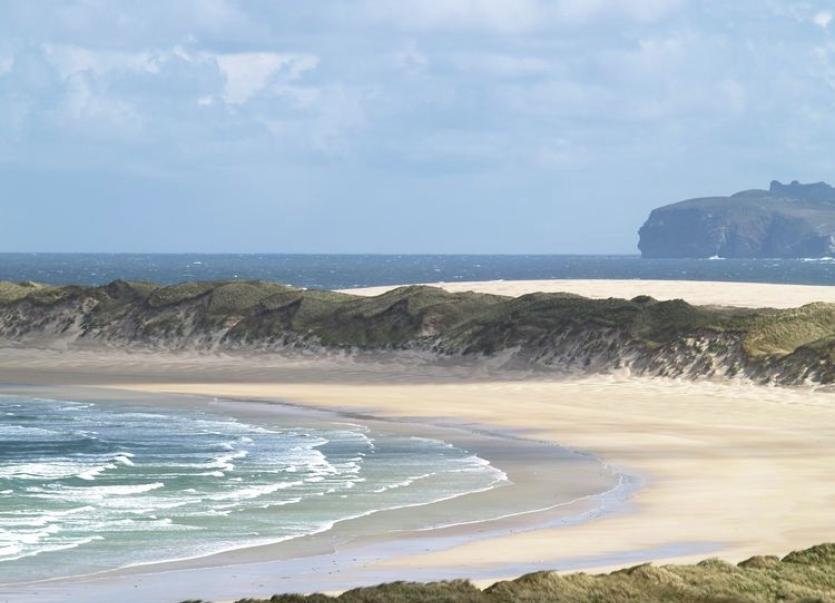 A pilot scheme for a pontoon ought to be considered for the beach in Machaire Rabhartaigh, a local councillor has suggested.
Sinn Féin Councillor John Sheamuis Ó Fearraigh made the suggestion at a meeting of the Glenties Municipal District which was held in Dungloe, on Tuesday.

Read also: Body of a woman recovered at Horn Head near Dunfanaghy

Rescue
An incident occurred at the beach last year where fifteen people including students and staff of a Coláiste Gaeilge had to rescued from the ocean in mid-August, 2019.
The students and staff were part of the Gael Linn, Irish language College.
Local fishermen and rescue services came to the aid of those who were being swept out to sea.
On scene support was also provided by the Queen of Aran and the Mulroy Coast Guard Unit.
The Irish Coastguard Helicopter, Rescue 118 airlifted 10 people to Letterkenny University Hospital for assessment.

Read also: A respected and well-known Donegal priest recounts how many people joined with him on his online spiritual journey during lockdown

Bollards
Councillor Ó Fearraigh said that the pontoon ought to be considered for the popular beach for the following year, 2021.
“I think a pontoon could be placed there for next year,” Cllr Ó Fearraigh said.
He also suggested putting bollards in the area in order to close of an area for swimmers as the sea in the area is very popular for a number of different sea sports.
He informed council officials that there had been a number of instances where people who were on jet skis came too close to people who were swimming in the area.

Read also: Concerns after arrival of dozens of campervans in Donegal
Marine
A Director of Services with Donegal County Council (DCC), Michael McGarvey, told Cllr ÓFearraigh that anything that would be placed in the water would require a foreshore licence.
He did add that he would send a communication to the marine officer, David Friel, with DCC and inform him of Councillor Ó Fearraigh’s suggestion.
Mr McGarvey also informed Cllr Ó Fearraigh that signage was used in other areas to inform people of jet skis being in the water.
He said that he would also look at the issue of illegal dumping at Machaire Rabhartaigh and take all other issues into consideration.