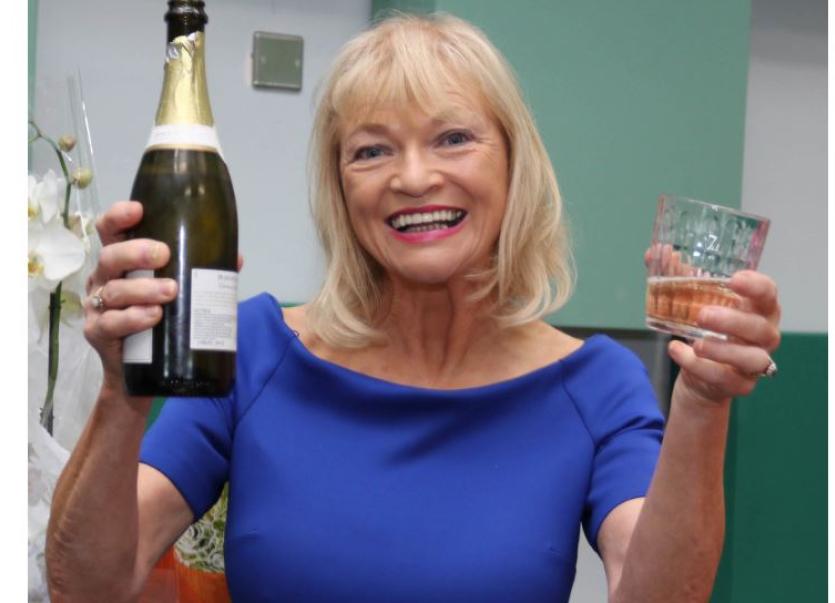 It was the end of an era for RTÉ Raidió na Gaeltachta’s Donegal service this week as Áine Ní Churráin retired from the station after forty years.

Edel Ní Chuireáin presented a special edition of Barrscéalta earlier today, with Áine as guest of honour as she looked back over her long  broadcasting career.

Áine, from An Choitín in Gaobh Dobhair, started working with Raidió na Gaeltachta in 1980.   In her first year, she interviewed then-Taoiseach Charlie Haughey, who was in Gaoth Dobhair to canvass for byelection candidate Clement Coughlan, and broadcaster Marian Finucane.   Líon Tí was the first programme she presented, a lifestyle magazine aimed mainly at women.

She joined the Barrscéalta team in 1996, and has been presenting the northwest magazine show for many years now.

Her long career in broadcasting has brought her to many parts of the country and further afield.  In 2008 she travelled to Switzerland with a contingent that included Paul Brady as part of the commemoration of the 400th anniversary of the Flight of the Earls, and she recorded a programme there.  She has also presented shows from Brussels, England, and from across the Celtic nations.

Indeed, she has often pulled out her recording equipment during  her own travels.  She made  two programmes while away in Honolulu some years ago, one about Pearl Harbor and one about the native people of Hawaii, and she also recorded a programme with a woman from Gaoth Dobhair while on holidays in San Francisco.

Interestingly, with so many years of programmes to choose from, it’s not those featuring celebrities or big stars that are to the fore in her list of favourites for Áine as she looks back on her career.

“I remember we recorded a programme in Na Cruacha, the Bluestacks, and there were just two brothers left living in the area, the McDermotts.  They were great characters, and we had a wonderful time there making the programme.  Another one that stands out was a programme on a local butcher and car dealer here in Gaoth Dobhair, Tadhg Simon, and it was so popular we had to broadcast it a few times, people were looking for it.  There was no option to listen back later then!  Some years ago, I made a programme in Scotland with a group from Arranmore Island who had worked as Tattyhokers there and had come back to where they had worked.  It was very emotional for them, and it has stayed with me, it was powerful.”

Áine has worked under four different managers in Donegal, and seven heads of Service, or Ceannairí.  She has seen huge technological advances during her years with RTÉ Raidió na Gaeltachta too.  When she started, she used to do all her recording on a Uher, a heavy, cumbersome reel to reel machine, and all editing involved physical splicing of tape, but that has all changed beyond recognition now.

And how does she feel about her retirement?

“I’ve spent such a huge part of my life working here, I can actually see the station from my bedroom window!  I’ll miss it terribly.  The radio has given me wonderful opportunities, I’ve learned so much, and worked with great colleagues, many of whom have become great friends, and sadly some of whom have since passed on.”

In her retirement, it’s unlikely that she will be short of things to do.  Áine has a lot of  interests outside of broadcasting.  She is an artist and a photographer, and enjoys walking and hiking.  She has also graced the stage many times with Aisteoirí Ghaoth Dobhair, and was heavily involved in the work to reopen the Amharclann Ghaoth Dobhair theatre in 2017.   Áine is married to Damien McKeever, and they have four adult children, and one grandchild.

Áine is looking forward to having more time to devote to her many interests and to her work with Amharclann Ghaoth Dobhair.  Two of her children are currently living in New Zealand and she hopes to be able to make a trip down under in the near future too.