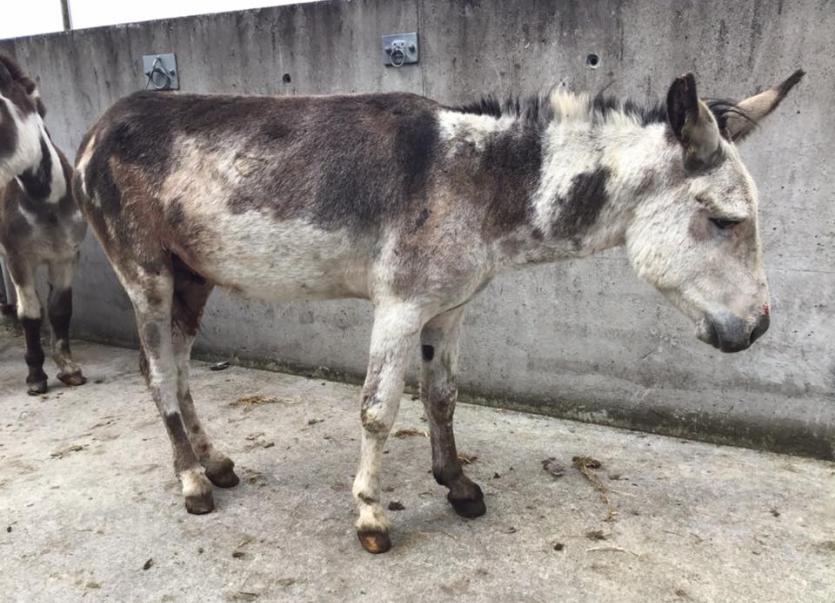 Eight donkeys described as being in ‘a truly terrible state’ have been taken in by Donegal Donkey Sanctuary.

All eight were welcomed to the sanctuary in recent days and the owners are doing everything they can to relieve the animals’ suffering.

The sanctuary owners said on social media: “The hooves on one little man are just beyond belief. The pain and discomfort that he is feeling as he attempts to move around are just horrific. His head is low and his eyes are empty.

“All are terribly thin and covered in cuts and sores especially on their noses and faces. They have sore eyes and painful feet. Just shocking.

“One in particular is absolutely paralysed by fear. He will not meet our eyes.

“When will it ever end?”

The donkey with the overgrown hooves has been named Bertie. A huge amount of growth has now been removed.

According to the sanctuary: “Sadly it is not just a case of going back to normal for a donkey that has been allowed to get into such a state. He is lying down a lot and really doesn't want to interact with us much yet.

“We had initially placed him in a stable by himself in order to rest and have peace but he fretted for his companions and couldn't settle so we have put one of the others, called Jake, with him and that seemed to help. Hopefully he should begin to feel better over the next few days.”

The donkey which was described as being paralysed by fear has been named Ernie.

In an update, Donegal Donkey Sanctuary owners said: “Ernie is still the one who is causing most concern. He is unable to relax his guard to eat and is just picking at his food. He is still terrified and is relying on the other donkeys for comfort and security. We are unable to get too close without terrifying him.

“This photograph depicts just some of the severe puncture wounds that are all over his body. The blue marking is an antiseptic spray to aid healing and prevent infection. Ernie is a large donkey and it is heartbreaking watching him trying to make himself smaller and out of sight.”