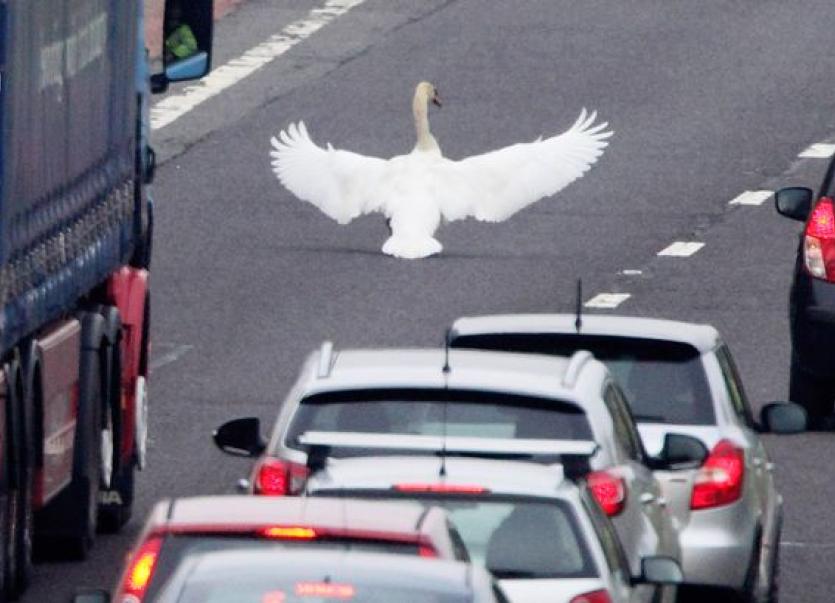 Could this be a possible future scene on Donegal's proposed new road?

Wild swans on the road between Lifford and Raphoe and boreholes in farmers' fields on the outskirts of Letterkenny could prove something of a stumbling block for the two of the three proposed multi-million road projects currently being developed here in Donegal.

These new factors emerged at last Monday's meeting of Donegal County Council in Letterkenny when councillors were asked to review changes to the text, policies and objectives of the current County Development Plan.

These were needed so that it co-existed with the preferred routes of the Trans-European Trasnsport Network (TEN-T) project, namely the N15/N13 Ballybofey-Stranorlar bypass; the N56/N13 Letterkenny to Manorcunningham and the N14 Manorcunningham-Lifford/Strabane/A5 links.

During a presentation by director of community development and planning services, Liam Ward regarding the proposed variation two councillors, Donal Coyle and Frank McBrearty Jnr raised concerns that could have implications for the future of the project.

Mr Ward reminded councillors they had already held a workshop in relation to these variations to progress the process through to vary the County Development Plan.

He added he now wanted them to note the wording of the proposed variation to the County Development Plan as well as approvals to start a Strategic Environmental Assessment (SEA), an Environmental Report, a Natura Impact Report and a Strategic Flood Risk Assessment Report.

He also said the council wanted their permission to hold a special meeting of the council on Monday, September 7 at 11am to approve the publication of the draft TEN-T variation documents for public consultation.

These were agreed by councillors on the proposal of Cllr Gerry McMonagle and Cllr Donal Coyle.

Cllr Coyle asked if work could be carried out outside the identified route corridor. He revealed it had been brought to his attention that ground investigations were being carried out at the moment outside Letterkenny and from what he could see there did not appear to be any particular reason for them.

He added he also wanted to know if there was any plan to connect the existing Convoy road with a new road to the roundabout at the top of Lurgybrack.

"Is that in this report because if it is it's not shown on any map. I refer in particular to these link or service roads as they are called. There seem to be changes made that are not showing on any specific map. The people who are going to be affected are asking questions, particularly about the boreholes.

Cllr Coyle said he also wanted clarification about the next public consultation and how it was going to be run.

"Does it mean it will be the same as the last consultation where a map was put up in the Public Service Centre where people had to go in and try to guess where the actual road is going to be. Will there be anybody there from the council team  to go through the proceedings and will the councillors see submission before they are dealt with?"

His concerns were supported by Cllr Liam Blaney who said they needed an explanation.

Cllr Frank McBrearty Jnr said there were difficulties right through this project. and he had a "serious problem" supporting a section on the Lifford route.
He claimed part of the original route had been changed because of the presumption of swans breeding in a certain area.

He added there was no proof of this, or at least none delivered as far as he was aware.

"Why would you change from the first route, a perfectly good route which was ready for years to go, because of swans, it doesn't make sense. I grew up in that area and I've never seen swans there in my life. Some swans do land on it but they don't hibernate there. There are thousands of swans down the road in Porthall. Farmers there are compensated for the swans being on their land. This does not happen in the area I am talking about," he said.

"Someone needs to answer the question why the route was changed. Who took that decision. People were happy with the original route. I need to get answers and a report that proves this is a designated swan area," he said.

Cllr Gerry Crawford asked if the route where the swans were alleged to be was changed.

Mr McLaughlin said it was.

Cllr McBrearty said there were other problems with the routes selected in Ballybofey and Stranorlar.

"People are not happy, will they be properly compensated?

He also raised the question that if the council knew this project was 'coming down the road' why were planning permissions granted to build houses along these routes.

"These people are now facing compulsory purchase orders, that doesn't make sense to me and that needs to be answered," he said.

He suggested they needed to bring in an independent element to look at this overall project.

Cllr Gerry McMonagle said he could understand the various concerns raised and perhaps it was time to bring someone in who was responsible for the TEN-T project to answer specific questions.

"When you give out a map but are left with more questions than answers we are leaving ourselves open," he said.

The council's director of roads and transportation, John McLaughlin said two different processes were being talked about, one was the design of the route that had been ongoing for some years but the discussion that was to start the variation of the County Development Plan so it matched up with the routes.

In relation to boreholes Mr McLaughlin said landowners knew these were being done and they were compensated for entering their fields as there was a budget of about quarter of a million set aside for this. If there were specific locations councillors could point to he would investigate but did concede there might be some delays involving landowners due to Covid-19 situation.

He added there could be changes made within corridors to meet peoples' needs if necessary and would be interested to hear from councillors if they had strayed outside them.

He added there were no plans to go out the Convoy road.

Mr McLaughlin said in relation to the swans in the Tullyrap and Feddyglass areas of Raphoe if better information came to them they would work with that. He added he would get this double checked in relation to both townlands and write to both councillors.

He said they also could have National Roads Design Office staff work with any members or hold a workshop to re-brief councillors at any time.

He also pointed out that in general landowners were "quite well compensated" for major road projects and there was a process they could go through for arbitration if negotiations did not reach a conclusion.