One-off Harps jersey up for grabs in fundraising raffle 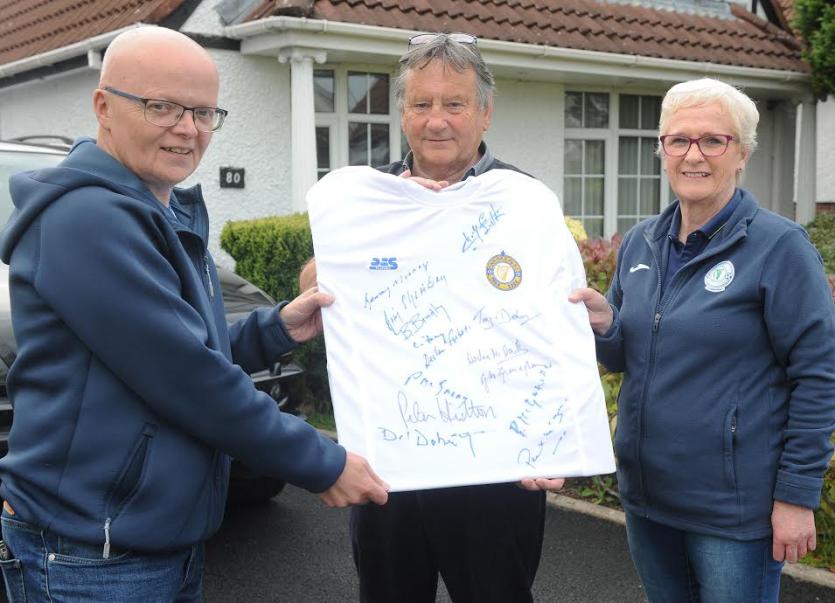 Finn Harps fans are being given the chance to own a one-off replica 1974 FAI Cup winning jersey signed by all the players that took part in the game on that memorable day.
This is the first time that a jersey will be available with all the players names on it. One had been missing up to now.
This shirt was originally released back in 2004 to mark the 3-1 win over St Patrick’s Athletic that remains the club’s only winning of the blue riband competition.
The match holds many fond memories for the die-hard supporters as Harps had only entered the League of Ireland in 1969 and in their fifth season had won the FAI Cup. The Balybofey club celebrated its 50th year in the League of Ireland last year.
Supporters can still recall the late double from Brendan Bradley after Charlie Ferry netted an early free kick that saw him hold the unique distinction of having scored in every round of the competition. He netted after only three minutes as he cracked a superb free-kick past St Pat’s goalkeeper, Tom Lally.
The side wrapped the game up when Jim ‘Chang’ Smith’s cross was headed in by Brendan Bradley for the lead while the same player added a second - all in the final eleven minutes.
It was also the first FAI Cup final to be broadcast in colour by RTE.
But now what of this unique jersey.
Well it's the brainchild of die hard supporters, Ann Kelly who co-operates the club shop and local photographer, Gerard McHugh.
When the 2004 replica came out they both bought one and got them signed as a special souvenir. Ann went one better and bought a second jersey, got it signed and stored it away.
It remained packed away until Finn Harps embarked on its recent fundraising campaign to raise €35,000 to 'bring football back' to Finn Park. This was established to raise badly needed cash for redevelopment works needed to accommodate new Covid-19 facilities at the ground.
Ann and Gerard put their heads together and realized the third jersey would be a collectors item - and even more so if they could get one more name on it - Jim'Chang' Smith.
He was unable to attend the 2004 function and as a result Ann's jersey inscriptions were incomplete.
When the call for fundraising ideas came about the intrepid duo decided what better prize for any loyal Harps supporter than a full signed jersey so off to Derry went Ann and Gerard, met Mr Smith who duly obliged by singing the jersey and now it's over to the public.
The jersey is a real one-off as sadly one of the team, Paddy McGrory has sincepassed away so this collector's item will really be one of a kind!
Tickets will be on sale throughout the county at selected outlets, at the Harps club shop and online.
The Finn Harps GoFundMe campaign also remains open until the Shelbourne gameon August 4 but it is hoped sales of this jersey will bring in a cash boost at thischallenging time.
So go get your €10 ticket or three for €20 to have a real chance of this unique prize while helping Harps along the way.