Heartfelt tributes paid to Ita Ward upon her retirement 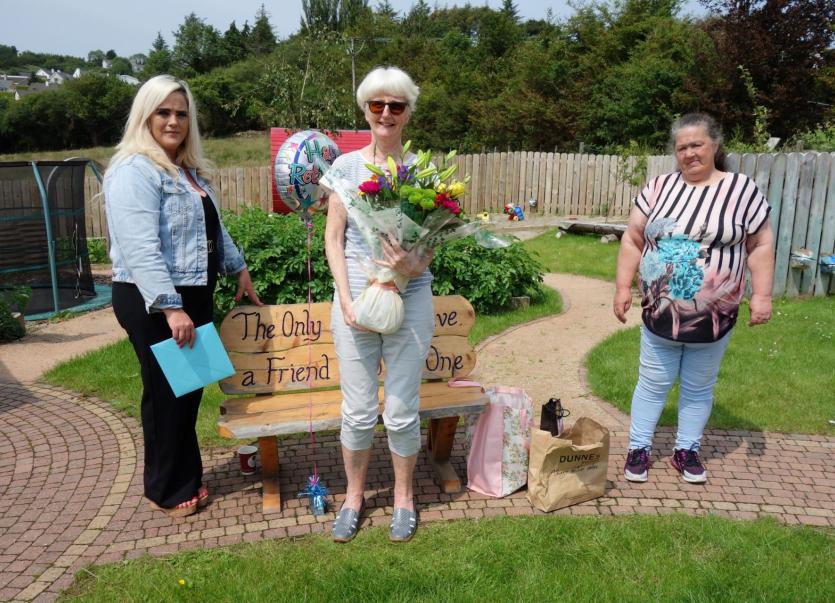 For years Ita Ward has been listening for the distinctive ring of her work phone and checking her messages even late at night – particularly at the start of the Covid-19 pandemic.
Recently she heard loud and clear just how much this level of care and commitment has meant to those she has served in her position as HSE Public Health Nurse for Traveller Health in Donegal.
Travellers of all ages and from everywhere in the county paid heartfelt tribute to Ita at a socially-distanced party organised by Donegal Travellers Project (DTP) to mark her recent retirement.
“Anytime someone in the family was sick I’d say, ‘Get Nurse Ward and she’ll be in touch with you,’” said Annie Mongan, DTP Community Health Worker.
“We’ll miss you badly…not just my family, all the families. They say they hope the next person is like Nurse Ward, but I don’t think that ever will be. You were always there for the Travellers.” 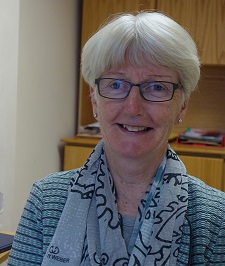 Ita Ward, who has recently retired from her role as HSE Public Health Nurse for Traveller Health in Donegal

“Travellers in South Donegal relied on you a lot for support,” said Rose Ward, DTP Project Worker for South Donegal.
“There’s a big trust, and there was never a delay once any supports were needed. One person asked me specially to tell you thank you very, very much for everything you’ve done.”
“You didn’t rush things,” said Martin Mongan, Involve Youth Worker at DTP. “You took the time and interest to get it done correctly.”
“Older Travellers will miss you terribly,” said Patrick McGinley, DTP Community Health Worker.
“When they’d phone you, you were always there. They could ask you anything and you always had the answers to deliver back.”
HSE Public Health Nurses for Traveller Health are in place throughout the country in response to the significantly higher levels of serious health conditions and much lower life expectancies experienced by Travellers.
The role involves providing health care to the community as well as delivering health promotion and preventative services in partnership with Traveller Community Health Workers.
“Old age for Travellers starts at 60 because of health inequalities that lead to higher rates of conditions like heart disease, COPD, asthma, and diabetes,” said Ann Friel, DTP Primary Health Care Team Leader.

Ita Ward in her role as a Concern Worldwide staff member, shown in Liberia in 1991 with a young girl who had a history of undernutrition on the day she was discharged from the Concern Nutrition Centre

“Ita’s commitment to achieving better health outcomes for Travellers, along with her strong values to bring about social justice and equality, have been shown over the years.
“On many occasions she has gone beyond her job description to support the Traveller community living in Donegal.”
A focus on serving communities most in need of support has been a hallmark from the start for Ita, a Downings native who grew up in Dundalk.

Preschool teacher
Her first position out of secondary school was also with Travellers, working as a preschool teacher for youngsters living at Labre Park in Ballyfermot, the oldest halting site in Ireland and former home to newly-appointed Senator Eileen Flynn.
She then followed up training as a public health nurse at University College Dublin and as a midwife at Forth Valley College in Scotland with years of international service in famine-struck and war-torn areas as a staff member of Concern Worldwide.
“I started out in Ethiopia in 1985 during the famine there, addressing the needs of malnourished children and their families,” Ita said. “The work was very intense. Towards the end of my first year the country had a good harvest, but Concern decided to stay because there was a lot of poverty.
“I was a team leader, taking part in projects to develop agriculture and the road network, and also advancing primary health care with the local Ministry of Health, including strategies to keep children healthy and to promote immunisations and good midwifery practices.”
Assignments in Sudan, Liberia, Burundi, and Rwanda followed.
Despite the terrible plights of the people she was assisting, Ita said, there were some bright spots to her work with Concern.
“It was a great experience in a lot of ways,” she said. “Who gets to climb Mount Kilimanjaro? Who gets to go on safari? Who gets to see gorillas in Rwanda? You’d never get those opportunities otherwise.”
In 1992 Ita began public health nursing in Ireland, starting at Fatima Mansions in Dublin’s South Inner City. In 2000 she returned to Donegal and took up a position serving the Ballybofey/Stranorlar area.
“It was perchance I decided 20 years ago to come back to Donegal,” said Ita, a Ballybofey resident and active member of the Ballybofey and Stranorlar Golf Club. “Then my parents and sister came back too!”

Public Health Nurse
In 2005 she took up her role as HSE Public Health Nurse for Traveller Health in Donegal, a position she held longer than any other.
“It’s not a coincidence that this is the only job I’ve ever had for more than four or five years,” Ita said in response to the tributes paid to her at the retirement party.
“The favourite parts of my job have been my visits to Traveller families and my work with Donegal Travellers Project. In other jobs I felt it was fine to move on, but in this job I feel I have learned more than anything I have imparted. Every day I’ve been learning…stories about Travellers, Traveller traditions and history, what it’s like for families to engage with the health service, and how we can help the health service meet the needs of Travellers.”
Ita has now handed in her work phone but said it would take some time to get over missing her work and her colleagues, particularly those at DTP. “I would have worked closer with the Travellers than with any other group,” she said.
As for the future, at the moment she has only a few definite plans.
“You prepare a certain amount for retirement and then it happens,” Ita said.
“It’s lovely to have more time to spend with family and friends and golf. I’m a keen golfer and need to work on my handicap! I have time to figure the rest out. I have loads of interests, but I’m going to do nothing for July and August.
“No alarm clock…except for golf dates!”