JOHN HUME FUNERAL: "Even in the darkest moments, John Hume made peace visible for others." 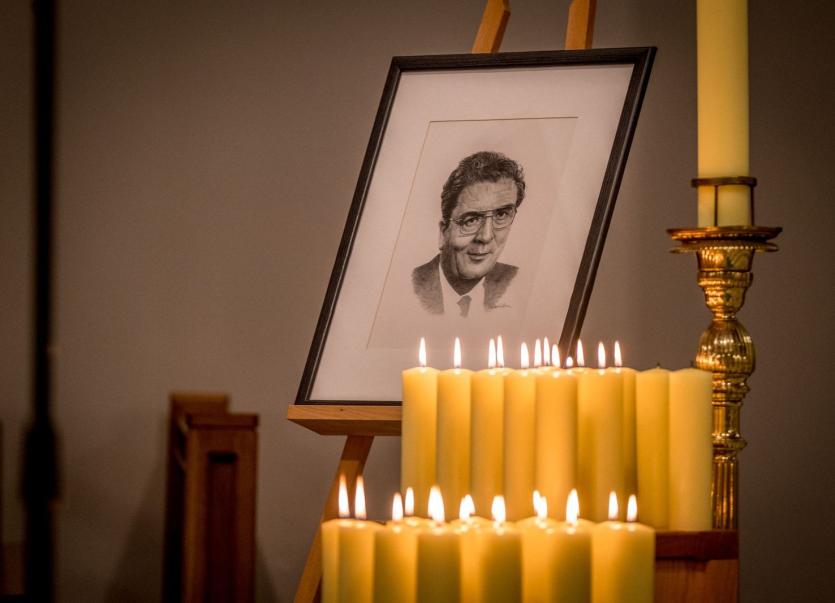 A priest today said that even in the darkest moments, when people would have been forgiven for having no hope, John Hume made peace visible for others.

Father Paul Farren was speaking at the funeral of the former SDLP leader who died on Monday at the age of 83.

Due to the coronavirus pandemic restrictions, only a small number of people were allowed in to St Eugene's Cathedral in Derry for the service.

Along with Mr Hume's family, there were a number of dignatories, including Taoiseach Micheál Martin and President Michael D Higgins.

A crowd of people gathered outside the church in honour of Mr Hume.

Messages of sympathy were read at the beginning of the service by Bishop of Derry, Donal McKeown, on behalf of Pope Francis, the Dalai Lama and former US President Bill Clinton.

In his homily during today's service, Father Farren priased the work of Mr Hume, regarded as the key architect of the Northern Ireland peace process.

“If ever you want to see a man who gave his life for his country, and his health, that man is John Hume.

“The world knows it.

“He is the only person in the world to have received the Noble Peace Prize, The Gandhi Peace Prize and the Martin Luther King Peace Prize.  Pope Benedict XVI made him a Knight Commander of the Papal Order of Saint Gregory the Great.”

Father Farren said that in the midst of all his international acclaim, Mr Hume was a proud Derry man first and foremost.

“His commitment to Derry was second to none,” he said.

“His aim was to bring life and prosperity to this city – to lift people out of poverty and he did everything possible to make that a reality.

“He always said his proudest achievement was the establishment of the Credit Union.

“But my fondest memories of John weren’t directly around his incredible achievements there were here in this Cathedral.

“In his retirement and as his health declined every day possible John came to Mass and every evening, and this is my fondest memory, he came over here and sat at the back and prayed quietly.

“In all the houses he was in White houses and houses of parliaments and many others it was in this house, the house of God, that he found greatest peace.

“It was in this house that John recognised the presence of God and his need for God – for his mercy – for his love.  Here before his God the humility of John was plain to be seen.”

At the end of the service, Mr Hume's remains were taken from St Eugene's as Phil Coulter played The Town I Loved So Well, the former SDLP leader's favourite song.