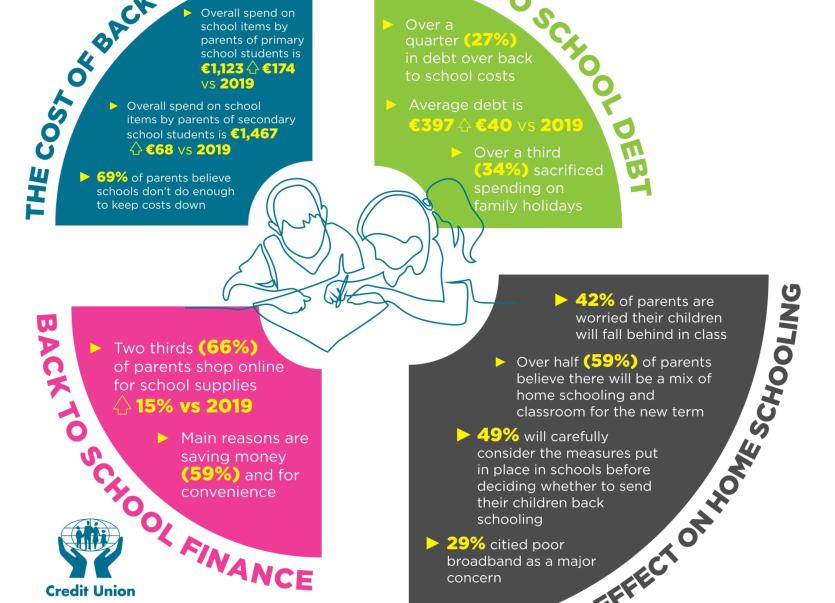 Nearly two thirds (57%) of parents in Connacht/Ulster - including Donegal - find covering the cost of back to school a financial burden while 30% are likely to get into debt in order to cover the costs of back to school for their children.

This is higher compared to the national finding of 27%. Of those who will go into debt, over a third (34%) said they will incur debt of over €500, higher than the national figure of just over a quarter.

Connacht/Ulster parents are the biggest spenders in the country when it comes to school trips and extra-curricular activities for both their primary school and secondary school children.

Among secondary school parents, 32% spend on average of €100-€150 on school trips while 29% spend the same amount on extra-curricular activities.

The findings were revealed in the annual Republic of Ireland school-costs survey commissioned by the Irish League of Credit Unions (ILCU) and carried out by i-Reach Insights in June 2020 when 948 parents of school going children were surveyed.

When it comes to methods of payment 75% of Connacht/Ulster parents use their general monthly income to pay for back to school supplies (70% national average), with 25% drawing on their savings, lower than the national average of 34%.

The use of credit cards at 20% is in line with the national average with 9% taking a credit union loan, the highest of any group of parents in the country.

More parents use the back to school allowance (21%) in Connacht/Ulster compared with the national average of 14%. Interestingly no parents reported taking a bank loan while 4% said they would turn to a moneylender.

64% of Connacht/Ulster parents said they shop online for back to school supplies as they find it more convenient (71%) get better deals (69%) while 55% said they do it to save money.

The ILCU survey also highlighted concerns of parents brought about by the Covid-19 pandemic.

Nearly a quarter (24%) of parents in Connacht/Ulster reported that there has been a reduction in their household income as a result of Covid-19, higher than the national average of 22%.

A fifth of parents (21%) are finding the extra cost of feeding their children when home-schooling to have had the biggest effect on household finances.

43% are struggling with balancing work commitments with home schooling.

When it comes to children going back to school, 56% of Connacht/Ulster parents believe there will be a mix of home schooling and classroom for the new term while nearly half (49%) said that they would carefully consider the measures put in place in schools before deciding whether to send their children back to school. These figures are in line with the national findings.

44% of Connacht/Ulster parents are worried about their child’s mental health for the upcoming term if children do not return to school in a full-time classroom setting with a further 41% concerned about their children catching up on missed teaching.

45% are already concerned that their children have fallen behind in class as a result of home-schooling during the lockdown.

Since the beginning of the Covid-19 lockdown, 39% of Connacht/Ulster parents feel their children are spending too much time watching TV or on mobile devices (35%) as a result of being home-schooled. These figures are slightly higher than the national average.

If schools do not reopen or only partially reopen, 41% of Connacht/Ulster parents stated that they are lacking resources for proper home schooling.

These include technology, such as laptops (38%), printing (29%) with 41% citing poor broadband coverage as a major concern in delivering effective home schooling.

Commenting on this year’s findings, Paul Bailey, ILCU head of communications said: “Of concern from the survey results is the amount of debt that parents are getting into to cover back to school costs with an average debt increase of €40 compared to last year.

"While the majority of parents fund back to school purchases from their general household income, the use of credit cards has increased from last year. I would encourage these parents to explore cheaper forms of finance such as a credit union loan as 9% of parents in Connacht/Ulster are already doing.

"The overall spend is up again this year for both primary and secondary school and it is clear that parents continually have to make sacrifices to cover costs. We have seen a staggering 71% increase, from €117 to €200, in the cost of after school care for primary school children while so called ‘voluntary’ contributions have increased by 25% to an average of €120 per child.

"It remains to be seen if schools will reopen fully in September and this brings a number of challenges for parents in trying to manage home schooling and to balance work and child care commitments.

"Our survey shows a substantial number of parents are concerned that they don’t have the necessary resources for home schooling, including adequate broadband, in the event of schools remaining fully or partially closed. I would encourage any parent concerned about the costs of home schooling or back to school costs to contact their local credit union to see how they can help,” he said.