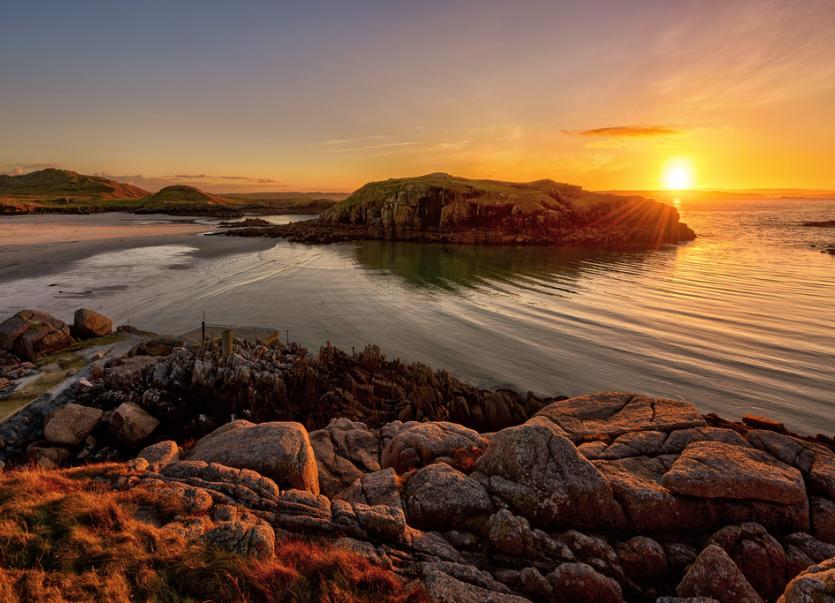 Oileán na Marbh or Island of the Dead falls into two categories.

The very name conjures up images of something out of a horror movie and while that might have been the case in the past, these days it has gone the full circle and Oileán na Marbh is now a shining beacon for hope and transparency.

This oileán is in fact a small rocky outcrop not far from Annagry at Carrickfin where an estimated 500 stillborn babies banned from consecrated ground by the church for centuries are buried.

Sadly the annual pilgrimage to the island, which was due to take place this coming Sunday, August 16, has been postponed due to the restrictions placed upon gatherings by the Covid-19 pandemic.

Dozens of people from this corner of west Donegal and indeed beyond were expected to cross the sand at low tide to gather on this rocky resting place where they would not only reflect on those interred on the island between the Great Famine and 1912 when the new graveyard in Annagry opened, but the immeasurable suffering of their parents in a dark period in our history.

But in this era of darkness a light did shine 11 years ago when in September 2009, the locals decided to have the island blessed and to erect a commemorative stone to recognise the children buried there.
Indeed it's not unusual to see people crossing to the small island right throughout the year to pay their respects and remember those who were so cruelly ignored by society at that time.

Among the people behind the idea to restore the island to its rightful place were 75-year-old Annagry man Séamus Peter Boyle and former schoolteacher, Margaret Boyd from Carrickfinn.

They along with a few others managed to have a plaque erected in honour of the island dead. This was refreshed and updated two years ago.

They had all watched the mothers and fathers on the beaches and the pier over the years, some going to the island alone and “we knew but it was never really spoken about,” said Seamus Peter.
It was also a place where sailors are buried.

Seamus Peter believes there are up to four there including one reputed to have been nearly eight foot tall!

“It was always thought that something should be done because after our generation, nobody would know anything about it. It would all be forgotten,” he said.

“It is an uplifting occasion now. I wanted people to know about this place before it was lost to the next generation.”
Mr Boyle had first heard about babies being buried on the island more than 50 years ago whilst out fishing with his uncle.

“I always knew what was on the island, my people were very open about it. I well remember going with my uncle when I was eight or nine years old and he was fishing off the rocks behind the island and afterwards he would get down on one knee and say a prayer.

“When I asked him what he was doing he told me it was for all the stillborn babies and babies who weren’t baptised.

“Well, that stayed with me and I grew up hearing different stories so it is a good thing for the whole community that we can talk about it openly now.

“One that stood out was about a man coming across the strand from Ranafast in the middle of the night with a spade to bury his dead twins in a wee box,” he said.

Inscribed on the memorial stone erected by the community are the words: ‘In memory of the stillborn babies, Famine children and sailors buried here in Oileán na Marbh (Isle of the Dead) up until the early 1900s. Erected and dedicated by the community. Is e an Tiarna m’aoire.’

There is now more sensitivity in how we deal with death generally, added Seamus. It was a taboo for a long time but now people are more open about it.

“This was so important for our community to remember those on the island and to pass our knowledge on. It is part of our heritage and it is a good thing that it is not forgotten.

“Now, there is a memorial cross and a commemorative stone to show that they will never be forgotten,” he said.

Seamus Peter added while the official ceremony was cancelled, he would not be at all surprised if local people still made the trip on Sunday.“The service has continued every year but with Covid we've had to cancel this Sunday. We will be back next year because it's important people remember,” he said.

The Oileán na Marbh story has also been committed to song. Raphoe singer-songwriter, Dean Maywood recorded his tribute to the young souls in a moving and evocative song back in 2018.
Hot Press magazine described the song as “…an absorbing listen” and “…a heart breaking, hushed hymn, full of passion and pathos”.

Those few words not only beautifully describe Oileán Na Marbh but could easily be used as an all-encompassing summary of Maywood’s music.