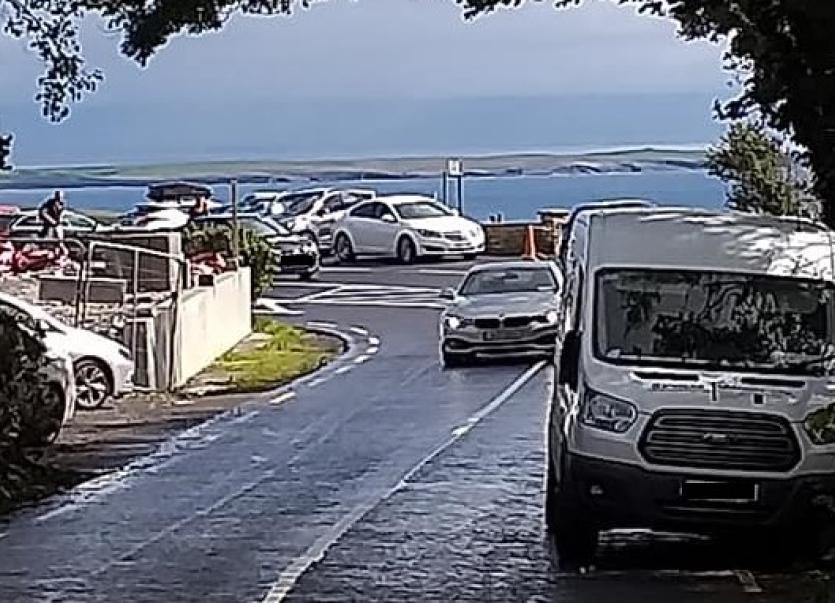 Dangerous parking on the main road near the secret waterfall. Photo courtesy of Christina Fallon Cunningham

There are fears that dangerous parking on the main Killybegs to Kilcar road by visitors to Largy’s secret waterfall could lead to someone being killed.

‘An accident waiting to happen’ is what is being repeated over and over in relation to the situation.

And with more and more people coming to see the picturesque waterfall for themselves, local people are gravely concerned that a fatal accident will occur.

Local woman Christina Fallon Cunningham is among those who is worried about the growing number of people parking dangerously on the busy main road. She captured this photograph showing a van parked on a dangerous bend, meaning that vehicles had to pull out around it on a blind corner. Parking of this type is a regular occurrence and the danger is increased by pedestrians making their way to the waterfall.

“It is mental down there,” she said. “Something serious is going to happen before it is all over.”

The photographs were recently shared by Killybegs Online and the reaction showed the depth of feeling being experienced locally.

The area known as the Ring Of Largy has a viewing point and car park and has always been a popular stop off point on the Wild Atlantic Way. But the car park was not designed to deal with so many vehicles and the road is much too dangerous for roadside parking.

The stunning ‘secret’ waterfall at Largy between Killybegs and Sliabh Liag came to attention via social media. Over the last few months an ever-increasing number of people from all over the country have been seeking it out to photograph the beautiful waterfall or simply to enjoy the sanctuary of this unique feature below the cliffs.

As well as the parking concerns, there are worries about pedestrians on the dangerous main road where there are no footpaths and no hard shoulder.

There is also the very serious risk of being cut off by the tide at the waterfall itself, and about the risk of injury on slippery rocks.

Locally, there is certainly a sense of impending doom, with a strong feeling that something needs to be done sooner rather than later.