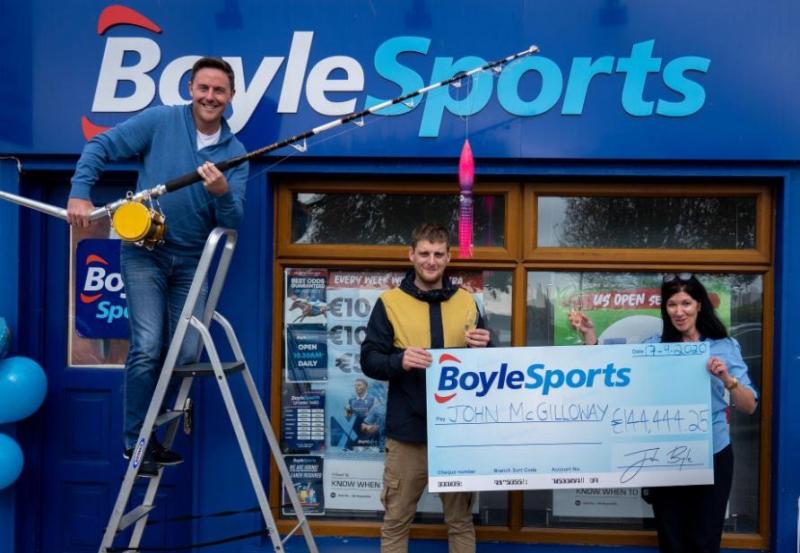 A Donegal fisherman has made the catch of his life after a sensational run on the horses made it a week he will never forget.

Killybegs man John (Pio) McGilloway started on the road to riches when he entered his local BoyleSports shop on Tuesday to strike a €0.50 each-way Lucky 15 on four relative outsiders in consecutive races in the afternoon meeting at Redcar costing him a total stake of €15.

Two 22/1 shots got the ball rolling when Freak Out and Cruyff Turn won the 1.45 and 2.20 respectively, before Artistic Rifles overcame odds of 28/1 to land the 2.50 by the narrow margin of a nose.

There wasn’t much time to settle the nerves before 16/1 pick Twist Of Hay, who was gambled into 11/1 before the off, held on to make it an incredible four-in-a-row in the 3.20.

The sensational winning run lasted for just under two hours and transformed the total stake of €15 into a jaw-dropping total of €144,444.25.

Collecting the mammoth cheque from BoyleSports today (Thursday), the lucky winner said: “I must thank all the staff at the BoyleSports shop in Killybegs. I’m over the moon and so glad to be picking up such an amazing amount of money, especially when it only took a modest stake.”

Leon Blanche, head of communications for BoyleSports added: “We have to hand it to John for reeling in four big ones in a row and turning his stake into such an eye-catching sum. It’s nice to see one of our regular customers rewarded so handsomely and we wish him the best of luck with his total winnings of €144,444.25 from a total stake of €15.”