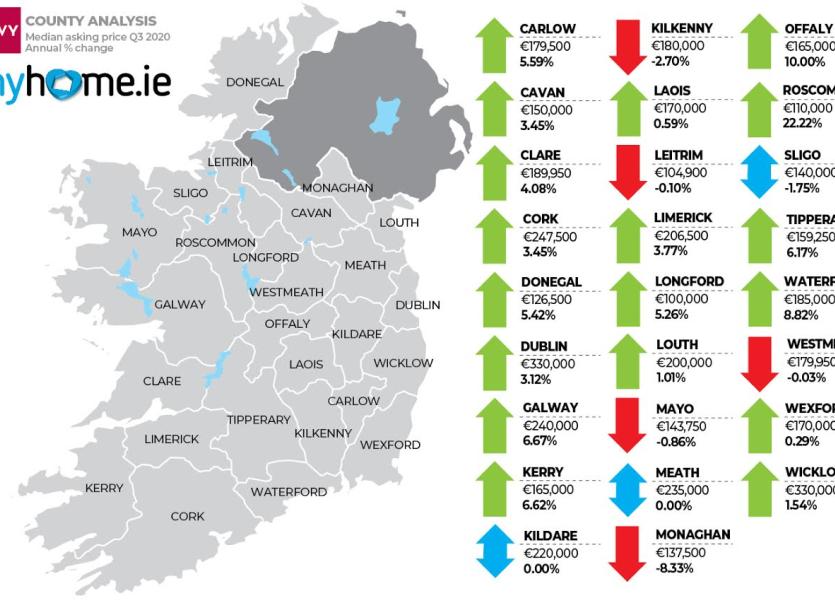 The MyHome.ie map showing the county by county prices of three-bed semis

Property prices in Donegal have gone up by €5,000 during the third quarter of this year, according to the latest MyHome.ie Property Report in association with Davy.

Continuing this trend, asking prices for a three-bed semi-detached house in the county also increased to €126,500 over the quarter, a rise of €6,500. Prices for this house type are also up by the same amount compared to this time last year.

Meanwhile, the asking price for a four-bed semi-detached house in Donegal stayed level over the quarter at €145,000. Prices in the segment increased by €12,500 compared to this time last year.

The number of properties for sale in Donegal on MyHome.ie rose by 1% in the last quarter and was down 12.5% on this time last year.

The average time for a property to go sale agreed in the county after being placed up for sale now stands at nine months.

The author of the report, Conall MacCoille, chief economist at Davy, said that despite the significant increase, we were not likely to be facing another property bubble.

“The news that asking price inflation bounced back to 5% in Q3 2020 could at face value be taken as a sign of a fresh bubble emerging in the Irish housing market.

"However, we would caution that Covid-19 has disrupted the usual seasonal pattern of the housing market and may have flattered the annual comparison.

“Just as we thought the -3% inflation reading in Q2 2020 was an aberration, the same is likely true for the +5% recorded here.

"The truth probably lies close to the middle of these two readings. The third quarter is normally a weak one for pricing, capturing the end of the summer selling season - which has been delayed this year. Hence, asking price inflation will likely fall back in Q4.”

Angela Keegan, managing director of MyHome.ie, said that strong demand and weak supply caused by the suspension of construction at the height of the lockdown were driving the inflation rate.

“MyHome.ie recorded its busiest ever month for website traffic in July, while our latest consumer sentiment survey conducted in August showed that 71% of prospective buyers expected to buy in the next year.

"This shows that buyers appear to have largely been unaffected by Covid-19’s economic impact. On the supply side, meanwhile, stock levels are down 25% compared with this time last year. This combination has led to asking prices being driven upwards.”