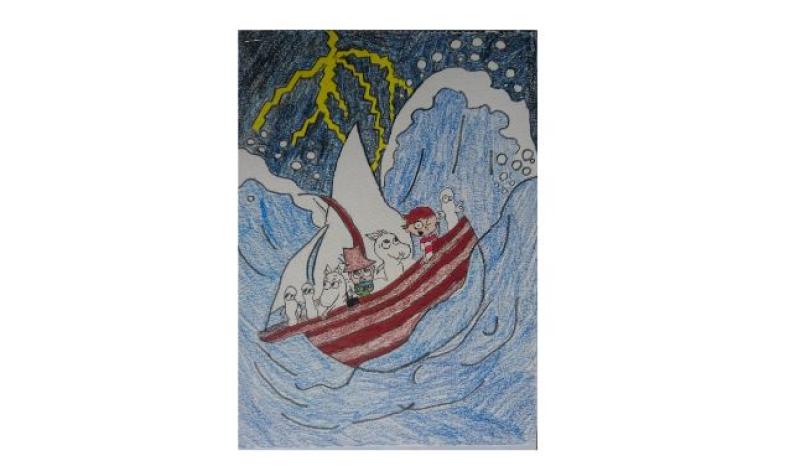 Lucian Browne, 11, of Tubberkeen, Dungloe has been recognised by An Post and Children’s Books Ireland for his entry to their Re-ImagineNation Competition, among hundreds of entries judged by leading children’s book artists Fatti Burke, Jennifer Farley, Tarsila Krüse and Alan Nolan.

Over the summer the Re-ImagineNation competition encouraged children aged 6–12 from all over Ireland to re-imagine themselves as a character in a favourite book, and enter the competition by creating an artwork of themselves in a scene.

The Moomins and the Great Flood by Tove Jansson is Lucian’s favourite book and so was the inspiration for his artwork.

"When I saw that An Post's Re-ImagineNation competition was asking kids to put themselves into their favourite books, I knew right away that I wanted to take part, because every time you read a great book you enter a new world.

"The Moomins and the Great Flood is the first of nine books about these amazing characters, and it was published in 1945, so it's the same age as my grandparents.

"I've read all the Moomin books in order, and then I've read them again jumbled up, because for creatures that hibernate all winter, the Moomins have lives packed with adventure.

I'm so happy to win a prize in this competition because this is what I would like to do when I grow up - write books, paint pictures, make comic books and animated movies - just like Tove Jansson!"

The competition attracted hundreds of entries, with children taking part in weekly workshops on Facebook over the summer, with artists showing the many ways children could re-imagine a story, as well as sharing tips and tricks and showing children the materials they work with.

To help all children irrespective of their circumstances take part in this competition, art materials were delivered to families experiencing homelessness and living in family hubs.

Debbie Byrne, Managing Director Retail, An Post said, “Building on the success of the ImagineNation playbook, developed last Easter for families who were in lockdown and distributed to almost 250,000 homes, we are delighted to announce the fantastic winners of the Re-ImagineNation Summer competition.

"An Post are proud to support and encourage children from all across Ireland to enjoy the magic of books and explore and develop their creativity and self-expression. We are delighted to partner once again with Children’s Books Ireland and some of Ireland’s best authors and illustrators,” she said.

Elaina Ryan, CEO of Children’s Books Ireland added: “We are delighted to work with An Post again on our shared ambitions of making every child a reader and encouraging children’s creativity, and we have been so impressed with the creativity and imagination of so many Irish children.”