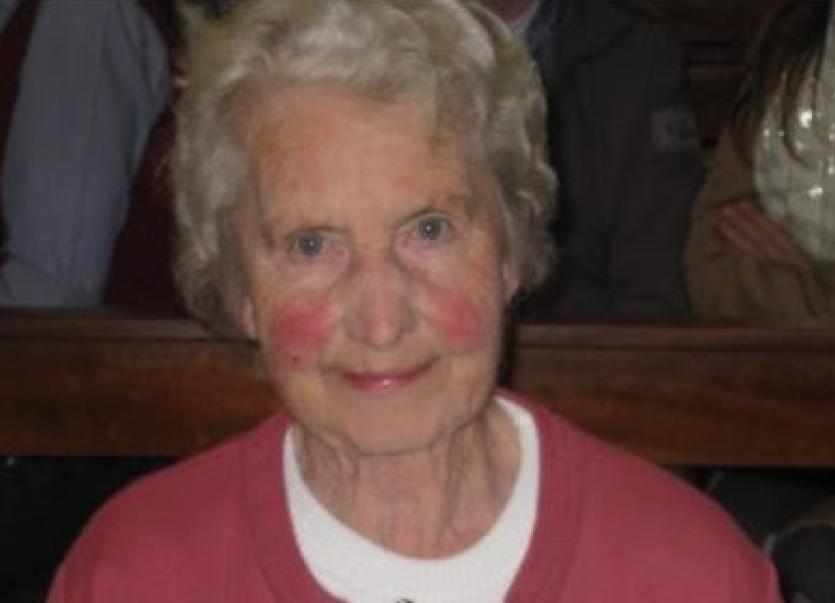 The death occurred last week of one of Ballyshannon's oldest residents, Anna McCafferty, Camlin.
Aged 95, the late Mrs. McCafferty (nee McCabe) spent almost her entire life in the Gatehouse at Camlin. In recent years she spent some time in the Sheil Hospital, where her death took place.
An only child, Anna went to Rockfield National School and was the oldest past pupil of that school.
In his Homily at her funeral Mass on Thursday of last week, Kilbarron Parish Priest, Fr Cathal Ó Fearraí recalled that the first funeral he conducted when he was appointed to the parish 24 years ago was Anna's husband, Sean.
"Anna was very prominent when we celebrated the centenary of Rockfield National School a number of years ago. She had many stories and could tell a lot about the old school in Rockfield, which was knocked down some time ago to make room for the extension to the school.
"She had a great intellect and a great interest in life. She had to leave school early, something that she regretted herself, because she could have made good use of that gift. As many of her generation did, she left school early in order to look after her parents. And also to look after her uncle Francis.
"She spent the first part of her life looking after them in the Gatehouse, which was very much a part of the history of Ballyshannon, because at the back of her house, the Great Northern Railway ran there.
"That was very much part of her life until the 1950s when that railway ceased. She also worked on the small farm, being as many people of her generation were, self sufficient.
"Many people knew Anna, because whenever she met people, she always had great time for them. She was a great social person. These are some of the great memories we will have and that pleasant, warm smile that Anna always had, always welcoming, always friendly,a real genuine person.
"She loved to chat and talk, always had a story. Whenever I made the call to her house, it had to be a late call because Liam and Phyllis (McGowan) would be late coming back from town after doing her shopping. And then Anna would make me sit down and she would always have something to say.
"She had a lovely, caring nature and really focussed on other people. And always very grateful and thankful. A person who valued the gift of life.
"She was always busy, busy about the house whether it be knitting, crocheting or reading. She was interested in poetry. And she had a great interest in local history and genealogy. She was a great storyteller herself and loved to find out about the past and tell others about the past.
"She loved to tell other people about Camlin and the people who lived in Camlin.
"When you visited Anna you always got the smell of the cigarettes that were there. I would say, you know Anna, they are not good for you. "Aargh, sure Father, you have to have some little pleasures in life." She would always get away with it, and it didn't do her much harm for the long life that she had.
"Anna was very independent and loved being at home," said Fr Ó Fearraí, and he also mentioned her great devotion to Padre Pio, being a regular at the Padre Pio Mass when it was held in the church, helping out with Nuala Slevin.
"Anna spent her time in the Gatehouse and now that she has gone to that other gate, the Heavenly Gate, I'm sure there was a great chat with St Peter with many questions being asked and she would be looking for answers before she would get in, I'm sure she got in. She would talk her way in anyhow. She would have got in because she would have earned that, for the way she lived, a lovely way of life, a great love for God and a great love for all of us."
Anna McCafferty was waked in the family home at Camlin before removal to St Patrick's Church, Ballyshannon for the funeral Mass and afterwards she was laid to rest in the Abbey cemetery.
Predeceased by her husband Sean, Anna is survived by her son Seamus; daughter-in-law Anita; grandchildren Sarah, Sean and Tara, as well as a host of friends.