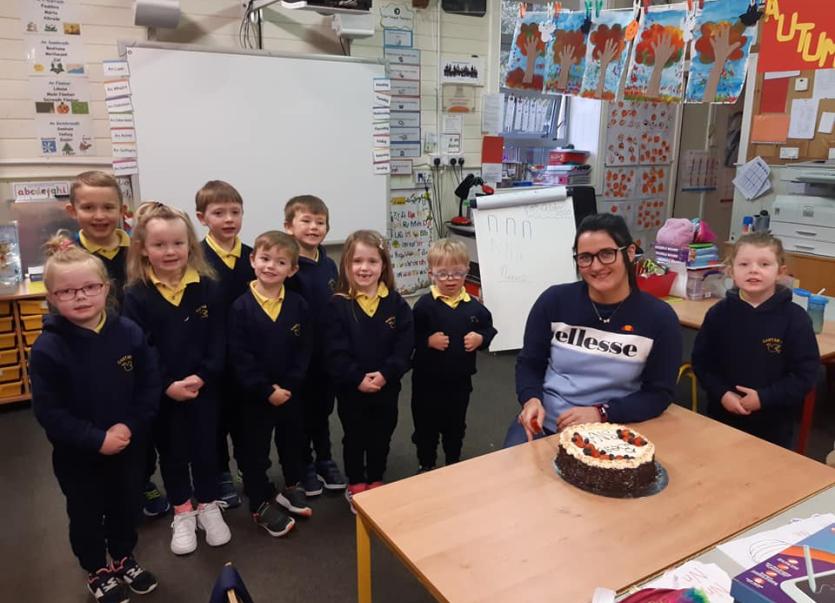 Last Friday, was supposed to be Nicole Russell's wedding day until Covid-19 intervened but that still didn’t stop the celebrations starting out in Gartan National School where she works as a special needs assistant.

Planning a wedding is a major event in anyone’s life but little did the Churchill girl think that her trip down the aisle with her intended, Eric Moore from Letterleague just outside Letterkenny, would first begin in the classroom where she works.

These uncertain times have affected everyone in so many ways but you can only imagine Nicole’s shock when she got to work last Monday only to find out that the pupils and staff had a lovely surprise waiting for her.

Her wedding was due to take place in St Columba's Church, Churchill, but the new Covid-19 restrictions which came into force last Wednesday night meant that only six people could attend the event.

The couple decided to postpone the big day as a result but Gartan principal Joanne Gildea and fellow teachers, Clare Murray and Chloe Rankin, aided and abetted by Nicole’s mum Pamela, who also works at the school as secretary, and of course the 19 pupils, prepared an early wedding present.

“We are focusing a lot this year on wellbeing, emotional and mental health so the children decided to hold a party for Nicole last Monday morning to cheer her up. We had cake, cocktail sausages, finger food and made a presentation of flowers, choclate and a gift as well as a card signed by all the children in the school. It was quite an emotional occasion but everyone enjoyed it,” said Joanne.

As an extra bonus the school gave Nicole Friday off - well who wants to work on their wedding day?

In a special message Joanne summed up the feelings not just of the school community but the entire population in the Churchill and Gartan areas.

“We thought it would be a bit harsh asking her to come on on the day she was supposed to be getting married. At Gartan NS we wish Nicole and Eric all the very best as they make new plans for their special day. We know you will be a beautiful bride when you say ' I do'. The difficult decision to cancel will be worth it in the end.”

What a lovely start to the week by all at Gartan NS - a heartwarming and memorable gesture in these challenging times.