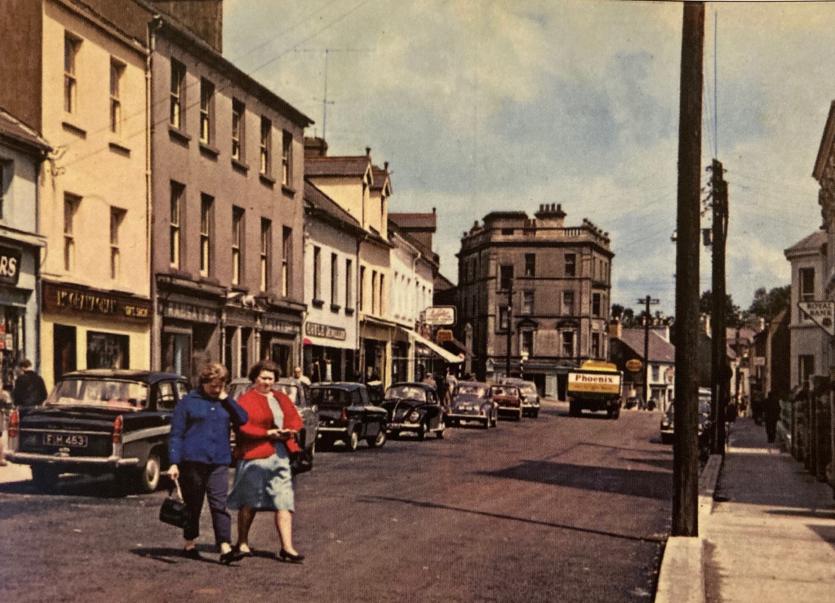 What was the difference between “Willy Swilly” and “Willy Drum”? Who was “John the Store” and “Johnny Dough”? And why was there an underground tunnel under the Main Street of Letterkenny?
These are just some of the questions answered in a new book entitled “Then Again: The Past and Present of Letterkenny Town”.
This new book by local historian Kieran Kelly takes a look at some of the many businesses that once lined the streets of the town and what stands in their place today.
“It’s basically a ‘Now & Then’ style book”, Kieran explains, “using various photographs of Letterkenny past and comparing them with modern photos taken this year.”
Utilizing a rich assortment of photos that have been gathered over the years, some from the National Library with others from private collections, this new book is a pictorial journey into the past with informative snippets of history highlighting the many businesses that once catered to the population of the town, where they were located and what took their place.

This is the second local history book written by Kieran Kelly, following on from his successful 2014 publication “Letterkenny: Where the Winding Swilly Flows”.
While that book was an in-depth look at the entire history of the town, from its Plantation roots right up to the present day, this new book focuses primarily on the businesses of the town and what was located along the principal roads of Ramelton (Port) Road, High Road, Main Street, Church Lane, Market Square and Oldtown areas.
“It has been a very challenging year for a lot of local businesses – probably the toughest year they’ve ever had,” Kieran said.
“ I just hope this book adds some positivity in these tough times by highlighting several of the businesses that are there today in the town and what preceded them on their sites. People remember that times were good ‘Then’, and they will be ‘Again’.”

RECORD
While in no way a complete record of every single business that ever existed in the town (something Kieran asserts would be “nigh on impossible”, for fear of overlooking just one business by accident), the book offers a glimpse into some of the many businesses fondly recalled by locals that helped develop the town into what it is today.
Using a variety of sources, from memories of ‘townies’ to census records and old photographs, the book offers a glimpse into another time and celebrates what has come before.
“The technology is so good today,” said Kieran, “that we can now colourize and zoom into the old black and white Lawrence collection of photos from over 100 years ago available on the National Library website.
“By doing this, we can read the names above the doors of many businesses back then, for example, and compare that with what is there today.
“This book wouldn’t have been possible even ten years ago. The recent advancements in technology have really led to us being able to sit down and look again at these old photos, offering a fresh perspective at a once hidden history.

NATIONAL LIBRARY
“One photo on the National Library website, for example, shows a boat coming up the River Swilly to the Port at Ballyraine in the late 1890s with the town visible in the background. But by zooming in, we can clearly see the construction of St. Eunan’s Cathedral with scaffolding around it and no spire built yet. 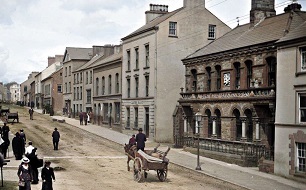 “Adding colour to the photo then lifts it even more, bringing the past to life like never before!”
“Then Again: The Past and Present of Letterkenny Town” is priced at €16.95 and is available in local bookshops from October 28. It is also available for purchase online at www.letterkennyhistory.com, where due to the added cost of postage, it has a reduced online price of €15.
There will be an official online launch of the book on Wednesday, October 28 at 6pm on the Letterkenny History Facebook page.