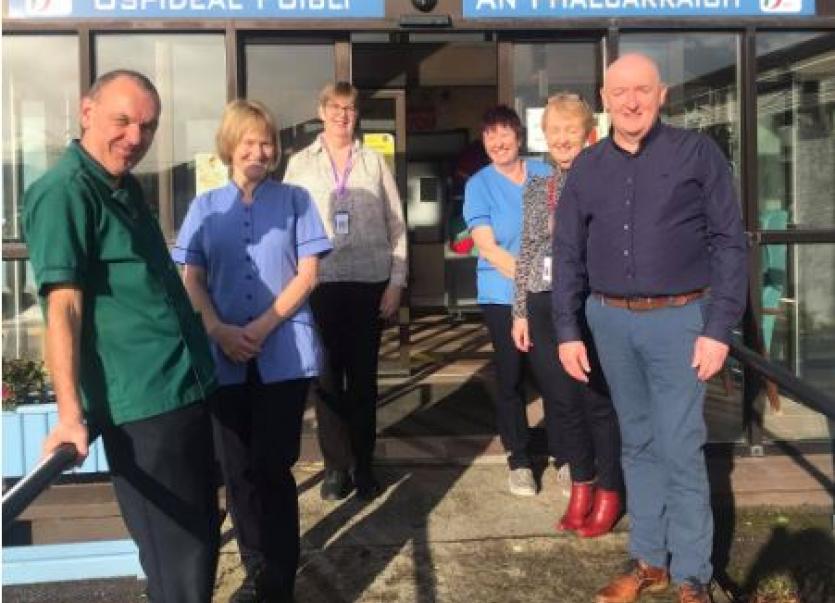 The staff and patients of the Falcarragh Community Hospital celebrated their 40 year anniversary on Tuesday, November 3.
In recent years, as staff looked ahead to their anniversary - it was envisaged that they would have music and food to mark the momentous event.

Pandemic
However, the pandemic changed the course of events but staff and management at the hospital have said they hope to mark the event when it is right and correct to do so.
Down through the years, there have been few homes in the region that did not have someone belonging to them, or a neighbour being cared for, at the Falcarragh Community Hospital.
The hospital is a central part of the local and surrounding communities.

There are staff members who began working at the hospital on November 3, 1980 who continue to do so. These include Margaret Breslin, Bridie Sweeney, Teresa Ferry and Henry Collum.
Margaret Breslin from Creeslough, who works in administration at the hospital, began working there in January 1981.
She enjoys her work at the hospital and says she hopes to see a time when events return to normal.
She said that despite the fact that the staff and patients couldn’t have the celebration they wanted and deserve they hope to have it in the future.

In the meantime, there were some small celebrations on Tuesday to mark the special day.
Food was delivered from Centra in Falcarragh which was very much appreciated by the hospital.
Photographs of the event which were published on social media ignited a positive reaction.
People from across the county clicked on to their page to message staff and celebrate their milestone anniversary with them.
Margaret said she hopes, in time to come, the event can be marked in a proper fashion.