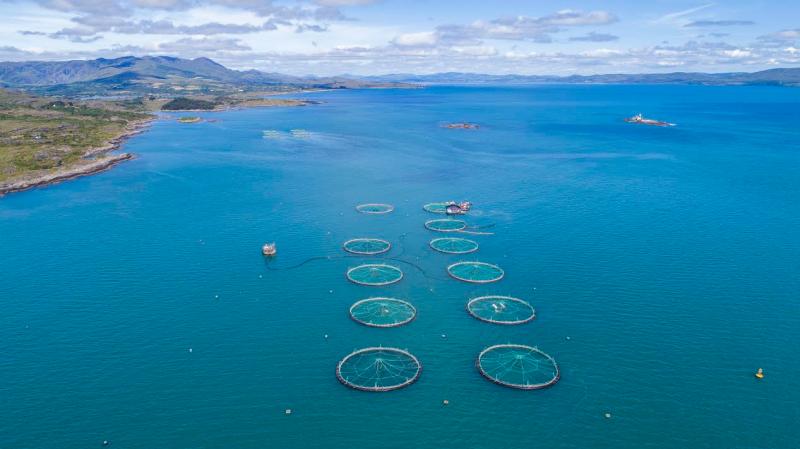 One of Mowi’s Irish sites

The index represents a comprehensive assessment of how some of the world’s biggest farmers of meat, fish and dairy are managing their sustainability risks.

The assessment looked at environmental awareness, climate change, food safety and worker safety. While there are some very stark findings for meat and dairy suppliers, salmon farming companies rank as among the most sustainable and compliant. Mowi is again selected as overall best performer. There are in fact, four salmon producers in the top ten companies.

“We have adopted a global approach to climate change, through the development of a low-carbon business model. We have developed a low carbon transition plan which includes a comprehensive evaluation of our impact on climate change, relevant climate-related risks and opportunities, as well as proposals for climate change mitigation measures. We continue to work towards these targets and be transparent about our progress,” said Mowi’s chief sustainability officer, Catarina Martins.

The authors of the Index felt that this undermined the vocal climate change commitments made by big household names such as McDonald's and Nestlé who currently use suppliers which score 1% or less on the Index’s GHG criteria, meaning they do not declare any GHG emissions or have no public targets to reduce them.

Commenting on the favourable score attained by Mowi, chief HR officer, Anne Lorgen Riise said: “We take the health and safety of all our staff seriously. Across the world, Mowi has had to adapt, innovate and introduce new guidance and training to ensure that we could continue to provide a healthy protein source for consumers during this pandemic whilst minimising the risk of spreading infection. To be recognised by the FAIRR Initiative as creating a safe working environment is extremely significant for us.”

In Ireland alone, Mowi Ireland contributes over €20 million to the domestic economy annually with some 800 Irish suppliers presently doing business with the company here. It has operated successfully in Ireland for 41 years to employing 300 people between its salmon farms and hatcheries in Donegal, Mayo, Galway, Cork and Kerry.

Mowi is a subsidiary of the Mowi Group headquartered in Norway, it is a global force in aquaculture with 14,866 employees operating across 25 countries worldwide and servicing 70 markets across the globe.

The company has also attained the Aquaculture Stewardship Council (ASC) salmon standard which is one of the highest international environmental and social sustainability standards in the fish farming sector for four of its Irish sites.

These awards represent an overwhelming endorsement of the Mowi brand and the high standards which the company consistently aspires to and succeeds in reaching. As a food production company, stock welfare and reaching the highest standards of production through best practice are of paramount importance.