Beautiful, Bracing Bundoran is good for the soul and mind 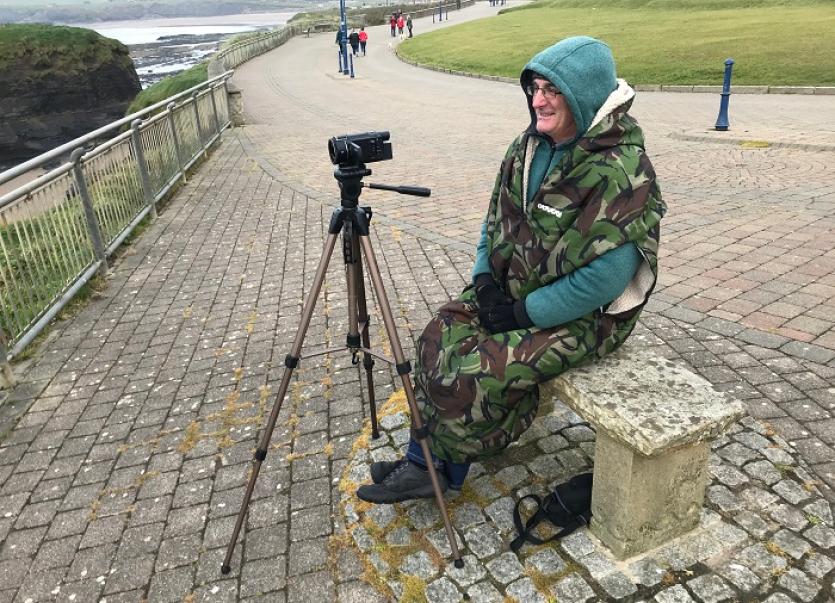 Ray McDaid (pictured) is father of professional surfer Gearoid McDaid. Here Ray is patiently recording another surf session of his son's at the Peak in Bundoran at the weekend

It was a cold but not too windy day last Saturday in Bundoran. It was a case for the warm coat, rather than the brolly.
But it was a beautiful day for a walk and as we enter week three of the second 2020 lockdown (or Level 5 restrictions if you are sensitive to the previous term) people are well dressed up for the weather.
Neither is it a surprise to see so many locals out and about. At this time of the year, even without Covid-19, they have it to themselves.
After all it was the clean crisp air of the south Donegal resort that made it a Victorian favourite for many souls a century and a half ago.

A Garda patrol car was parked in the Astoria car park, down by the beach. It would be nice to think that they were having their lunch looking out over Rougey, but in truth they were there for other reasons to do with the safety of cars. It was a reassuring sight.
It was also a perfect day for surfing and in the distance the surfers can be easily identified in their mainly dark attire off the Peak, one of their firm and favourite locations.
A man who first looked like he was in the trenches with camoflauge turned out to be Ray McDaid (pictured). His lad Gearoid, has become one of the best pro surfers about and the Peak one of his son's, favourite set of waves to surf.

Ray supports him in whatever way he can and recording some of the waves that he surfs, is a relaxing pastime.
Do check Gearoid out on his Facebook page.
Many see Bundoran as heaven on their doorsteps.
The Peak (which also has a restaurant named after it) is easily identifiable, located close to the Horse Pool, which later became known as the thruppeny pool, when changing rooms were built there, sometime in the fifties.
Beside it is an outcrop that is separated by a matter of yards from the mainland.

We called it 'no-mans land' as youngsters which I suspect was linked to World War One and its Finner Camp connections and the use of the adjoining horse pool.
Nearly every second person we met was a local or from 5km abouts and it was clear from their appearance, just how good and how important it was to get out and catch a bit of the famous bracing Bundoran air.
The few that I managed to converse with (appropriate social distancing notwithstanding) agreed how good it was to be out and about, invigourating for both soul and body.

You couldn't blame them as the television stations were just spurting out end to end coverage of the American Presidential elections results and how devisive the 2020 campaign became.
There are many equally beautiful walks in your local area and when the weather calms for a day or two, get out there.
It did me the world of good. These are tough times and getting back in touch with nature is a bottle of medicine that costs nothing and is more beneficial to your health!