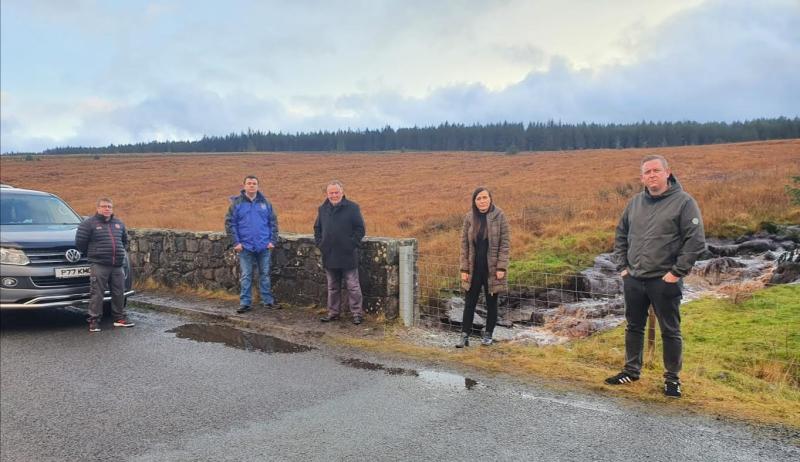 Sinn Féin representatives from Tyrone and Donegal have called for urgent answers on Friday’s landslide near the Meenbog Wind farm which has caused substantial damage to the Mournebeg river and fish farm.

Upon visiting the site and seeing at first hand the devastation caused, West Tyrone MP Órfhlaith Begley said their representatives took immediate action in contacting all relevant statutory agencies regarding the emergency plan, the safety of the drinking water in the area.

“We have also called for all works to stop until a full investigation has been carried out and the full extent of the damage caused is known.

“We will also be raising this directly with the relevant Executive ministers and will be continuing to work with Cllr Gary Doherty and our Donegal TDs to ensure a joined up approach is adopted.

“Further to Friday’s landslide NI Water say the drinking water should not be affected from the Ardstraw treatment plant due to the sensors they have in place which can close the inlet, they have also been taking samples.

“The Loughs Agency are extremely worried in relation to the fish stock in the Mournebeg River and the Derg River below Glassagh Bridge but this is obviously hard to assess at this early stage, SF has an urgent meeting request in to the Loughs Agency to see what exactly was signed off on in terms of Environmental Statement.

“The planning authority and environmental health have been contacted as a consultee we need to ensure they are consulted as part of a revised environmental statement.

“We will be contacting DAERA Rivers Agency to get a sense of how this leaves the river system and the possibility of this causing further flooding North of the landslide on the Mournebeg/Derg river,” he said.