HSE Specialist: Christmas in Donegal lies in people's own hands 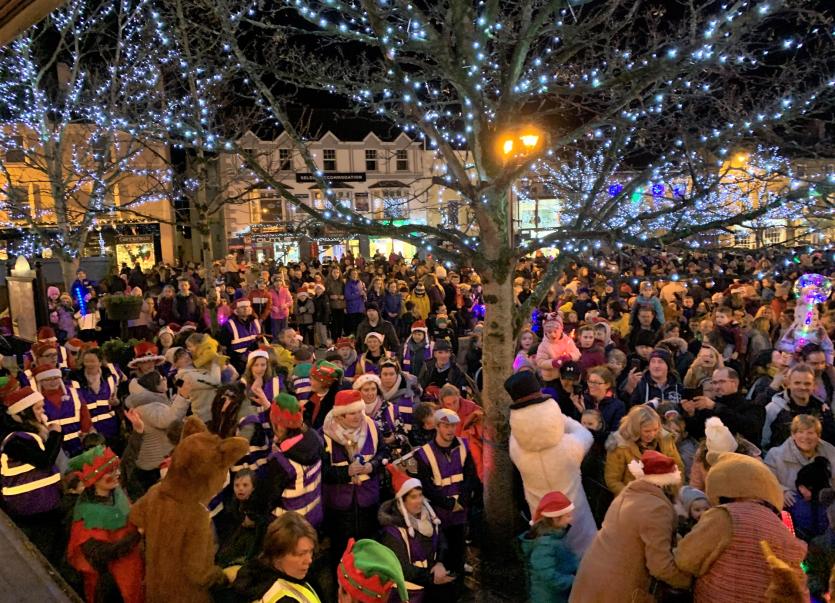 Christmas celebrations on the Diamond, Donegal Town were always part of the festive season

The fate of Donegal and how many Covid-19 cases there will be, is largely in the hands of its own population in the lead up to Christmas, a leading specialist in public medicine has said.

"It's in the people's own hands. It will be the people themselves and their own behaviour. I would certainly hope that Donegal can have a very good Christmas, though it will be different, but they can, by their behaviour now, improve Christmas for everybody in six weeks time," Dr Aidan Ryan, HSE Specialist in Public Health Medicine for the northwest told the Donegal Democrat.
"While Level 5 restrictions may be lifted from other counties, it is quite possible that those counties that still have high levels, they will reset at a different higher level. That's quite likely," he explained.

In terms of how Donegal might be treated as opposed to other parts of the country when the restrictions come up for review at the end of the month, he added:

"It is important for Donegal people to think about Donegal and think about saving jobs. Donegal has been dealing with higher restrictions than most of the other counties for a long time. I think that, only Dublin, has been in higher restrictions for longer."
"We were in Level 3 for a couple of weeks, while the rest of the country was in Level 2.
"If restrictions remain, longer than the rest of the country, it will be harder for jobs, protection of the health services and it's not just Christmas."
"It's about trying to save lives and clearly Donegal is the outlier. At the moment, if any county is left behind, it will be Donegal and other counties. We can't really judge what is going to happen in two weeks time. But it all comes down to behaviour.
"We know that schools are safe, but we are seeing transmission in family homes, that shouldn't be at Level 5. But it really comes down to people's behavior.

Donegal challenges
He told the paper that Donegal remained top of the 14 day incidence rate of transmission with Limerick next highest.
"Donegal is well ahead, others like Cavan and Monaghan have managed to lower theirs."
As to why this was the case, he said: "It's very hard to say. There is something about Donegal that we haven't managed to get the numbers down. They were always one county; they were the highest. I think that there are a number of issues in Donegal, one is that we had high numbers for a long time, from the very start of this pandemic, so there is a lot of this virus has got into almost every part of Donegal.
"The crux of it all comes down to behaviour. There have been cases at wakes. Funerals should be fairly well controlled, but there have been transmission at wakes. The Church is a controlled environment, whereas wakes should not happen.
"We have seen it crop up in all places in the county, but more so in the electoral districts near the border. That is partly explained by the rates being very high for some time, even before the Level 5 restrictions."

Letting their guard down
Dr Ryan explained:  "People are already doing an awful lot. Ths virus spreads very easily and if we didn't have any restrictions, it would be sweeping through the population.
"We are already doing an awful lot. The numbers have stalled around the country and it is getting hard to get those numbers down further.
"But one key thing is that people are letting their guard down when meeting people that they know. In family homes, going around to friends, wakes and with cross border traffic, it's hard to qualify how much effect that is having.
"So the crux is people's behaviour and it is those things - to reduce your contacts, keep your physical distance., social distance, mask, handwashing and if you have symptoms, phone your GP and isolate yourself. Those are the key things. You get this from other people. So it is really about reducing your contacts and going around to visit people, as well. Whatever setting we find it in, that is the crux of it.
"If we stay at these levels I would be surprised if we remain in step with the rest of the country, if the rest of the country's restriction levels drop down to a different level.
I'd be surprised if we dropped down to the same level, so certainly there is a danger there that restrictions of some sort will remain in Donegal. And the framework is designed in that way, county by county."

National picture
He concluded: "Nationally, the downward trajectory has stalled. We are amongst the lowest in Europe. in terms of numbers. We should congratulate ourselves on that. But it isn't easy to keep those numbers down, people are making sacrifices, and we also have vaccines which is good news. The safety trials are underway and we can feel quite reassured that they will be safe."