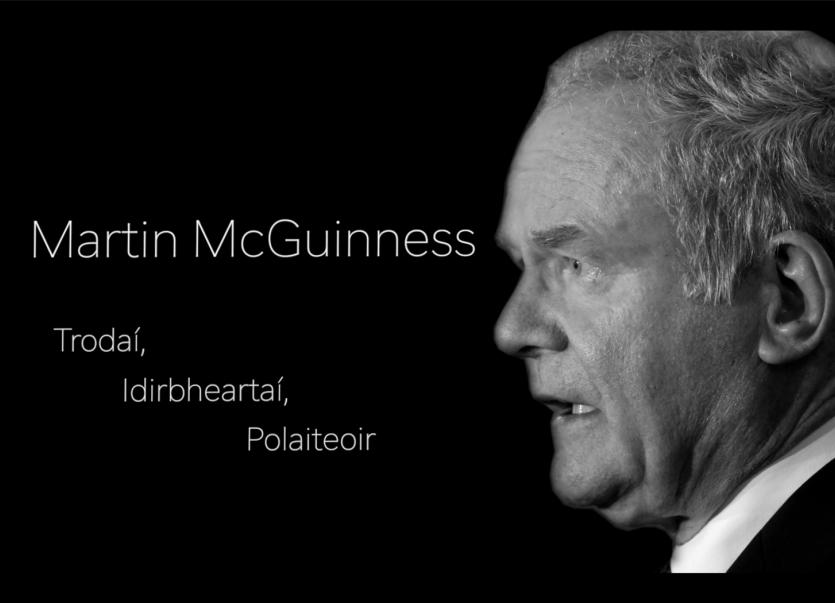 The world premiere of a dramatic documentary of Irish Republican Martin McGuinness will be broadcast simultaneously to film festival audiences in Belfast, Cork and Foyle on November 25.
Award winning director and producer, Sonia Nic Giolla Easbuig said work began on this documentary in 2013 and she is exceptionally proud that the documentary is being premiered in this fashion, to such a wide audience.

Poverty and strife
The documentary is called ‘Trodaí, Idirbheartai, Polaiteoir’ and lasts a total of 84 minutes.
This documentary promises to be of huge interest as it delves back in time and encapsulates the life of a Derry man, raised in the face of conflict, poverty and strife, through the eyes of his family, politicians and those who knew him best. This documentary will showcase the life of McGuinness from the perspective of those who grew up with him, those who followed in his footsteps, those who walked the corridors of power with him and from those who walked the other way.

This is 'his' story

Speaking in Irish, Sonia said: “This is his story told by those who spent their lives with him.”
The list of notable politicians and former politicians in this documentary is extremely impressive, former U.S. President Bill Clinton, Senator George Mitchell, former British Prime Minister, Tony Blair, former Taoiseach Bertie Ahern, former Northern Ireland first minister, David Trimble, DUP MP Ian Paisley Jnr, Sinn Féin President Mary Lou McDonald and former party leader Gerry Adams.
With such notable people featuring, editing the content proved a daunting task but one which the Gaoth Dobhair-native, Sonia Nic Giolla Easbuig was more than capable of.
“Some of the interviews are very interesting. People will hear stories about Martin McGuinness that they have never heard before. You will see never-before-seen footage of him. This documentary is not about the conflict and it is balanced,” Ms Nic Giolla Easbuig said.

Colin Parry who lost his 13-year-old son in an IRA bombing in 1993, will feature in the documentary.
“This is Martin McGuinness’ story from beginning to end and this documentary will feature his final interview. This documentary is done from a first-hand perspective,” Sonia said.

From Gaoth Dobhair to the former president of the US

The documentary has been pieced together and edited by those at LIGID TV teo which is based in @gteic Gaoth Dobhair.
“It was kind of surreal talking to the former president of the United States from an office @gteic on the Gaoth Dobhair industrial estate,” Sonia said.
However, the zoom call which was agreed to last for 20-minutes lasted for twice that time as Mr Clinton continued to partake in the interview.
Funded by the Irish Language Broadcast Fund and the Broadcast Authority of Ireland, the feature-length film was commissioned for Irish language station TG4 and Welsh language channel S4C.
For those of you who wish to see the documentary on November 25 -tickets are free but you must reserve your place online.

So go to the Foyleside, Cork and Belfast film festival sites.
The documentary will broadcast on TG4 on January 6, 2021.