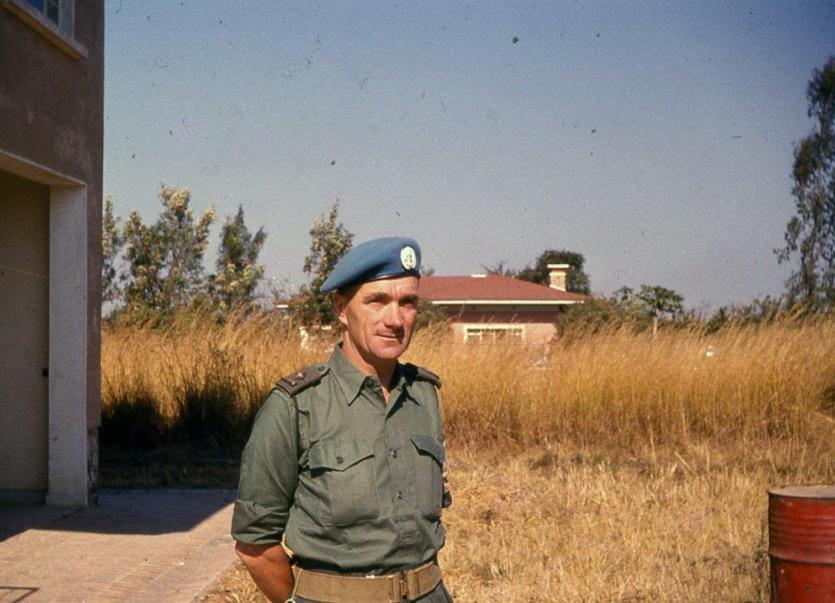 A new review group to examine the issue of medals for gallantry for some of the Irish soldiers who served on a UN peacekeeping mission which came under attack in the African state of Congo in 1961 has been set up.
This new review will be of great interest and importance to local families who had family members involved in “The Siege of Jadotville”. There were eleven men from all parts of Donegal, or living in the county, who fought at Jadotville.
On return from The Congo, 33 men from A Company were recommended for the Distinguished Service Medal (DSM) for gallantry by their commanding officer, Colonel Pat Quinlan, arising out of the siege which occurred in September, 1961.
Of the 33, five were also recommended for the Military Medal for Gallantry (MMG), the Irish army’s highest award.
At the time his recommendation was considered but not acted upon.
Recently however, there has been group recognition for the soldiers, but this latest move is specific to the 33 soldiers named by Col. Quinlan.
The setting up of the review group was confirmed recently by the Government. It will be made up of a panel of external experts and will include ex-military officers, a historian and an academic to examine the full details of the case.

Mining town
On September 13, 1961, 155 Irish soldiers from 35th Infantry Battalion, ‘A’ Company were sent to protect the locals in Jadotville (modern Likasi), a small mining town in the Congo.
Among the 35th Infantry Battalion were soldiers from or living in Donegal - the late Seamus (James) ‘Congo’ O'Kane, James (Jim) Gormley, the late Sean Kerr, the late William George Duffy, Harry Hegarty, the late James Harper, Michael McDermott, the late Patrick Nicell, the late Patrick Gildea, Leo Boland and Robert Bradley.
They held off the attack for five days despite being ill-equipped and outnumbered, before they were forced to surrender.
The Irish soldiers held out for five days against an overwhelming force without suffering a single fatality, while inflicting huge casualties on the enemy, some 300 dead and 750 wounded.
On their return to Ireland, the bravery of the men who fought in Jadotville was not recognised and many were left with a sense of embarrassment about surrendering.
The action of their commanding officer, Colonel Pat Quinlan, is cited in military textbooks worldwide as the best example of the use of the so-called perimeter defence.
Minister for Defence Simon Coveney told the Seanad recently that the issue of these medals for gallantry will be considered by an independent group of experts.
RTÉ reported: “Mr Coveney said that from 13 to 17 September 1961, the men of A Company were under almost constant attack and at the end of the siege were taken prisoner before being released on 25 October.
“He said that in 1962 and 1965, a constituted medals board considered the issue of the awarding of medals, but none were awarded for any citation which mentioned Jadotville and despite a subsequent review, the board was not prepared to alter its findings.”
Speaking on RTÉ's Morning Ireland, Noel Carey, the youngest of ten Irish Army officers at Jadotville, welcomed the review.
"I hope we the veterans will get a chance to give our story to the board when the time comes.
“This was totally denied to us when we came back in December 1961 to a situation where nobody knew this happened,” he said.

Collective role
In 2016, the 'A' Company was awarded a presidential unit citation for its collective role in the siege.
In 2017, the government decided to award the newly commissioned 'Jadotville Medal' to each member of the battalion, including to the families of members who have since died, in recognition of the courageous actions of the men during the siege.
However, campaigners want the original gallantry medals as recommended by Col Quinlan to be awarded to the 33 men named by him and action on this is now being taken.
The review group has been set up to examine this original recommendation by Col Quinlan.
Mr Coveney told the Seanad that he and Vice Admiral Mark Mellett, chief of staff of the Irish Defence Forces, had come to the conclusion that an independent review group was the best way forward.
The group will “examine the entire case, including new evidence if any is available”.
The board will include ex-army officers, a historian and an academic who will be able to frame the siege of Jadotville in its proper context and what happened in some detail.
“We will have genuine and independent expertise examining this case,” the minister told the Seanad.
It will report to the chief of staff and then to the minister by next spring.

Valour and courage
On Saturday, September 17, 2016 the members of the 35th Infantry Battalion A Company, were awarded the Presidential unit Citation for their valour and courage.
Then Minister for State at the Department of Defence Paul Kehoe presented the citations to surviving veterans and family members of those now deceased at Custume Barracks in Athlone.
It was the first time in the history of the Irish State that an entire unit has been honoured in this way.
At that presentation the Minister said: “The United Nations Operation in Congo was the first peacekeeping mission in which significant numbers of Irish soldiers took part.
“A total of 6,000 Irish soldiers served in the Congo from 1960 until 1964 and I want to take the opportunity to recall the contribution of all who served in the various Irish contingents over the course of this long Mission."
He concluded by saying, “Ireland can be justifiably proud of all our brave men and women who have contributed to the cause of peace and security.
“Our continued participation in United Nations missions illustrates the very positive and practical difference that small countries, like Ireland, can make in the world’s trouble spots.”