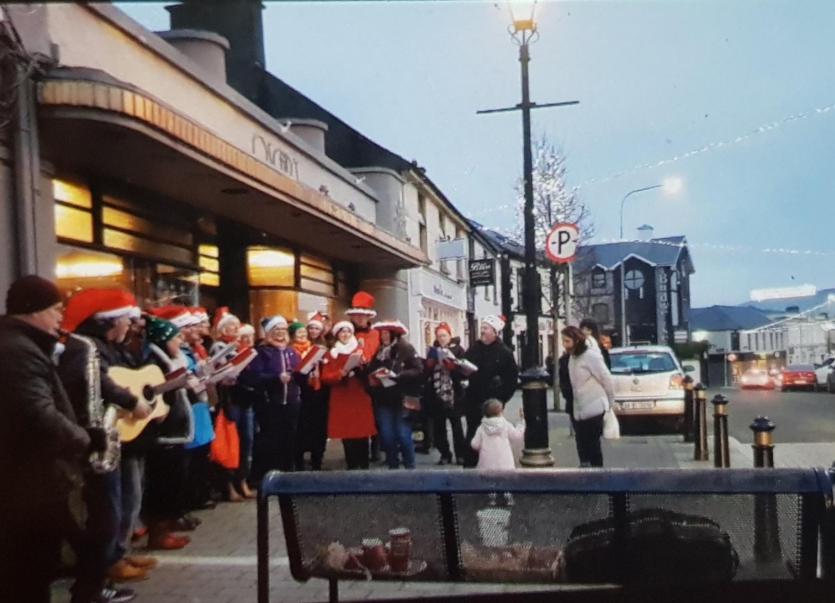 An intrepid group of Buncrana people are planning to brave the icy waters of Ludden beach as a winter solstice fundraiser for the Inishowen Foodbank.

Normally to be found singing Christmas carols and doing a charity bucket collection on Buncrana Main Street the Saturday before Christmas, The Motley Crew, are, this year, taking to the Swilly instead.

Speaking to Donegal Live, Miriam Killeney, a member of The Motley Crew, which originated from the Buncrana Environmental Group, recalled how the group was 'formed' in 1992.

Miriam said: “The Motley Crew usually gather on Buncrana Main Street the Saturday before Christmas. It is mostly the same group of people who have been involved all of these years. We don't rehearse, we just turn up, sing Christmas carols and do a charity bucket collection. Over the years we've ended up getting saxophone players and guitar players and one thing and another to join in.

“One year, usually, we donate our takings to a local charity such as St Vincent de Paul or the Nursing Unit and the next year we would donate to Focus Ireland or Trócaire.

“We are always outside Oscar's restaurant. Before it was Oscars, away back, it was Kathleen Barr's Travel Agency and before that it was something else. We have been there in the same place a long time.

“There are swimmers, the Dippers, that do the Lough every Sunday and then there are the Pointers so I reached out to those groups and, so far, I have six definites for the winter solstice fundraiser for the Inishowen Foodbank. I need people who are taking part in the event to be sponsored because I want to try and raise as much money as we can for this good cause, as much as we would had we been doing a bucket collection on Buncrana Main Street,” said Miriam.

With Covid-19 preventing The Motley Crew from singing or doing a bucket collection this year, Miriam thought the Ludden swim would create “a bit more positivity” this year. “God knows,” she said,”we all need a bit of positivity at this time.”

Miriam added: “The swim will take place at Ludden beach on December 21, which is the solstice. I and some of the other Motley Crew are currently training to do that, in the very, very cold water, in our togs, we will not be wearing wetsuits.

“We have chosen the Inishowen Foodbank as our charity this year because it is under increasing pressure because of the growing food poverty in the peninsula due to Covid-19.

“We feel this is a very relevant charity. We think the winter solstice is a day people look back and put what has happened in the past. They also look forward to the longer days and the positivity that's coming and the vaccine.

“We feel the swim is a good way of getting the community together and a good way of focusing on the future and focusing on what's happening because, naturally, the Earth is on another cycle so things are changing that are beyond our control and hopefully in a positive way,” said Miriam.

Inishowen Foodbank was Established in April 2020, in response to Covid-19. The Exchange Inishowen, together with Spraoi agus Spórt (Carndonagh), Trinity Court (Newtowncunningham), Muff Red Cross and Moville Family Resource Centre in partnership with Moville GAA, set up a temporary foodbank to serve the peninsula.

Ruth Garvey one of the co-organisers of the Inishowen Foodbank said the group is about providing a bit of “extra support” for people who find themselves in difficulty with the lockdowns and employment changes because of Covid-19.

“We have been absolutely overwhelmed, as always, by our wonderful community. The response has been tremendous. People have realised anyone could face unexpected difficulties because of what's going on. A sudden big bill, your car breaks down or something, and it gets really difficult.

“People are finding it difficult and, just to get that little bit of top up support, just to make sure no one goes hungry is important, not just at this time of year but at anytime of the year. We want to make sure everybody has a chance to have healthy food,” said Ruth.

Winter solstice swim donations to the Inishowen Foodbank can be made online at: http://www.exchangeinishowen.ie/donate.html. Anyone who is interested in taking part in the Ludden swim is asked to contact the Motley Crew Singers via Facebook.