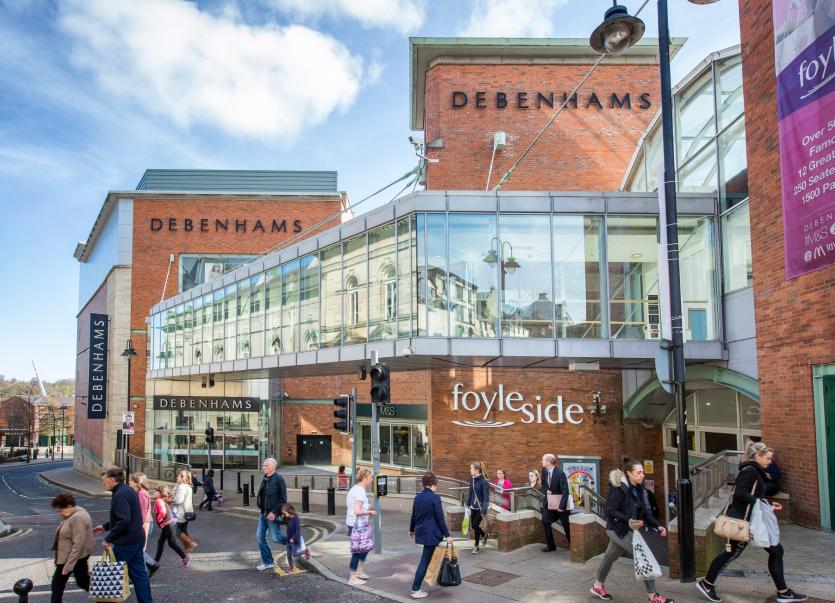 A new tenant has been found for the massive Debenhams store which is closing at Derry's Foyleside Shopping Centre.

The Frasers Group, which is owned by Sports Direct International plc, today said they have acquired the anchor building occupied by Debenhams, which recently announced that the local store is to close.

It's news that will be of interest to customers from Donegal who prior to the Covid-19 restrictions, used the centre on a regular basis

The Frasers Group said the 'off-market deal', which was handled by property advisor, Savills, will see the opening of a new Frasers department store at the centre next year – similar to its anchor store at Victoria Square in Belfast.

Paul Wilson, Director of Retail at Savills, said: “We were aware of the necessity for Debenhams to adapt and change its in-store offer to meet changing consumer demands and in the case of Folyeside, this was likely to require a store downsize and lease re-structure.

“As retained consultants and leasing agents to the landlord of Foyleside, we were very aware of the risk associated with the Debenhams covenant and likely capital expenditure required to reconfigure the store and re-purpose the surplus space which would have been created.

“Knowing the limited pool of end users for this space and that Debenhams business was likely to enter a CVA, we pursed Frasers and successfully struck a deal to sell the freehold interest.

“The Debenhams CVA gave Frasers the ability to secure vacant possession from a landlord break clause,  but a liquidation will speed the process.

“Bringing Frasers to Foyleside is a massive positive for the centre and the city as a whole.

“Employing some 200 staff, this will replace the Debenhams with a new relevant retail offering to the centre together with a huge investment to refit the property which we hope will include the stores aspirational Flannels fashion hall.”

“In what has been a difficult trading environment in 2020, this significant investment will enhance the city centre retail offer as a whole and will reinforce Foyleside as the top regional shopping destination in the North West.

“Debenhams will continue to trade through the Christmas period in conjunction with the fifty other stores in the  centre, with late night shopping until 11pm  commencing 11th December with a busy  Christmas  period  anticipated.”